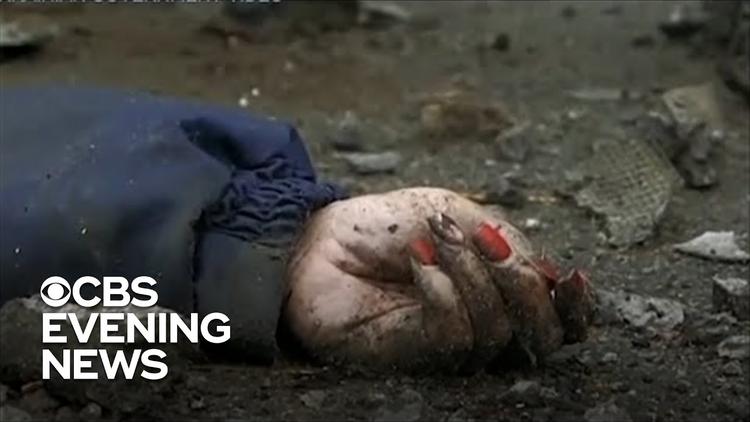 Ann Arbor (Informed Comment) – In an address on Tuesday to the United Nations Security Council, Ukrainian president Volodymyr Zelensky compared Russia to the ISIL (ISIS, Daesh) terrorist group that took over eastern Syria and northwestern Iraq 2014-2018. His immediate comparison was of the brutality of Russian troops toward the civilian population in Bucha and other cities, recalling ISIL’s massacres of Yezidis, Shiites and pretty much anyone they did not like or trust.

While the comparison is outlandish, it is worth thinking about the similarities between the project of Russian President Vladimir Putin and ISIL leaders such as Abu Bakr al-Baghdadi (r. 2013-2018). For one thing, it is refreshing to have the leader of a Christian nation called a terrorist after a long period in which such terminology was applied in a racist manner mainly to Muslims, such that American white nationalists most often escaped the designation.

So here are some ways Zelensky may be right:

1. One point of comparison is the tactic of brutalizing the conquered population to cow them and to make resistance less likely. ISIL bears the same relationship to Islam that Jim Jones’ People’s Temple (of drinking the Kool Aid fame) bore to Christianity. The Qur’an forbids aggressive warfare, says taking a single life in a wrongful killing is like murdering all humanity, and says POWs should be ransomed or released. (I discuss these matters in my book, Muhammad: Prophet of Peace amid the Clash of Empires.) In contrast, ISIL leaders developed a doctrine of “acting like wild beasts” (al-tawahhush) — acting treacherously and murderously and massacring innocents, for the purposes of social control.

Russian soldiers in Bucha may not have had a similar formal doctrine, but they certainly acted like wild beasts, indiscriminately killing innocent noncombatants, in the streets, in their cars, and coming back from the grocery store.

2. Then, ISIL as an organization advertised itself as a caliphate, a theocratic empire attempting to revive the past glories of Islam. Since the actual past glories of Islam involved translating Plato and Aristotle into Arabic and commenting on them in original ways, the invention of algebra and the crank-shaft, and advances in optics, surgery and medicine in general, al-Baghdadi and his goons had a very weird notion of both the past and of the Abbasid caliphate.

Vladimir Putin, like Abu Bakr al-Baghdadi, views himself as a revivalist. Just as al-Baghdadi thought Islam had become weak and dominated by foreigners, so too does Putin feel Russia is supine and subjected by NATO.

3. Then there is the matter of the ruthless use of religious symbols. Al-Baghdadi’s ISIS ruling council was dominated by ex-Baathist Iraqi officers who had been socialist secularists. It is unclear whether the defeat of the secular Baath state by the US army caused them to turn to religion, or whether they became convinced that a melding of religion and nationalism could bring them back to power, so that they used religion cynically.

Believe it or not, religion is also important to Putinism. According to Lena Surzhko Harned , Putin’s “vision of Russia connects the state, military and the Russian Orthodox Church.” So, there is a religious revivalist element to Putin’s wounded nationalism, just as there was in ISIL. Putin envisages a Russian nation contiguous with Eastern Orthodoxy, which is why he mainly wants Eastern Ukraine. In the west, Ukrainians tend to be Roman Catholics. Like the Baathist officers around al-Baghdadi, Putin is an ex-Communist who now affects at least a vague Christian identity (he says, via his mother). It is more likely that his deployment of religious sentiments is just as cynical as that of the ISIL leaders.