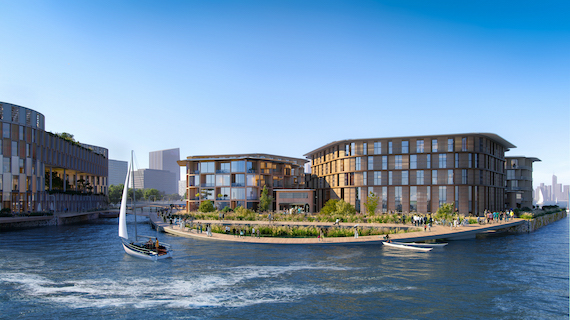 Ann Arbor (Informed Comment) – UN Habitat, the municipality of Busan in South Korea, and the company OCEANIX are responding to the challenge of sea-level rise by building an artificial floating city off the coast of the country’s second-largest city. A prototype is expected to be in the water as early as 2025.

Although a quick halt to the burning of fossil fuels would almost immediately halt further heating of the earth, a certain amount of global heating is by now baked in and cannot be avoided in the short to medium term. Some scientists estimate the short-term rise as likely to be a little over another half-degree C. (1.1 degrees F.) even if we halted emissions today. Surface ice will therefore go on melting and seas will keep rising.

NOAA projects that sea level along the US coastline will rise a foot in the next 30 years, as much as it rose in the full past century.

Coastal cities are especially at risk for loss of neighborhoods and storm surges that cause disastrous flooding. We have seen these episodes in the past decade in New York and Houston.

Although the first imperative is avoiding the worst outcomes of the climate emergency through rapid halting of the use of gasoline automobiles, coal for heating and power, and ultimately methane gas, we also have to plan for the future and implement steps to be resilient in the face of the changes that are coming.

Busan-OCEANIX will run on photovoltaic solar panels placed on the city’s rooftops and also floating beside it. It will produce no CO2 emissions. Everything will be recycled, including water. Food will be grown with hydroponics, and fertilized with waste from fish and scallop farms cultivated beneath the city. Its first module will have 3 platforms and house 12,000 persons, but it is scalable and can be expanded to more than 20 platforms and a top population of 100,000. Connected to Busan by a flexible bridge, it would replace coastal land likely to be swallowed by the ocean over the coming decades.

The first three planned platforms are residential, a research hub where the hydroponics are, and a living/ recreation/ socializing area.

The Maldives, a set of 1192 low-lying islands in the Indian Ocean that is in danger of going underwater, is likewise planning similar floating cities. Whereas most of Busan is 98 feet above sea level and so will survive a projected four-foot rise by the end of this century, the average elevation of the Maldives is only 2 meters (roughly six and a half feet). The bulk of the Maldives’ population may have to emigrate to the floating cities.

According to Tim Nelson at Architectural Digest, Busan-OCEANIX will be constructed of Biorock, an innovative material that uses a current to add a limestone layer over materials such as steel. It is self-repairing over time. This is an important step, since Biorock is stronger than concrete but concrete is a high-carbon material.

“The Biorock™ process uses electrically conductive materials like ordinary steel, the cheapest and most widely used construction material, to build structures of any size of shape in the sea. With the Biorock™ technology, the steel is completely protected from corrosion, first the rusty steel is un-rusted as red rust quickly turns grey and black and is converted back to iron. Then the structure turns white as limestone minerals that are naturally dissolved in seawater grow over the surface, producing a constantly growing hard rock coating. When grown slowly (less than 1-­‐‑2 centimeters per year) this material is around three times stronger than concrete made from ordinary Portland cement.”

The required electricity will be provided by solar panels. Biorock actually takes a bit of CO2 out of the atmosphere.

Resilience in the face of the climate emergency requires imaginative solutions to the challenges we face. Artificial islands could cut down on the 200 million climate refugees the UN is projecting by 2050.