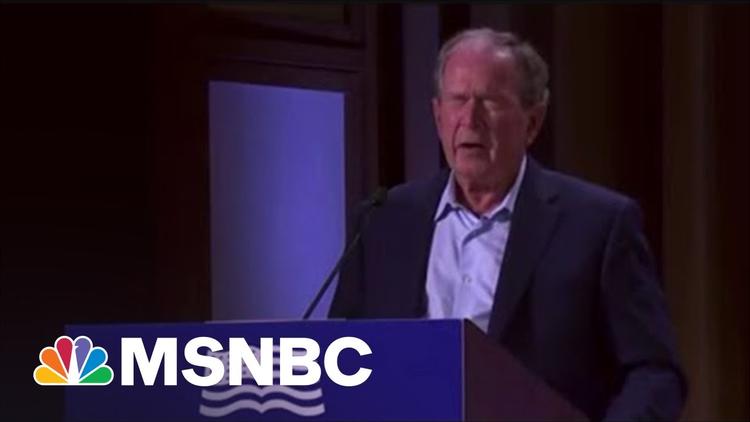 Ann Arbor (Informed Comment) – Michael Williams at the Dallas Morning News reports on George W. Bush’s speech at his presidential center at Southern Methodist University, during which the former president made what MSNBC’s Mehdi Hassan called “one of the biggest Freudian slips of all time.”

Bush denounced the rigged elections that produced the dictatorship of Vladimir Putin in Russia and added, “The result is an absence of checks and balances in Russia, and the decision of one man to launch a wholly unjustified and brutal invasion of Iraq — I mean, of Ukraine . . . Iraq, too. I’m 75.”

I pointed out here at Informed Comment a couple of months ago that the “US would be on firmer Ground declaring Putin a War Criminal if George W. Bush had been Tried.”

I’d also like to say that the Bush administration was one of the most repressive in recent history when it came to dissent. Demonstrations in New York against the war during the Republican National Convention were illegally broken up and the demonstrators were physically attacked. Bush violated the fourth amendment extensively by spying on people through their smart phones and making the telcom companies give the government back doors. His administration punished Ambassador Joe Wilson for blowing the whistle on the phony story of Iraq buying uranium for bombs from Niger by outing his wife, Valerie Plame, as an undercover CIA operative and burning her anti-proliferation efforts.

At one point, someone in the White House even had the CIA very illeglly look into whether it was possible to destroy my reputation to blunt my critique of the Iraq War.

So Bush’s denunciations of Putin’s dictatorship as the reason he could single-handedly pursue a ruinous war ring a little hollow.

For a younger generation who didn’t live through it, I should explain that Bush was famous for his gaffes and malapropisms. The problem with the American economy, he once remarked, was that too many of our imports come from abroad. Or there was that time he stridently insisted on the abolition of all terriers. By which he meant, “tariff barriers.” It wasn’t very amusing.

I don’t know how to take Bush’s subvocalization after his gaffe of “Iraq, too.” Does it indicate that he finally moved away from his proud declaration that history would judge his Iraq War and his hope that it would ultimately be vindicated? Because let’s just say that as a professional historian of Iraq, I’m a little closer to that judgment than he is, and it is my estimation that the Bush invasion and occupation of Iraq will always be seen by most historians as one of the largest foreign policy disasters in American history and as the worst disaster to befall Iraq since the Buddhist Mongols took Baghdad and executed the Abbasid caliph in 1258. Millions of Ukrainians have been made refugees. But the Bush invasion and occupation set in train events that displaced 4 million Iraqis. And Iraq at that time only had a population of 26 million, while Ukraine has 44 million. Most Americans, and many even in the State Department don’t know that we did that to the Iraqis.

I’m intrigued that Bush himself may have some remorse for his actions. If so, he should forthrightly come out and say so. Who knows, maybe it will take some of the wind out of the K-Street War Lobby, which learned no lessons from Bush’s Himalayan error.

I’m an eclectic thinker and wouldn’t subscribe to a Realist orthodoxy in political science. But I have to say that I am persuaded by the argument of John Mearsheimer and Stephen Walt that a Great Power only weakens itself by launching wars of aggression against small ramshackle countries like Iraq. They think a Great Power like the US should be focused like a laser on peer powers (e.g. Russia and China) and working out ways to avoid war with them and yet at the same time to preserve American power. When all is said and done, the Iraq and Afghanistan Wars will have cost the US trillions of dollars it literally did not have. Most of that money was borrowed, taking the national debt to dangerous levels for the stability of the dollar. And what economic or geopolitical benefit accrued to Americans from those wars?

If the US had been focused on diplomacy with Russia rather than distracted in the Middle East quagmire for two decades, maybe the current morass in Ukraine, where the Washington eagle is risking nuclear war with a potentially wounded Russian bear, could have been avoided or its most dangerous edges softened.

By the way, Vladimir Putin constantly invokes the Bush invasion of Iraq as proof of American hypocrisy and bad faith when Washington criticizes his own “special operation” in Ukraine.