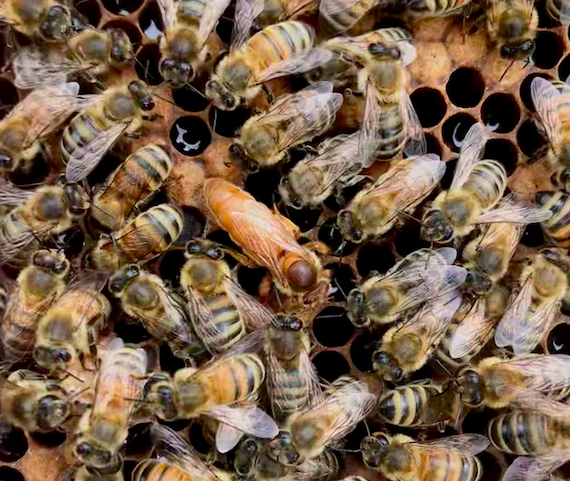 Temperatures soared above 42 C for days in Western Canada in June 2021, with Lytton, B.C., registering 49.6 C, the hottest temperature ever recorded in Canada. Wildfires scorched the province, sparking a 56-day state of emergency and nearly 600 additional sudden deaths compared to the same time in 2020.

But humans were not the only ones affected by the heat. Beekeepers in the Okanagan Valley reported unusual deaths of honeybee queens, drones and small colonies. Drones, which are the reproductive males, spontaneously ejaculate when they die from stress, and Emily Huxter, a beekeeper in Armstrong, saw dozens of drones suddenly lying dead on the lids of her hives with their male bits poking out.

I research how heat stress affects honeybees, and Huxter’s observations reflect what I’ve seen in the lab. Our experiments show that after six hours at 42 C, 50 per cent of male honeybees die. The results were alarming, yet conservative compared to previous work. Other researchers have found that up to 77 per cent of drones die from exposure to 42 C for just four hours.

This means that after a heat wave, new queens — the reproductive females — will have fewer opportunities to mate. Colonies headed by poorly mated queens are more likely to collapse, and this could pose problems for farmers who rely on honeybees to pollinate their crops. But it also betrays the risk that heat waves pose to populations of wild insects.

Death isn’t the only damage

Worryingly, male fertility likely begins to decline well before the drones die. For example, after just two hours at 42 C, about one-third of sperm cells within drone ejaculates perish. This means that if a male bee survives a heat event, his fertility is likely impaired. Huxter’s dead drones indicate that the temperatures last summer clearly reached the fertility-damaging range, even for those that survived.

Queen honeybees mate and keep sperm in a specialized storage organ over their lifetime, typically one to three years. But even stored sperm cells are not safe from hot temperatures. Queens exposed to temperatures above 38 C for two hours or more usually survive, but the viability of the stored sperm drops to what beekeepers consider to be “poor quality.”

Large, established colonies appeared to fare well during the 2021 heat dome, in terms of survival. But just because most bees survived, this insidious loss of fertility for both drones and queens means that they could still have been harmed.

Honeybees are not the only insects whose fertility is impacted by extreme heat. Scientists expect that worsening heat waves could impair fertility of beetles, bumblebees, flies, moths and wasps — and those are just some of the ones we know about.

For whole populations, the trends are even more concerning. In the flour beetle, Tribolium castaneum, the sons of heat-stressed fathers can have impaired fertility, despite never having experienced the heat themselves. Scientists predict widespread wild bumblebee declines as the frequency of heat events increase to “untenable” extremes. And the temperatures at which male fruit flies lose their fertility do a better job of explaining their geographic distributions than the hottest temperatures at which they can survive do.

But honeybees can adapt to their environment, and with the help of beekeepers, they will probably adapt to hotter temperatures too. Subspecies from the Middle East have a higher tolerance to hot and arid conditions than those native to Europe, for example, whereas colonies propagated in Canada show evidence of selection for cold tolerance.

Even so, honeybee colonies only produce new queens about once a year when they prepare to swarm, or produce a new colony. This means that, relative to quickly reproducing insects like mosquitoes, they are by this metric disadvantaged for adapting to rapidly changing conditions.

Luckily, queen honeybees can compensate for this disadvantage by mating with multiple males, assuming they have not been killed in a recent heat wave. This increases the genetic diversity of their colonies, which is the fodder on which natural selection acts.

Canadian beekeepers also import around 250,000 queens each year, adding a constant flow of new genetics. These days, the queens mainly arrive from California and Hawaii, but other exporters include Chile, Australia, Ukraine and New Zealand, among others. This may be a benefit or a hindrance, depending on how genetic diversity balances with local adaptation, but it does promote new combinations of genes that could help deal with new challenges.

Bees are the bellwethers

Despite the losses noted by beekeepers, honeybees, as a species, will almost certainly persist as the climate changes. But not all insects will be so lucky. Bumblebee, wasp and many ant queens, which are also produced annually during the summer, generally mate with one or a few males, with limited opportunities for gene flow, and may be less capable of adapting.

Heat waves are clearly not the only challenge insects face: Habitat loss, pesticides and pathogens are also important. And two months after British Columbia lifted the state of emergency, a devastating flood displaced families yet again, as well as untold numbers of native bees hibernating in the ground.

Insects are critical players in ecosystems around the world, and with many terrestrial species already declining, research on how climate change will impact their fertility is vital. We pay attention to honeybees because we rely on them for pollinating crops, but they are not the only ones on which we depend. We know that the conditions during the 2021 heat dome are sufficient to reduce fertility of honeybees, which should raise alarm bells about the wild insects who don’t have keepers.