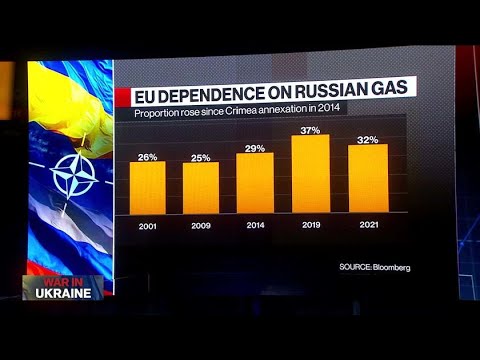 Ann Arbor (Informed Comment) – The breaking news is that the German Minister of Economy and Climate Robert Habeck, who is also the Vice-Chancellor has just announced that Germany is all in on a European Union plan to boycott Russian petroleum. Germany has already reduced its imports from Russia from 35% to 12% in only two months, and Habeck believes he can take that percentage to zero “in a matter of days” according to Chris King at EuroWeekly.

King underlines that Habeck has lined up new sources of petroleum from Norway, Qatar and the United Arab Emirates. Qatar is mainly a gas exporter, but does export something over 500,000 barrels a day of oil. My guess is that the UAE is the big player in upping exports of petroleum to Germany. Although Abu Dhabi says it cannot ramp up production to help Europe because of quotas agreed on by the Organization of Petroleum Exporting Countries, OPEC members have been known to pump above their quotas. In fact, OPEC members would not even suffer from a fall in oil prices if they pumped more to help Europe take Russian oil off the market, since Russia’s own export volume would fall dramatically, reducing supply from that side.

Germany will also have to decide how to dispose of the Rosneft, Russian-owned refinery at Schwedt in Brandenburg.

I would add here that German consumers are stampeding toward electric vehicles because of high gasoline prices and government subsidies. Sören Amelang at Clean Energy Wire also reported in April that “The share of newly registered battery electric, hybrid, fuel cell, gas and hydrogen cars rose to 44.5 percent in the first quarter, an increase of more than 18 percent compared to the same period last year.” Over time, that switch to non-ICE (internal combustion engine) vehicles will also help Germany avoid Russian oil. As will increased use of electrified public transport.

King notes that among 27 EU states, only six are not in a position to switch from Russian oil quickly: Hungary, Austria, Slovakia, Spain, Italy, and Greece. Brussels will probably as a result set a long deadline for the goal, of late next fall. But the likelihood is that all but Slovakia and Hungary, the governments of which are philosophically opposed to boycotting Russia, will find a way to get off Russian oil more quickly than that. Hungary and Slovakia anyway can hardly keep the Russian economy afloat.

It is harder to cut dependence on Russian methane gas than to cut petroleum, but that sector is much smaller than petroleum imports from Russia.

Phil Rosen at the Business Insider raises the question of whether a European Union ban on Russian petroleum imports could crash the Russian economy.

The 2.5 million barrels a day Moscow sends to the EU account for 11% of the Russian gross domestic product. The loss of this sector would come on top of a predicted 10% fall in the GDP already slated owing to US and European boycotts of and sanctions on the Russian economy. So that would be a 21% fall in GDP. It is typically estimated that during the Great Depression of the 1930s, the US economy contracted 25%. So Russia would be in Great Depression territory.

Rosen’s sources make the further point that Russia lacks storage facilities for its petroleum and therefore likely would just have to keep it in the ground.

I would pile on here and point out that when oil rigs and pipelines cease being operated, they can quickly deteriorate and it can cost big bucks to get them back online. There can also be leaks and spills, leading both to economic losses and environmental degradation. Iraq suffered from these sorts of problems in the 1990s and 2000s.

Of course, Russia could try to penetrate other markets. But Rosen shows that it is unlikely that, e.g., India and China could take anywhere near 2.5 million barrels a day off Vladimir Putin’s hands. They have long-term supply contracts with Middle Eastern producers, and China’s COVID-19 outbreak is causing it to cut down on imports anyway. India might be able to take 600k barrels a day of new imports from Russia, but at a steep discount.

Russia could end up paying an extremely high economic price, of a full-blown Great Depression, for its aggressive war on Ukraine.