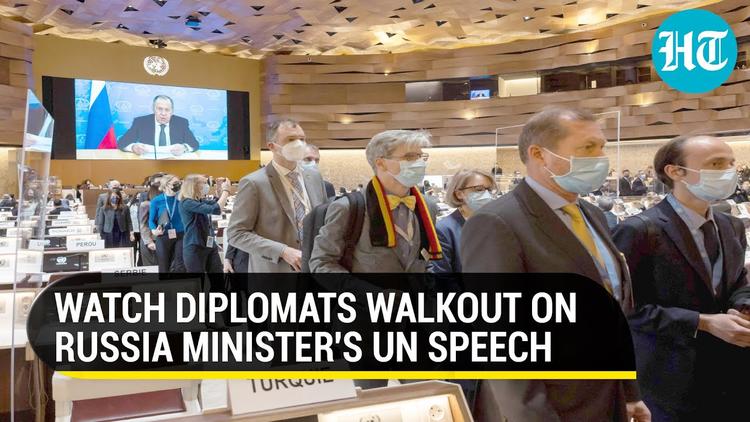 Since the Russian invasion of Ukraine two months ago, the world has grown used to the sight of the Ukrainian president, Volodymyr Zelensky. Zelensky’s diplomatic initiatives, initially from hiding in the besieged capital, Kyiv, and more recently in open meetings with a range of world leaders, have made him one of the most recognisable faces in this war.

Appearing via video link in his trademark camouflage green, Zelensky has addressed various national legislatures, including both houses of parliament in the UK and a joint session of congress in the US. In early March he was featured as the cover story in Time magazine.

But what about Russia? This whole episode can be seen as a failure of Russian diplomacy with Ukraine which stretches back nearly two decades, and has been matched with a similarly catastrophic cooling of relations with the west.

This has its roots in the EU’s expansion into what Russia had previously seen as its zone of influence, beginning in May 2004 when the EU welcomed ten new members, including the Czech Republic, Estonia, Hungary, Latvia, Lithuania, Poland, Slovakia and Slovenia. This meant that Ukraine was now a direct neighbour of the EU. The enlargement required EU integration policies with Ukraine and numerous other former Soviet non-accession countries. Accordingly the Eastern Partnership (EaP) was launched in 2009, aiming at deeper EU integration with Armenia, Azerbaijan, Belarus, Georgia, Moldova and Ukraine.

Putin, meanwhile, was working hard to maintain close relations with Ukraine, particularly with pro-Russian president Victor Yanukovich, whose campaign he had supported in the 2004 election. One of the reasons for his interest in maintaining ties with Ukraine was his ambition to establish the Single Economic Space (SES) a free-trade zone including Russia, Belarus, Ukraine and Kazakhstan.

This was disrupted by the election of pro-western candidate Victor Yushchenko as president in 2004. Eventually, in January 2012, Russia, Belarus and Kazakhstan signed an agreement on the SES, which led to the launch of the Eurasian Economic Union in 2015.

Meanwhile, in late 2013, Yanukovich considered taking Ukraine into a closer political and economic relationship with the EU via an Association Agreement (AA). But three weeks before the agreement was due to be signed at the EaP summit in Vilnius, Lithuania, Putin offered the Ukrainian government both a loan of US$15 billion (£12 billion) and a one-third reduction in the price of Russian gas. As a result, Yanukovich decided not to sign the AA.

This was one of the key reasons for the EuroMaidan protests of 2014. These led to Ukraine’s “revolution of dignity”, which ousted Yanukovich and led to the election of Petro Poroshenko, a pro-European businessman.

As we know, Putin reacted badly to this development and, in March 2014 Russia annexed Crimea, holding a referendum in which a clear majority of people were reported to have voted for secession from Ukraine. The European Council responded with sanctions, including visa bans and asset freezes against individuals who allegedly undermined Ukraine’s territorial integrity and sovereignty. The planned EU-Russia summit in July 2014 was cancelled, as were bilateral meetings between heads of government of EU member states and Russia.

By and large, Russia belittled these sanctions. The chairman of the Council for Foreign and Defence Policy, Fyodor Lukyanov, wrote that:

The west can put economic pressure on Russia, but no one – especially in Europe – is ready to consider truly serious sanctions, because they would cut both ways in this globalised world.

The sanctions’ lack of teeth and what appeared to be an unwillingness or inability to stop continuing Russian aggression in eastern Ukraine was a failure of coercive diplomacy, defined by Danish academic, Peter Viggo Jakobsen, as: “military threats and limited use of force (sticks) with inducements and assurances (carrots) in order to influence an adversary to visibly change its behaviour and do something against its will”. The sticks were not heavy enough and the carrots – from the Kremlin’s point of view at least – were non-existent.

Any attempt at western negotiations with Ukraine has ignored the stark reality that Russia sees any warming of relations between the west and its former allies in eastern Europe as – in the words of the first deputy chairman of the Russian State Duma Committee on International Affairs, Leonid Slutsky: “a tactic of overt amputation of post-Soviet countries from the Eurasian project”.

From what Putin and his foreign minister, Sergei Lavrov, have said in the run-up to, and since, February 24, when Russian troops crossed into Ukraine, it is this fear and resentment of an isolated Russia surrounded by pro-EU and Nato countries, that has led to the current conflict.

In contrast to Zelensky’s much feted diplomacy, Russia’s attempts to represent its cause to the wider international community appear to have been far less successful. More than 100 diplomats walked out of a speech by Lavrov at a United Nations disarmament conference in Geneva in March. Lavrov had reportedly intended to deliver the speech in person, but had been prevented from travelling to Geneva by European countries’ bans on flights from Russia

Against a backdrop of abortive talks between various levels of representation of both Russia and Ukraine – initially in Belarus, then in Ankara in Turkey – Lavrov has continued to press Russia’s case.

He was welcomed to China at the end of March, where he held bilateral meetings not only with foreign affairs spokesman Wang Wenbin, but also with the foreign ministers of Pakistan, Iran and Indonesia, as well as Uzbekistan’s deputy prime minister. The beginning of April found Russia’s top diplomat in India, which has abstained from successive UN resolutions censuring Moscow and has increased its oil purchases from Russia, its biggest supplier of arms.

More recently the UN secretary-general, António Guterres, travelled to Moscow on April 26 and held separate meetings with both Lavrov and Putin, which reportedly resolved little. Putin is reported to have received Guterres at his famous long table, where other world leaders have found in recent months they get short shrift from the Russian leader.

The following day Lavrov met his Eritrean counterpart, Osman Saleh, in Moscow. Eritrea was the only African country to vote against the UN resolution condemning the invasion. In this refusal to condemn Russia, Eritrea was joined by only Belarus, North Korea and Syria. Even longstanding allies such as Cuba and China abstained. It’s an indication of Russia’s increasingly limited diplomatic options as this war continues.