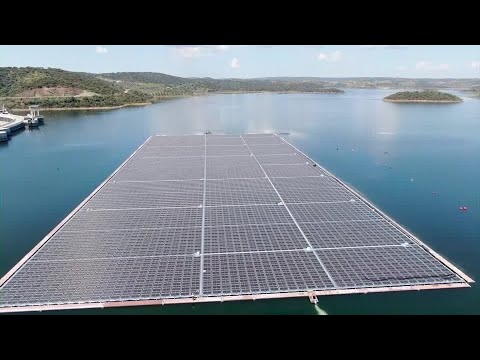 Ann Arbor (Informed Comment) – Europe’s high methane gas prices caused in part by the Russian war on Ukraine are hurting consumers even in countries like Portugal, which don’t import gas from Russia. Shortages are putting the price up for everyone. Portugal has made enormous strides toward greening its electricity grid in recent years.

Wind now generates 26% of Portugal’s electricity consumption, and another 23% is provided by hydroelectric facilities. The country’s last coal plant closed late last year, but it still uses methane gas for 29% of its electricity production.

Portugal’s main utility company, EDP, is trying to expand solar, which only provides 3.5% of the country’s electricity needs. Solar panels are bulky and take up land needed for other purposes. So EDP put 12,000 panels on the huge Alqueva Reservoir, according to Sergio Goncalves and Miguel Pereira at Reuters, and will begin generating electricity for 1,500 local homes imminently. Alqueva is already used to generate hydroelectricity.

EDP says that the cost of the electricity produced by the floating solar array is one-third that of a gas-fired power plant.

So this arrangement has many advantages. For one, the electricity generated by the panels can easily be plugged into the grid through the same nodes used by the hydroelectric facility. Further, solar panels’ efficiency can be reduced when they get really hot. Being on the water cools them and keeps them producing electricity at a high level. A reservoir like Alqueda typically is the sort of place where it is easy to put in pumped hyrdro. The new solar facility will push water uphill during the day to be stored and then released at night. It will also be complemented by 2 gigawatts of lithium-ion battery storage, another way of releasing power to the grid when the sun is not shining. There is a further benefit, which is that the solar panels over the water cut down on evaporation, a real threat with increasing temperatures. This last consideration means that in India and California panels are already being put over irrigation canals, for instance.

EDP will expand the facility to 70 megawatts of installed capacity.

That is still small compared the the 122,000- panel floatovoltaic farm on the Tengeh Reservoir in Singapore, perhaps the largest inland such facility in the world, generating 60 megawatts of electricity that power its five water treatment plants. Singapore, an island city-state, plans more such floating solar farms, including on the ocean surrounding it.

Pakistan is putting a 300 megawatt floating solar panel over the reservoir created by the Tarbela dam.

The Rewa solar company in India is putting a 600 megawatt solar farm on the Omkareshwar reservoir in Madhya Pradesh.

Shandong Province in China south of Beijing is planning 10 offshore solar plants in the shallow waters near the coast.

I think we can see a trend skyrocketing.