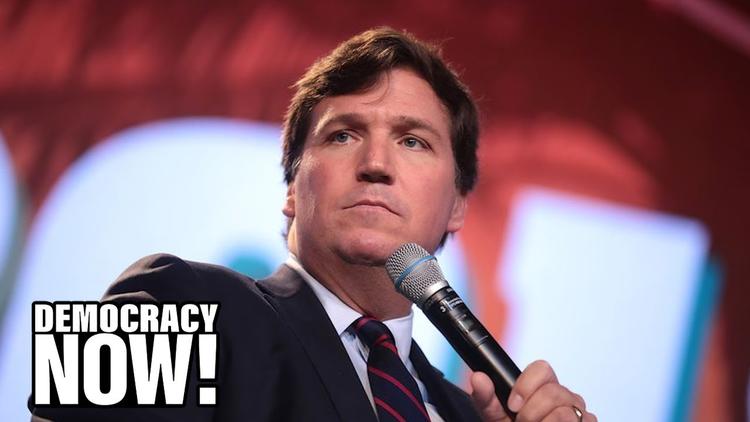 Chicago (Special to Informed Comment) – “All race politics is bad, all race politics is poison — it erases people, it dehumanizes them. Race politics always makes us hate each other. Race politics always leads to violence and death,” said Fox News’ white supremacist Tucker Carlson on his first broadcast after the Buffalo massacre. It sounded like he was blaming himself as well as members of the white nationalist Republican party for their inflammatory racist ideology that helped inspire the Buffalo terrorist, who murdered ten Black people last Saturday, using a semi-automatic assault rifle with the N-word emblazoned on its front sight.

The shooter’s hate-filled manifesto denounced immigrants and Black people as “replacers” of white people just as Carlson did. In April last year, Carlson said “The Democratic Party is trying to replace the current electorate, the voters now casting ballots, with new people, more obedient voters from the Third World.”

Both he and the racist shooter hate diversity. In 2018, Carlson blamed ethnic diversity for “radically and permanently changing our country” and questioned its value: “I don’t see that diversity is the strength of our country — why don’t you explain it to me?” In his manifesto, which does not mention Carlson by name, the Buffalo terrorist echoed Carlson’s viewpoint: “Diversity is not a strength. Why is diversity said to be our greatest strength? Does anyone even ask why? No one can give an answer.”

Carlson helped popularize the far-right ideology that coincided seamlessly with the rhetoric of Republican Party members who also describe immigrants seeking asylum as an invasion or infestation. On America’s most-watched cable news show, Carlson warned viewers that Democrats want “demographic replacement” through a “flood of illegals” in order to increase their voter base.

Is it possible that Carlson read the terrorist’s screed and saw the same Fox/Republican race-baiting nonsense about white replacement that he has been pushing for a year? Maybe he thought to himself: “I have the same ideology as a mass murderer, maybe I should re-think my position.” As a good Episcopalian Christian, possibly Carlson had a Saint Paul-on-the-Road-to-Damascus-type of spiritual and intellectual awakening?

Well, no, he made a dark turn and took a non-saintly road. More MAGA than Christian, Carlson — despite hosting “the most racist show in the history of cable news,” according to reporter Nick Confessore — claimed he was the victim of race politics, not its purveyor. Carlson’s condemnation of race politics was aimed at those denouncing him for his promotion of the vile “Replacement Conspiracy Theory.” He said that the mass shooting resulted from mental illness, not the same racist ideology that he preaches. In this way, he dismissed the racist pronouncements of the Buffalo shooter as the product of a “diseased mind,” yet through some mental gyrations he views his racist declarations as the product of a rational mind. Rational or not, violence inevitably erupts out of Carlson’s white supremacist ideology.

The Carlson creed that motivated the mass murder in Buffalo — “White Replacement Theory” — has a lengthy and blood-soaked history. Since 2011, it has been the explicit motivation for over 160 murders, including Norway’s Anders Breivik’s slaughter of 77 people, mostly immigrants, in 2011; Dylan Roof’s mass murder of Black churchgoers in Charleston, South Carolina, in 2015; the Tree of Life Synagogue killings in Pittsburgh in 2018; the massacre of 51 Muslims in shootings at two mosques in Christchurch, New Zealand, in 2019; and the murder of 23 people, mostly Latino immigrants, in El Paso, Texas, in 2019. Most come with a manifesto that “justify” the killings as a defense against “white genocide” — protecting white people from being replaced by non-whites.

This is not about passive demographic change. These racist fanatics promote the preposterous notion of an apocalyptic threat — a frightening future of decline, degradation and chaos — perpetrated by a cabal of mostly Jewish elites to eradicate the white race. Linked by almost identical ideological manifestos, these white power gunmen are part of a global terrorist movement that share an ideology — an old, dangerous, and idiotic ideology that white people are endangered and about to be made extinct.

Racist mass atrocities like these do not occur in a vacuum. The Buffalo massacre is not only facilitated by Republican resistance to gun control that put a semi-automatic weapon of war in the hands of a teenager, but was enabledby a normalization and mainstreaming of their white supremacist ideology by the former Racist-in-Chief, by Fox News, and by the Republican Party. They created a miasma of hate and intolerance that promotes violence. Like the terrorists themselves, they are not only adherents of the ideology, but evangelists for it as well.

The Muslim-hating Christchurch assassin hailed Trump as “a symbol of renewed white identity and common purpose.” Saturday’s Buffalo killing spree was a disgusting symptom of the white-power President’s viral contamination. His open stoking of racial animus and xenophobia unshackled Fox News and the Republican party to openly spew its racist viewpoint.

”Far-right ideologies, such as the Replacement myth, are normalized through mainstream political discourse by framing immigration as an existential threat,” wrote Cynthia Miller-Idriss, author of Hate in the Homeland. “In recent years this conspiracy theory has made its way from the far-right fringes into the mainstream spotlight, helped both by political speeches and media commentators.”

Tucker Carlson and Fox News played a key role in tweaking the “the white replacement” myth — swapping out Jews for Democrats. Carlson lied to his audience, telling them that Democrats want “demographic replacements” from the non-white world. This has the advantage of not sounding anti-Semitic while making the Republican’s political opponents responsible for eradicating white people. Fox’s Laura Ingraham warned viewers that “the Democrats want to replace many of you,” suggesting there is an “invasion of the country.” Fox’s Jeanine Pirro said that Democrats were involved in “a plot to remake America – to replace American citizens with illegals who will vote for the Democrats.”

Following Fox News’ racism, ambitious Republican lawmakers use the same inflammatory and contemptible rhetoric, reiterating their embrace of the “great replacement” conspiracy theory, once relegated to far-right lunatics. Third-ranking House member Elise Stefanik ran a series of Facebook ads that explicitly used “great replacement” rhetoric: “Radical Democrats are planning their most aggressive move yet: a plan to grant amnesty to 11 million illegal immigrants that will overthrow our current electorate and create a permanent liberal majority in Washington.” But she’s far from alone.

One of the nation’s dumbest senators and an anti-Vax proponent, Wisconsin’s Ron Johnson falsely said, “This administration wants complete open borders. They want to remake the demographics of America to ensure that they stay in power forever.” Johnson may soon have more like-minded colleagues in the Senate who believe that Democrats’ are planning an insurrection to import enough non-white voters to take over control of the electorate for good. At least a half-dozen Republican Senate candidates have voiced similar sentiments on the campaign trail in recent weeks, a sign of how mainstream and deeply ingrained, in Republican orthodoxy, this conspiracy theory has become.

Ohio GOP Senate hypocrite nominee J.D. Vance — a former moderate now sporting MAGA gear — charged, on multiple occasions, that President Biden wanted to end Title 42, which automatically sends asylum-seeking immigrants who cross the border back to Mexico, because Democrats see them as guaranteed future votes. At a late-April town hall, Vance claimed that lifting Title 42 would mean 250,000 immigrants entering the U.S. every month, allowing Democrats to import 10 million to 15 million future voters, 70 percent of whom he claimed, without evidence, would vote Democratic. “This shift in the democratic makeup of this country that would mean we [Republicans] never win.” Supported by the former Liar-in-Chief, Vance also got a big early boost in his race from billionaire PayPal founder Peter Thiel, who gave $10 million to his super PAC.

Thiel’s other major campaign investment was to his former employee and protégée Blake Masters, who’s running for Senate in Arizona. Masters has floated similar rhetoric for months. “The Democrats want to change the demographics of this country,” Masters said on a podcast in late April. “They think that if they can bring in millions and millions and millions of illegal aliens, someday they’ll be able to grant them amnesty, grant them citizenship, and make them reliable Democrat voters.”

Even when mainstream politicians do not actively circulate conspiracy theories, they help validate them by failing to denounce them.“Silence is complicity,” said President Biden in Buffalo this week. Republican conservative Liz Cheney agreed: “The House GOP leadership has enabled white nationalism, white supremacy, and anti-Semitism. History has taught us that what begins with words ends in far worse. GOP leaders must renounce and reject these views and those who hold them.” But they won’t. The mainstreaming of replacement theory will promote racism and xenophobia and help mobilize individuals to violence because it fosters an apocalyptic sense of crisis and emergency.

In moving away from terms like “white genocide” and “Jewish cabal,” Republicans have repackaged the replacement conspiracy as one driven by political partisanship. By ignoring the violent and anti-Semitic underpinnings of these extremist beliefs, Republicans expose more people to their racist ideology, potentially radicalizing them. Simultaneously, Republican attacks on ”critical race theory” try to stifle, in schools, any discussion of the history of racism and xenophobia, protecting white people from feeling bad.

“Mainstreaming is critical to the growth of far-right movements globally, wrote Miller-Idriss in Hate in the Homeland, “because it helps them recruit, radicalize, and mobilize individuals toward violence, while reducing the likelihood that the public will raise the alarm about their efforts.” At the same time, normalizing extreme racist and xenophobic ideas by smuggling them into apparently mainstream Republican campaigns helps the far right achieve political goals related to border closures, restrictions on immigration, and deportations.

The normalization of white supremacist ideas has become more widely accepted by the general public. An Associated Press-NORC poll showed that fully one-third of Americans, and almost half of Republicans, believe that “there is a group of people in this country who are trying to replace native-born Americans with immigrants who agree with their political view.” What were once written off as deranged conspiracy theories and doomsday cult fantasies about white extinction are gaining traction as mainstream beliefs. Racist replacement rhetoric that purports to protect white people from annihilation is another Republican weapon, another attempt to “justify” extreme, anti-democratic, and even violent means to re-gain power in 2022 and 2024.