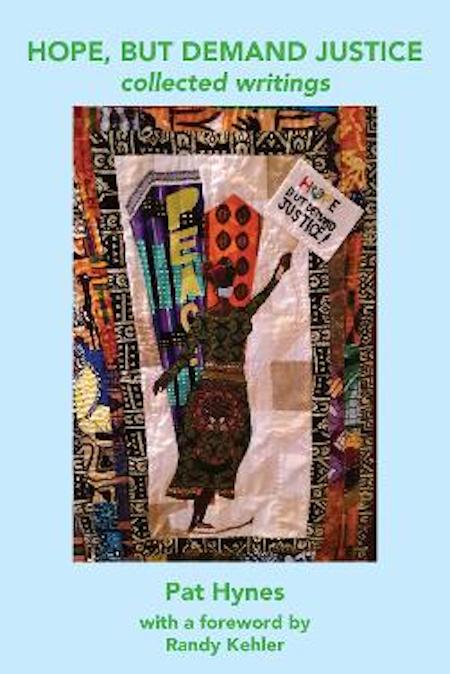 (Special to Informed Comment) – The basic conclusion that I came to after reading Pat Hynes’ “Hope, But Demand Justice” is this: If we humans are to survive, women must achieve decisive roles in governments, on an emergency basis, supported by an international union of women.

This argument is not explicitly made in “Hope”. Indeed, I don’t know if Pat Hynes, the author, intended to make this point, or in this way. But I could not help but to come to this understanding as I read “Hope”’s compilation of Pat’s columns and essays in which she examines our deepest existential challenges.

In writing about our environment, climate emergency, gross economic inequity, refugees, COVID and war, she continually refers to ways in which the plight of women, and children, are systematically ignored and how women are exploited, often viciously and without fear of consequence, particularly when it comes to war.

In “Ten Reasons Why Militarism is Bad for Women”, Pat reports: “By the 1990s, nine of 10 people who died in war from direct and indirect effects were civilians.” Due tp the increasing use of aerial bombing to reduce direct combat among troops, Hynes reports a rise in the proportion of civilian deaths-and notably women and children. And, she reports that 80 percent of the world’s refugees and internally displaced people are women and children.

In this essay, she also points out that “A unique harm of war for women is the trauma inflicted when men wield women’s bodies as weapons to demean, assault and torture.” The rape of women has been an historic feature of war she continues, and then she observes that the project of conducting war, overseen by men, has been dependent on the sexual violation of women through officially sanctioned, and sometimes officially organized, prostitution:

“Governments on all sides of war have initiated, accommodated and tolerated military brothels under the aegis of ‘rest and recreation’ for their soldiers with the private admission that a regulated system of brothels will contain male sexual aggression, limit sexually transmitted diseases in the military and boost soldier’s morale for war.”

A question that immediately arises is: How long would wars last without rape and other sexual exploitation of women? The withholding of sex by women to stop wars is the premise of Aristophanes’ satirical anti-war comedy “Lysistrata”, first performed in 411 BC.

Another question arises after reading “Hope”: Are not our profoundly inequitable, grossly destructive economic systems, in the United States and globally, based on the exploitation of women, both through violence and intimidation?

Showing us an alternative to the deadly path that humanity is on, Pat reports the following in an essay on her heartening experiences at the International Feminist Peace Conference, held in Ghana in 2018. The conference was organized by Women’s International League for Peace and Freedom, of which Pat is a devoted member:

“Studies of women in leadership in public and private sectors have concluded that women in high-level positions and on boards deal more effectively with risk, focus more strategically on long-term priorities, and are more successful financially. Experimental studies of women and men negotiating post-conflict agreements have found that all-male groups take riskier, less empathetic, and more aggressive positions. They (the negotiations) also break down more quickly than negotiations that include women. Further, men are more satisfied with decisions made with women involved that those made with all-male groups.”

In the essay “War and Militarism: Our Nemesis”, Pat concludes: “We women have almost universally won our rights, tactically and intelligently across history, without using warplanes, drones, soldiers, bombs, or guns.”

“Hope” is only a 215-page book, but Pat has packed critical facts and analysis into each article and essay. I suggest that rather than planning to read straight through the book, you read one column, essay or talk at a sitting, giving yourself a chance to re-read and reflect. I predict that you will be inspired to take some kind of action as a result of what you’ve read.

Action is an almost guaranteed result from spending time with “Hope” because it is infused with Pat’s courage and her enthusiasm for learning, teaching and undertaking work that helps others.

• In 1974, Pat and Gill Gane opened the Bread and Roses restaurant at 134 Hampshire Street, Cambridge, MA, which was also a center for feminist organizing and art. (The spot is now occupied by a restaurant named Oleana and visited on the Mapping Feminist Cambridge historic tours, teaching about the feminist movement in Cambridge from the 1970’s to the 1990’s.)

• In 1980, Pat designed a passive solar house for herself and her partner, Janice Raymond, enabled by her environmental engineering degree from the University of Massachusetts, Amherst. The project led to other such houses being built in Franklin and Hampshire Counties in Massachusetts.

• In the early 2000s, she visited the Philippines and other low-income nations with her partner, who was then director of the Coalition Against Trafficking in Women. On the Philippines trip she met women who had worked in brothels near U.S. military bases and, also, victims of pollution from these bases. This experience led her to create a doctoral seminar on the health effects of war for her students at Boston University School of Public Health, and the trip, she says in “Hope”, “set the course of my path once I retired from BU.”

• Pat traveled from Hanoi to Ho Chi Minh City in Viet Nam in 2014 to investigate the impact on third and fourth generations of Vietnamese whose ancestors had been exposed to the toxic defoliant Agent Orange, used by the U.S. during Viet Nam War. As a result, Traprock Center for Peace and Justice, in Greenfield, MA, raised money for scholarships for Agent Orange victims. Pat also started a project that collected more than $16,000 for tree nurseries and tree-planting in Viet Nam. Pat was director of Traprock from 2010 to 2020, and she is currently a member of its board of directors.

Early in “Hope”, Pat quotes Leonard Cohen in a 2017 column entitled “How the Light Gets In”:

Ring the bells that still can ring,
Forget your perfect offering.
There is a crack in everything.
That’s how the light gets in.

Then, she writes: “In times of climate change denial, macho military chest-beating, stagnant wages and soulless extremes of wealth and poverty, light-bearing cracks are all we have.”

“We create conditions for hope when we aspire to something both good and badly needed and when we work toward achieving it, no matter the odds. And, if enough of humanity joins in this, we can improve the odds of human survival.”

Nick Mottern is Co-coordinator of BanKillerDrones.org and a member of the national board of Veterans for Peace. He has worked as a reporter, researcher, writer and political organizer over the last 30 years. While in the U.S. Navy he was in Viet Nam in 1962-63. He graduated from Columbia University’s Graduate School of Journalism in 1966, and he has worked as a reporter for the Providence (RI) Journal and Evening Bulletin, a researcher and writer for the former US Senate Select Committee on Nutrition and Human Needs, a lobbyist for Bread for the World and a writer and co-organizer of speaking tours in the United States on US involvement in Africa for Maryknoll Fathers and Brothers.