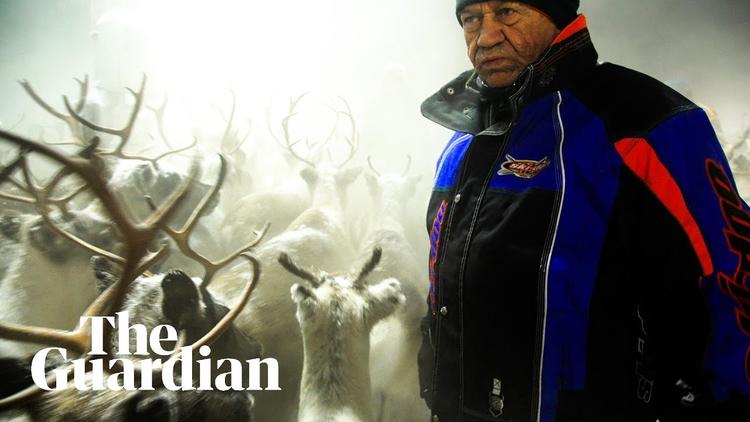 By Jenni Laiti and Florian Carl | –

( Waging Nonviolence) – “What local people?” This was the highly controversial question posed in 2014 by the former head of the British mining company Beowulf — to dismiss concerns over the impacts of a proposed iron-ore mine on the Indigenous Sámi people. The project is set to take place in Gállok, an Arctic region located within Sápmi. This is the name of the ancestral territory of the Sámi, who have lived in reciprocity with all sentient beings dwelling in this part of the world since time immemorial. That is, until this way of living was assaulted through the colonization by Norway, Sweden, Finland and Russia.

As Sweden backs a new iron-ore mine, the impacted Sámi people emphasize the urgent need for real climate solutions.

Almost eight years later, in late March 2022, Sweden’s social-democratic government finally awarded a mining license for Gállok. Despite many efforts to stop the project, the government decided to side with Beowulf, ignoring the wide chorus of criticism by Sámi governing bodies, environmental activists, scientific experts and leading international organizations. Based on Western governments’ current transition plans, this decision could pave the way for ever more erasure of Indigenous livelihoods, destruction of biodiversity and violations of fundamental rights.

In February 2013, the government agency that oversees mining interests — the Swedish Geological Society — designated Gállok as “an area of national interest for minerals.” This decision gave the green light to start exploratory drilling in Gállok. In response, the Sámi and their allies mobilized one of the most significant resistance movements against extraction industries in Sweden to date.

Beowulf‘s planned iron mine would perpetuate previous issues tied to extraction industries in Sápmi, such as the violation of fundamental Indigenous rights, the eradication of the reindeer’s seasonal migration patterns and the degradation of rivers. Moreover, the area is a living entity in its own right, and an open-pit iron-ore mine would endanger the lands’ own rights to exist.

“Today, our reindeer have to live with the negative impacts of ‘renewable’ energy production and large-scale forestry,” said Jan-Erik Länta, whose reindeer herding community would be affected by the mine. “In addition, we also have to work around infrastructures and deficient conservation policies.”

Article continues after bonus IC video
The Guardian: “How climate change is killing an Arctic culture”

According to Länta, Sápmi is already experiencing aggregated effects of a warming climate, which is amplifying their issues even more. “There is no more room for a co-existence between Sámi livelihoods and extractive industries,” he said.

Both private and state-owned companies increasingly claim that their projects in Sápmi are “green” and could help ease the impacts of climate change. For example, Swedish companies like Sveaskog rebranded its tree plantations in the region as “carbon storage facilities.” Meanwhile, LKAB legitimizes its mining operations in Sápmi through decarbonization, and Vattenfall obscures the detrimental environmental impact of their dams by emphasizing that they produce “renewable energy.”

Since its inception, Swedish governments repeatedly refused to take measures that would counteract the systemic violation of the Indigenous inhabitants who live on the lands Sweden claims for itself. For example, they have not ratified international conventions for the protection of Indigenous rights, including the Indigenous and Tribal Peoples Convention Nr. 169 by the International Labour Organization. Quite the contrary, Swedish colonialism is sustained and promoted via a revolving door between the leadership of international corporations, industry lobbyists and high-ranking government officials.

Together, they advocate false climate solutions across economies that stretch well beyond Sápmi. For example, a new deep-sea wire recently set up to transfer wind and water energy extracted from Sápmi to continental Europe has been dubbed “the green link.” Despite the well-established disastrous impacts of wind and water industries on Sámi communities, the Dutch, German and Norwegian companies behind the initiative pride themselves on making “green energy available safely and affordably in the E.U.” This exemplifies the widespread disregard of these actors when it comes to the upstream consequences of their projects, especially for Indigenous communities like the Sámi.

In contrast to common perceptions, colonization is not driven exclusively by settlements, military conquest and corporate expropriation — nor are its impacts limited to far off people and lands. Today, colonization is maintained via neo-colonial institutions. Authorities simply point to seemingly objective legal codes and technocratic administrations to repackage and legitimize their exploitative violence as a necessary evil for the so-called greater good.

To distract from the structural devastation of extractive economies on Indigenous people, colonial states like Sweden often point towards consultations as a mechanism to ensure checks and balances. However, Indigenous communities and researchers regularly report how such processes end up in favor of corporations. In practice, most of these consultations are merely a smoke-screen for colonial exploitation, ignoring key principles like free, prior and informed consent. These principles are protected by international human rights recognizing the right of people to self-determine how they chose to pursue their economic, social and cultural development.

In 2020, for example, the UN Committee on the Elimination of Racial Discrimination evaluated a mine, similar to the one proposed in Gállok, built on the lands of the Vapsten Sámi reindeer herding community. In its report, the committee highlighted how state-sanctioned consultation processes in Sweden create a perception of choice while reducing fundamental rights to mere economic interests. For example, consultations do not allow Sámi communities to reject projects — their inclusion is only meant to “polish the project somewhat from a reindeer herding perspective.” The committee declared these practices as acts of racial discrimination on several accounts.

Beyond attempts at greenwashing, Western states continue to justify colonial practices by rendering the colonized unfit to govern themselves and their lands. This approach invalidates traditional livelihoods and allows for the creation of sacrifice zones, for example, as happened by the flooding of areas in Sápmi during the construction of water dams. Concerns for the climate crisis result in the creation of new sacrifice zones. This green colonialism is facilitated by the expansion of the wind industry in Sápmi, promoted by private investors like German Aquila Capital or international banks like Credit Suisse.

Given the West’s continuous prioritization of economic growth, every stopped project in one sacrifice zone increases pressures in another. This is not a matter of single-issue politics; it is a systemic failure that turns the entire planet into a sacrifice zone. Decisions like a mine in Gállok strengthen the role of short-term economic gains to guide how social progress is evaluated.

While global ecological breakdown disproportionately benefits a small elite, the impacts are imposed on the global majority, largely Black, Indigenous and people of color, especially women and workers. This is exemplified by the fact that high-consumption countries in the global North alone are responsible for 92 percent of emissions in excess of the planetary boundary.

The bottom line is that most current climate solutions promoted by Western governments ransom our collective future by pitting people against one another. In Sápmi, for example, these solutions rely on forest workers, miners, and public servants to carry out fundamental rights violations, forced displacements and extermination of ecosystems.

We must hold actors that promote such unjust and misleading climate solutions accountable. A key aspect of this work is to resist the spread of fraudulent environmentally-friendly language, dismantle racism and nurture narratives to counter the monolith of Western techno-utopias. As Indigenous communities across the world have repeatedly highlighted: the idea of destroying nature to protect her is ill-fated at best and fatal at worst.

The Indigenous Environmental Network recently looked at the impact of Indigenous-led resistance to fossil fuel projects across Turtle Island — the landmass commonly referred to as North America. They found that in the last decade, “Indigenous opposition has stopped or delayed greenhouse gas pollution equivalent to at least one-quarter of annual U.S. and Canadian emissions.”

The historical forces of colonization have tied our fates together. If we are to avert a climate dystopia and create a just, healthy and sustainable future for all, then we must support Indigenous communities’ self-determination, learn with Indigenous knowledge holders, and return stolen lands into the hands of their ancestral custodians.

“Today, the Sámi are required to appeal to colonial governments and their legal frameworks to raise concerns about projects impacting our lands,” said Sanna Vannar, whose reindeer herding community will also be affected by the mining project in Gállok. “But we never gave up our territories. Sámi customary law and land management should have the final say on any initiatives in Sápmi.”

Under present political structures, Sámi are constantly forced to navigate their lives in relation to all kinds of colonial intrusions, from discriminatory policies to hate speech and extractive industries. The movement in Gállok is not simply a reaction to Beowulf’s plans to build an iron ore mine. The effort to protect livelihoods, culture and lands doesn’t stop with Gállok. Theirs is a radical politics of refusal connected to generations of Sámi who have struggled for their people’s legitimate right to self-determination

We have to provide the necessary space to address how current practices by Western governments and complicit companies reproduce structures of oppression and violence. These processes require us to, for example, nurture reciprocal relationships, transition our communities to become caretakers in service of the planet and abolish anthropocentric worldviews.

The climate emergency is a systemic issue. There is no space for green-washed justifications of business as usual. Projects like the mine in Gállok are designed to feed the same capitalist monsters that are responsible for escalating the climate crisis. Together, we have the tools and knowledge to make false climate solutions obsolete, emphasizing our collective creativity, love and imagination.

The Sámi’s traditional ways of living in symbiosis with their lands, through reindeer herding, fishing and hunting, provide the most consistent approach to achieving reciprocal relations between humans and nature in Sápmi today. They teach us that genuine climate solutions require the implementation of just transformations, inserting communal self-determination, restoring the rivers and letting the reindeer roam.

Instead of forcing Sámi to adapt their livelihood and cultural practices to a mine in Gállok, we should support them to develop on their own terms as a free Indigenous people.

This story was produced by Resistance Studies

Jenni Laiti is a Duojár (Master of Traditional Sámi Crafts), Indigenous Rights Activist and Climate Justice Advocate. She is engaged across Sámi civil society, most recently with increased attention on the resistance movement against a planned mining project in Kallak/Gállok in her home village, advocating for climate justice in Sápmi and working with local Sámi communities to strengthen Sámi self-determination and local governance.
Florian Carl

Florian Carl is an Italy based community organizer supporting multi-front anti-colonial struggles, decolonization initiatives, and climate justice. He has long worked alongside frontline communities of the climate crisis, for example, as a project coordinator and campaigner for the People’s Climate Case. Florian has recently been awarded a four-year PhD scholarship at the Centre on Social Movement Studies, writes debate articles, and is passionate about creating electronic music.