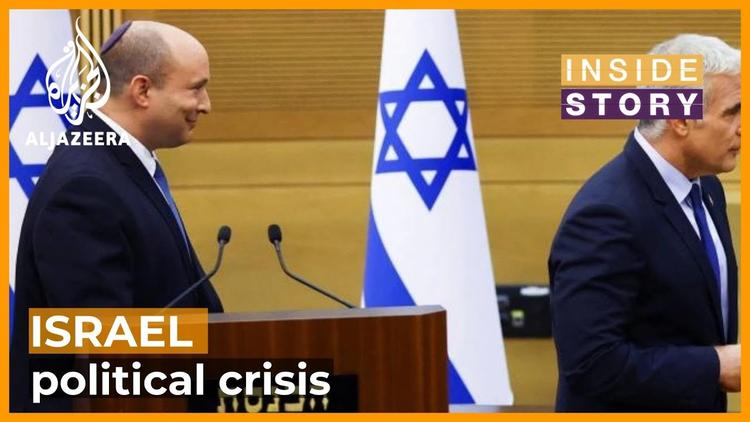 ( Middle East Monitor ) – Israel is in the midst of a political stalemate. Bennett’s centre-right government has resigned and new elections will be held in late October/early November. It does not really matter who wins; certainly in terms of the Palestinian citizens of Israel are the colonised Palestinians of the Occupied Territory. They, like the Left (meaning the Zionist Left, the Labour Party and Meretz, happy partners in Bennett’s government), are irrelevant. The short distance – and major overlaps – between the Netanyahu-loyal Right and the anti-Bibi Centre-Right marks the range of Israeli politics. So the results of the next election will produce nothing more than a variation of the present one, with or without Netanyahu, and certainly no change in policy towards the Occupation, i.e., managing and marginalising it as a political “non-issue.”

One new political reality complicating the possibility of forming a stable government in Israel: given the electoral draw between the Netanyahu/anti-Netanyahu forces, it is becoming impossible to establish a government without an Arab party. In the present government, Ra’am, the Islamic Party representing mainly the Bedouin population of the Negev, is playing that role. As an Islamic Party belonging to the Muslim Brotherhood (as does Hamas, though the two groups are antagonistic towards each other), Ra’am’s agenda is promoting conservative religious values (they oppose LGBTQ rights, for example) and providing badly needed housing and services to the Arab sector.

Because of its religious conservatism, Ra’am would rather sit in a Netanyahu-led government that includes its natural allies, the ultra-orthodox Jewish parties, rather than in a Centre-Right government with secular liberals. Since Ra’am could be the swing vote that determines which right-wing bloc sets up the next government, one would expect Netanyahu to be courting it. But Netanyahu, partly in order to discredit Bennett’s government and bring it down, has only attacked and delegitimised Ra’am, calling it an “anti-Zionist party of Muslim Brotherhood terrorists”. He has vowed Ra’am will never be part of a Likud-led government – although Ra’am itself would be very comfortable with that.

Article continues after bonus IC video
Al Jazeera English: “Will a new vote in Israel make a difference? | Inside Story”

The other three Arab parties of the Joint Arab List would never join a Likud government coalition, but might consider a slightly less right coalition led by Yair Lapid, the present Foreign Minister of the Centre-Right yuppie Yesh Atid party. What all this means is that Netanyahu and the Likud will have to cobble together a government coalition of 61 seats based solely on right-wing Jewish parties, some of whom despise him, without the potential support of Ra’am – not an easy task. (The Likud currently has 30 seats out of the Knesset’s 120, meaning it would have to find another 31 from disparate parties that have 6, 7 or 8 seats each in order to form a government.) A Lapid-led coalition (the successor of Bennett’s, since he will not be re-elected) has the advantage of Ra’am’s support (4 seats) and potentially the Joint Arab List (another 6 seats), but bringing them in risks alienating other right-wing parties that Lapid would need as well – so another difficult juggling act, and not one promises a stable government.

This sets up a cruel political irony. The Zionist Left, whose only hope for some influence will be to join Lapid’s government as they did Bennett’s, even though that means ignoring the Palestinian issue, is putting pressure on Arab voters to turn out in large numbers to “save Israel.” (Netanyahu does the opposite: in past elections he has attempted to scare Israeli Jews to vote Likud because “the Arabs are rushing to the polls in droves”.) Needless to say, the demand that they “save Israel” bemuses – actually pisses off – the “Arabs”. (Indeed, they are called by the generic term “Arabs” because the very Israel they are now called upon to “save”, denies their national identity.) In fact, many, perhaps most, do not vote at all, finding little benefit in it, their support merely being used to prop up governments that actively discriminate against and oppress them. Although Palestinian citizens of Israel account for 21 per cent of the population, the four Arab parties garner less than 10 per cent of the vote.

Bennett’s government tried to stay in power by making a conscious decision to ignore the divisive Palestinian issue completely, to focus solely on domestic matters. But it could not insulate itself from either Palestinian resistance to brutal military suppression in the Occupied Territory or the demands – resisted by their Jewish coalition “partners” – for meaningful investment into the Palestinian community inside Israel. Little was done to alleviate the poverty, high unemployment, lack of infrastructure and poor education of the Arab population, as Ra’am, tried to do. And Bennett’s government even approved the establishment of four Jewish settlement-towns on Bedouin Negev land.

On the contrary, the right-wing and centrist parties, including Bennett’s own Yemina (“Rightward”) party, could not stomach what they considered their own government’s weak response to “Arab terror” – a lack of repression following attacks in Israeli towns (despite the Israeli army’s invasion of the Jenin refugee camp that resulted in the death of the Palestinian journalist, Shireen Abu Akleh; a lack of repression following the Ramadan “disturbances,” despite the invasion by the police of the Al Aqsa Mosque; too much hesitation in approving the fascistic “March of [Israeli] Flags” by violent settlers through the Muslim Quarter of Jerusalem’s Old City; together with internal criticism that settlements were not being constructed fast enough in the West Bank (despite the government’s announcement that more than 4,000 new settlement units had been approved) or that the IDF was being “too tough” in its [ineffective] response to settler violence against Palestinians.

In the end, there is a larger political stalemate. Israel is unable to suppress Palestinian resistance to occupation but is unable to move beyond apartheid, rendering “the conflict” and all the instability it causes a permanent fact of life. It is unwilling to address the basic social and economic needs of its own Arab population, but cannot establish a functioning government without them. It is the worst of all scenarios: endemic instability in Israeli government that only deepens Israel’s inability to deal with the Palestinian issue and its commitment to apartheid internally, as well as in the Occupied Territory. An inability caused largely by the oppression of Palestinians but not enough instability to cause Israel to re-evaluate its policies, certainly not to end its occupation. A settler colonial state hoisted on its own petard, having nowhere to go but into apartheid and repression against its own [Palestinian] citizens, as well as those they rule as colonial overlords. A country desperate for “normality”, pathetically pressing its claim to be “the only democracy in the Middle East”, but trapped in the colonialism of its own making.

It is a golden trap, of course. Israelis can afford to ignore the Palestinians because they have created a European-level economy insulated from the brutality it generates. Government instability for Israeli Jews is merely a side-show of failed politicians. As long as it does not threaten their standard of living and sense of personal security – which it has not – no one cares, in particular. No one will miss the Bennett government. And the next government will be virtually indistinguishable, with or without Ra’am.