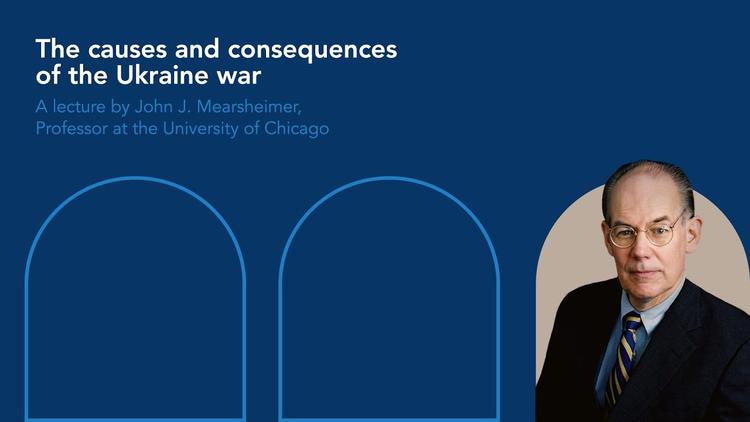 “Professor John J. Mearsheimer will discuss the current Russian invasion on Ukraine whilst exploring the potential causes and consequences of the crisis.

In this lecture, Prof. Mearsheimer will aim to focus on both the origins of the war in Ukraine and some of its most important consequences. He will argue that the crisis is largely the result of the West’s efforts to turn Ukraine into a Western bulwark on Russia’s border. Russian leaders viewed that outcome as an existential threat that had to be thwarted. While Vladimir Putin is certainly responsible for invading Ukraine and for Russia’s conduct in the war, Prof. Mearsheimer states that he does not believe he is an expansionist bent on creating a greater Russia. Regarding the war’s consequences, the greatest danger is that the war will go on for months if not years, and that either NATO will get directly involved in the fighting or nuclear weapons will be used — or both. Furthermore, enormous damage has already been inflicted on Ukraine. A prolonged war is likely to wreak even more devastation on Ukraine.

Prof. John J. Mearsheimer is the R. Wendell Harrison Distinguished Service Professor in the Political Science Department at the University of Chicago.”

Robert Schumann Center for Advanced Studies: The causes and consequences of the Ukraine war A lecture by John J. Mearsheimer

“The Causes and Consequences of the Ukraine Crisis

The war in Ukraine is a multi-dimensional disaster, which is likely to get much worse in the foreseeable future.
by John J. Mearsheimer

Editor’s note: This speech was given at the European Union Institute (EUI) in Florence on Thursday, June 16.

The war in Ukraine is a multi-dimensional disaster, which is likely to get much worse in the foreseeable future. When a war is successful, little attention is paid to its causes, but when the outcome is disastrous, understanding how it happened becomes paramount. People want to know: how did we get into this terrible situation?

I have witnessed this phenomenon twice in my lifetime—first with the Vietnam war and second with the Iraq war. In both cases, Americans wanted to know how their country could have miscalculated so badly. Given that the United States and its NATO allies played a crucial role in the events that led to the Ukraine war—and are now playing a central role in the conduct of that war—it is appropriate to evaluate the West’s responsibility for this calamity.

First, the United States is principally responsible for causing the Ukraine crisis. This is not to deny that Putin started the war and that he is responsible for Russia’s conduct of the war. Nor is it to deny that America’s allies bear some responsibility, but they largely follow Washington’s lead on Ukraine. My central claim is that the United States has pushed forward policies toward Ukraine that Putin and other Russian leaders see as an existential threat, a point they have made repeatedly for many years. Specifically, I am talking about America’s obsession with bringing Ukraine into NATO and making it a Western bulwark on Russia’s border. The Biden administration was unwilling to eliminate that threat through diplomacy and indeed in 2021 recommitted the United States to bringing Ukraine into NATO. Putin responded by invading Ukraine on February 24th of this year.

Second, the Biden administration has reacted to the outbreak of war by doubling down against Russia. Washington and its Western allies are committed to decisively defeating Russia in Ukraine and employing comprehensive sanctions to greatly weaken Russian power. The United States is not seriously interested in finding a diplomatic solution to the war, which means the war is likely to drag on for months if not years. In the process, Ukraine, which has already suffered grievously, is going to experience even greater harm. In essence, the United States is helping lead Ukraine down the primrose path. Furthermore, there is a danger that the war will escalate, as NATO might get dragged into the fighting and nuclear weapons might be used. We are living in perilous times.

Let me now lay out my argument in greater detail, starting with a description of the conventional wisdom about the causes of the Ukraine conflict.

It is widely and firmly believed in the West that Putin is solely responsible for causing the Ukraine crisis and certainly the ongoing war. He is said to have imperial ambitions, which is to say he is bent on conquering Ukraine and other countries as well—all for the purpose of creating a greater Russia that bears some resemblance to the former Soviet Union. In other words, Ukraine is Putin’s first target, but not his last. As one scholar put it, he is “acting on a sinister, long-held goal: to erase Ukraine from the map of the world.” Given Putin’s purported goals, it makes perfect sense for Finland and Sweden to join NATO and for the alliance to increase its force levels in eastern Europe. Imperial Russia, after all, must be contained.

While this narrative is repeated over and over in the mainstream media and by virtually every Western leader, there is no evidence to support it. To the extent that purveyors of the conventional wisdom provide evidence, it has little if any bearing on Putin’s motives for invading Ukraine. For example, some emphasize that he said that Ukraine is an “artificial state“ or not a “real state.” Such opaque comments, however, say nothing about his reason for going to war. The same is true of Putin’s statement that he views Russians and Ukrainians as “one people“ with a common history. Others point out that he called the collapse of the Soviet Union “the greatest geopolitical catastrophe of the century.” Of course, Putin also said, “Whoever does not miss the Soviet Union has no heart. Whoever wants it back has no brain.” Still, others point to a speech in which he declared that “Modern Ukraine was entirely created by Russia or, to be more precise, by Bolshevik, Communist Russia.” But as he went on to say in that very same speech, in reference to Ukraine’s independence today: “Of course, we cannot change past events, but we must at least admit them openly and honestly.”

To make the case that Putin was bent on conquering all of Ukraine and incorporating it into Russia, it is necessary to provide evidence that first, he thought it was a desirable goal, that second, he thought it was a feasible goal, and third, he intended to pursue that goal. There is no evidence in the public record that Putin was contemplating, much less intending to put an end to Ukraine as an independent state and make it part of greater Russia when he sent his troops into Ukraine on February 24th.

In fact, there is significant evidence that Putin recognized Ukraine as an independent country. In his July 12, 2021, article about Russian-Ukrainian relations, which proponents of the conventional wisdom often point to as evidence of his imperial ambitions, he tells the Ukrainian people, “You want to establish a state of your own: you are welcome!” Regarding how Russia should treat Ukraine, he writes, “There is only one answer: with respect.” He concludes that lengthy article with the following words: “And what Ukraine will be—it is up to its citizens to decide.” It is hard to reconcile these statements with the claim that he wants to incorporate Ukraine within a greater Russia.

In that same July 12, 2021, article and again in an important speech he gave on February 21st of this year, Putin emphasized that Russia accepts “the new geopolitical reality that took shape after the dissolution of the USSR.” He reiterated that same point for a third time on February 24th, when he announced that Russia would invade Ukraine. In particular, he declared that “It is not our plan to occupy Ukrainian territory” and made it clear that he respected Ukrainian sovereignty, but only up to a point: “Russia cannot feel safe, develop, and exist while facing a permanent threat from the territory of today’s Ukraine.” In essence, Putin was not interested in making Ukraine a part of Russia; he was interested in making sure it did not become a “springboard“ for Western aggression against Russia, a subject I will say more about shortly.

One might argue that Putin was lying about his motives, that he was attempting to disguise his imperial ambitions. As it turns out, I have written a book about lying in international politics—Why Leaders Lie: The Truth about Lying in International Politics—and it is clear to me that Putin was not lying. For starters, one of my principal findings is that leaders do not lie much to each other; they lie more often to their own publics. Regarding Putin, whatever one thinks of him, he does not have a history of lying to other leaders. Although some assert that he frequently lies and cannot be trusted, there is little evidence of him lying to foreign audiences. Moreover, he has publicly spelled out his thinking about Ukraine on numerous occasions over the past two years and he has consistently emphasized that his principal concern is Ukraine’s relations with the West, especially NATO. He has never once hinted that he wants to make Ukraine part of Russia. If this behavior is all part of a giant deception campaign, it would be without precedent in recorded history.

Perhaps the best indicator that Putin is not bent on conquering and absorbing Ukraine is the military strategy Moscow has employed from the start of the campaign. The Russian military did not attempt to conquer all of Ukraine. That would have required a classic blitzkrieg strategy that aimed at quickly overrunning all of Ukraine with armored forces supported by tactical airpower. That strategy was not feasible, however, because there were only 190,000 soldiers in Russia’s invading army, which is far too small a force to vanquish and occupy Ukraine, which is not only the largest country between the Atlantic Ocean and Russia, but also has a population over 40 million. Unsurprisingly, the Russians pursued a limited aims strategy, which focused on either capturing or threatening Kiev and conquering a large swath of territory in eastern and southern Ukraine. In short, Russia did not have the capability to subdue all of Ukraine, much less conquer other countries in eastern Europe.

As Ramzy Mardini observed, another telling indicator of Putin’s limited aims is that there is no evidence Russia was preparing a puppet government for Ukraine, cultivating pro-Russian leaders in Kyiv, or pursuing any political measures that would make it possible to occupy the entire country and eventually integrate it into Russia.”

To read on, follow this link to The National Interest.