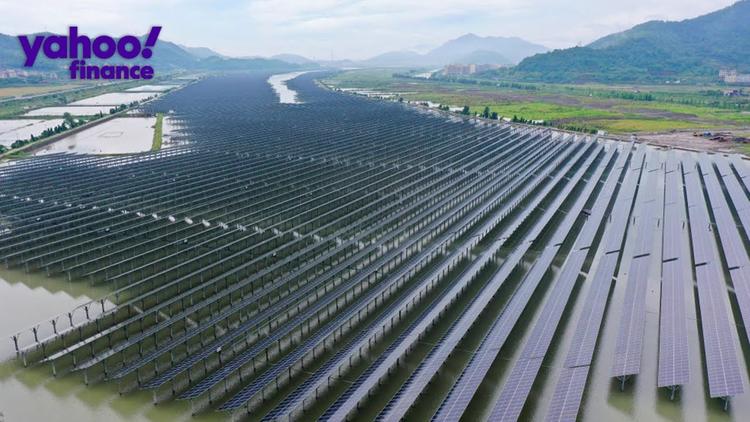 Ann Arbor (Informed Comment) – President Biden just launched a series of executive orders and other measures for solar energy that have the potential to be the biggest energy initiatives by any president since Franklin D. Roosevelt, on whose watch the Hoover Dam and the Tennessee Valley Authority came into being. The Hoover Dam produces 2 gigawatts of power and the TVA produces 34 gigawatts for a grand total of 36 GW. That is very impressive for the 1930s. But the total effect of Biden’s measures at the federal and state level will be the production of 100 gigawatts of new solar energy over the next ten years according to Ryan Kennedy at PV Magazine.. The US only has about 123 gigs of solar capacity now, so Biden just nearly doubled it with the stroke of a pen.

Solar stocks popped on the news.

Biden has cleverly solved a problem that threatened to create a bottleneck for new solar installations this year. About half of them were held up by a Commerce Department investigation of whether China was evading Trump’s tariffs on solar panels by funneling them through Southeast Asian countries. Most solar farms in the US depend on imported panels, and imports of new panels from Cambodia, Thailand, Malaysia and Vietnam had been halted by Secretary of Commerce Gina Raimondo (a former governor of Rhode Island and a venture capitalist). Some 75% of panels imported by the US came from those four countries and the halt on imports threatened 50% of new solar installations planned this year.

Biden did not want to interfere with a Commerce investigation. So he hit on the solution of allowing imports of panels and components from the four countries to continue duty-free for the next two years while the investigation proceeds, but at the same time to goose US domestic solar panel production so that by the time the two years are up we might be able to cover any foreign shortfall with our own made-in-the-USA panels. This move repositions the US as a potential global player in the solar panel market, which could be a crucial step toward reindustrialization. Biden is being careful, as well, to build in requirements for use of union workers at American panel factories.

In other words, there are genuine elements of a Green New Deal in these executive orders.

In waiving restrictions on these imported panels, Biden cited national security concerns. He pointed out that the US faces an energy crisis both because of the Russian war on Ukraine and because of extreme weather events driven by climate change. Obviously a robust US electrical grid is crucial to our national security. All of the 450 to 500 military bases inside the country depend on electricity for their functioning, for instance. Agencies such as the CIA and the National Security Agency also need electricity to do their work. Without electricity the parts of the US government involved in the provision of security would be blind, deaf and dumb.

Biden said of the climate emergency’s impact, “For example, in parts of the country, drought conditions coupled with heatwaves are simultaneously causing projected electricity supply shortfalls and record electricity demand. As a result, the Federal Energy Regulatory Commission and the North American Electric Reliability Corporation have both warned of near-term electricity reliability concerns in their recent summer reliability assessments.”

This reasoning strikes me as absolutely delicious. Biden has to turbocharge solar energy to meet national security concerns about the US electrical grid that are being caused in part by the prevalence of fossil fuel electricity generation and the extreme weather it produces.

It is almost Hegelian reasoning. The hydrocarbon fuels are creating the conditions of their own destruction, requiring a new means of green production to emerge to take their place so as to ensure the continued viability of human civilization.

The same national security threat led Biden to use the National Defense Production Act of 1950 to ensure that enough solar components and panels are produced in the United States.

Biden wrote, “Pursuant to section 303(a)(7)(B) of the Act, I find that action to expand the domestic production capability for solar photovoltaic modules and module components is necessary to avert an industrial resource or critical technology item shortfall that would severely impair national defense capability.”

These executive orders will have a powerful effect, and if they do get us 100 gigawatts of new solar over the next decade, they are historic. They aren’t a substitute, though, for the Build Back Better bill, some iteration of which Joe Manchin and Chuck Schumer are now reported to be working on in the Senate. Manchin had hoped for a Republican bipartisan bill, but is said to have given up. He wants to pay for it by raising some corporate taxes, and none of his Republican colleagues would go for that.

In the meantime, President Joe Biden came to the rescue.