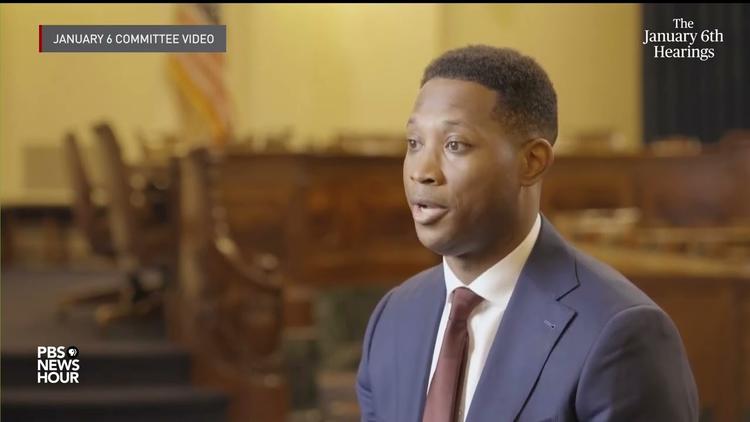 Ann Arbor (Informed Comment) – Although the Congressional inquiry into the Jan. 6 insurrection is releasing new information about the ties between the White House and the insurrectionists, that the attack on the Capitol that day was a well-planned paramilitary operation was clear from Department of Justice indictments already released. Below, I revisit one of my columns about the Oath Keepers in light of this new information.

Last winter, the FBI arrested 11 top members of the fascist militia, the Oath Keepers. They were charged with seditious conspiracy. Among those jailed was Elmer “Stewart” Rhodes, a former paratrooper in the US military and a Yale Law School graduate, who heads the white supremacist group. Cases were already prepared against 17 members of the Oath Keepers, but Rhodes and one other leader are newly charged.

What we now know from the Congressional panel is that some 200 Oath Keepers moved on the Capitol in the morning, before Trump even began speaking on the Mall. We also know that they were coordinating their movements by cell phone with someone, not yet identified, inside the White House and very possibly someone who was talking to Trump in real time about the Oath Keeper operation. It is further possible that Trump was giving the insurrectionists instructions.

We also now know that Trump intended to lead the march on the Capitol, like some Don Quixote in a business suit tilting at windmills, seeking to prevent Joe Biden from succeeding him.

That is, Trump was not just an irresponsible rabble-rouser whose rhetoric inflamed the passions of militiamen. Trump was genuinely their leader, likely in an operational sense. He was probably playing Bin Laden to the Oath Keepers’ al-Qaeda in trying to overthrow the US government.

The group was founded in 2009 in the wake of Barack Obama’s election to the presidency and comprises far right wing conspiracy theorists. It is led by the terrifyingly looney Rhodes. The Southern Poverty Law Center writes, “In 2014, Rhodes claimed the group had an unlikely 35,000 dues-paying members who are said to be mostly, although not exclusively, current and former military, law enforcement and emergency first responders.” Some Oath Keepers hold, or are running for, elective office.

Leader Rhodes said things after Biden’s win like ““This is a military invasion by the cartels and a political coup by the domestic Marxist controlled left, which sees open borders and mass-illegal invasion as their ticket to permanent illegitimate political power.”

Note how corporate Democrats like Joe Biden are misidentified as Marxists (!) and this left wing conspiracy is connected to immigration law. Note that Trump did not change immigration law one iota and millions of people immigrated into the US on his watch. This is just white supremacy dressed up as right wing outrage. In 2016, Rhodes had added to his heady mix of imaginary Marxists and menacing immigrant hordes a putative “Islamic” threat of terrorism that would collaborate with the Latino organization La Raza and with the Black Lives Matter movement. Somehow he held that the late Republican Sen. John McCain was orchestrating these sinister forces, and in 2015 Rhodes advocated hanging him.

Despite the group’s pose as a defender of the constitution against what they call “Islamic terrorism,” they are just a homegrown American version of al-Qaeda.

Al-Qaeda hijacked planes with which to attack government buildings in Washington, D.C.

The Oath Keepers planned to use boats on the Potomac to ferry over heavy weaponry with which to do the same thing.

Al-Qaeda saw the US government as a conspiracy to impose a left-liberal democratic order on people, whereas they wanted a government reflective of their ethnic and religious nativism.

The Oath Keepers agree after their own manner.

Al-Qaeda was xenophobic and did not want American Jews and Christians in the Middle East.

The Oath Keepers are xenophobic and don’t want immigrants in the U.S.

Al-Qaeda was fascinated with military training and with weaponry, and were willing to use these against innocent civilians.

The Oath Keepers also armed and trained themselves and were planning attacks on civilian lawmakers.

Al-Qaeda killed twenty-nine people inside the Pentagon with Flight 77 (plus 64 passengers) on 9/11.

In fact, the Oath Keepers came much closer to disrupting the workings of the US government than al-Qaeda did.

By the way, the al-Qaeda cell around the “Blind Sheikh,” Omar `Abdel Rahman, who plotted and carried out the first World Trade Center bombing in 1993, were also charged with seditious conspiracy, and the government won its case.

The DOJ Indictment of the Oath Keepers alleged that

“Rhodes and certain co-conspirators, to include selected regional leaders, planned to stop the lawful transfer of presidential power by January 20, 2021, which included multiple ways to deploy force. They coordinated travel across the country to enter Washington, D.C., equipped themselves with a variety of weapons, donned combat and tactical ger, and were prepared to answer Rhodes’s call to take up arms at Rhodes’s direction. Som co-conspirators also amassed firearms on the outskirts of Washington, D.C., distributed them among “quick reaction force (“QRF”) teams, and planned to use firerms in support of their plot to stop the lawful transfer of presidential power.”

Although CBS News editors circulated a memo instructing their reporters not to call January 6 an “insurrection,” it seems clear that that is exactly what it was. Why is CBS running interference for these terrorists?

The DOJ complaint says that the insurrectionists invaded the outer part of the Capitol at 2 pm on Jan. 6, and that “at that time, Rhodes entered the restricted area of the Capitol grounds and directed his followers to meet him at the Capitol.”

After Trump’s speech and his call for a march on the Capitol, more units moved out. Oath Keeper fascist brown shirts marched up the east steps of the Capitol in “stack” formation. Stack One joined an angry mob, some of whom assaulted police officers shouting “take their shields” and “Our house!” At 2:38, the indictment says, the doors were breached and Stack One advanced into the Capitol with the crowd. Stack One then split up, one group heading for the Senate Chamber, where they ran up against stiff resistance from the Capitol police. Unable to break into the Senate, they regrouped and left the building. The other half of Stack One attempted to find Speaker Nancy Pelosi in the House of Representatives, but failed to do so and left.

After Joe Biden was elected president, Rhodes messaged his group on the Signal app, “We aren’t getting through this without a civil war. Too late for that. Prepare your mind, body, spirit.” He later said that they should emulate Serbs who rose up when Slobodan Melosevic “stole their election” [ in October 2000].

As his buddies in Florida were undergoing training in “unconventional warfare,” Rhodes later texted his group that if President Biden took office, “It wil be a bloody and desperate fight. We are going to have a fight. That can’t be avoided.”

On Dec. 22, 2020, Rhodes said in an interview with a local Oath Keepers leader that if Biden came to power “We will have to do a bloody, massively bloody revolution against them. That’s what’s going to have to happen.” He also urged Trump to deploy the US military to halt the transfer of power.

Rhodes said he wanted to “scare the shit out of” congressional representatives and frighten them into decertifying Biden. Rhodes then bought a weapon sight and night-vision goggles for $7,000 and sent them to a contact near Washington, D.C., suggesting he had some night-time sniping in mind.

Some conspirators said they planned to bring weapons (“long rifles, some sidearms”), others said they would depend on the quick reaction teams to bring them in from 10 minutes outside the city at the right time. One of them, Caldwell, proposed using a boat on the Potomac to bring the “heavy weapons” over.

Rhodes seems to have spent $20,000 on weaponry and ammunition for the operation. On the morning of January 6, Oath Keeper leaders spoke of “armed conflict” and “guerrilla war.”

After their plot to find Vice President Pence, Speaker Pelosi, and other representatives and Senators failed, the Oath Keepers continued to conspire to return the next morning, or in subsequent weeks. Rhodes bought another $15,000 or so of weaponry and sights. They seem to have wanted to stop the inauguration on January 20, but could not find a way to do so. The inauguration was small and very well guarded, but if it had been a traditional sort of event, it looks as though the Oath Keepers would have tried to shoot it up.

January 6 and its aftermath clearly could have been far more bloody if the Capitol police and then the Secret Service had not done such a good job of protecting elected officials from these heavily armed and militarily trained wack jobs. It should be remembered how the odious Trump cultivated these right-wing militias, and told a similar group to “stand back and stand by” during his debate with Joe Biden. They stood by all right.