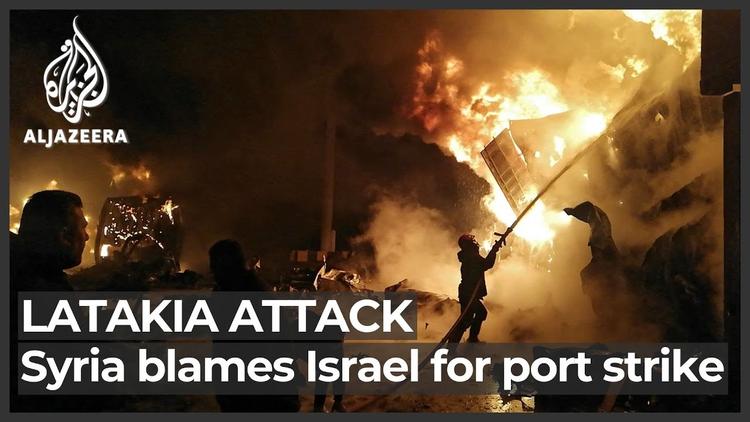 Ann Arbor (Informed Comment) – According to Tass, Maria Zakharova, the spokewsoman for the Russian Foreign Ministry said of Israel’s bombardment on Friday before dawn of runways at Damascus International Airport, closing it, “We demand that the Israeli side stop this vicious and dangerous practice.”

Zakharova made clear the reason for the unusually fierce condemnation of Israel by Moscow, saying that such attacks “lead to a decrease in the military capacity of the Syrian Armed Forces and have a negative impact on the effectiveness of efforts to combat terrorism on Syrian soil.”

Backed by the Russian Aerospace Forces, the Syrian government of Bashar al-Assad has won the civil war, but still faces challenges from hard line Muslim guerrillas based in the northern Idlib Province, which are given some cover by Turkish support. The Idlib-based Council for the Liberation of the Levant (Hay’at Tahrir al-Sham or HTS) remains a threat to the Syrian government.

Russia and the al-Assad government depend on Iranian, Iraqi and Lebanese Shiite fighters to check the Sunni fundamentalist guerrillas, which angers Israel. The Israelis don’t like being direct neighbors of Iran’s Revolutionary Guards Corps, and don’t like the southern Lebanese party-militia, Hezbollah, having free run of Syria, from which they could fire rockets at Israel.

Israel and Russia have worked out a framework for security cooperation that allows Israel to strike at the Shiite militias if they stray from their mission of fighting the Sunni fundamentalists and begin plotting to hit Israel, or if they become too audacious in using Syria to import heavy weapons with which Hezbollah could confront Israel in South Lebanon.

The Israelis say that they hit Damascus Airport because it was being used to bring in weapons for Hezbollah from Iran.

While the Israeli-Russian “deconfliction mechanism” seems to work when Israel simply strikes a Hezbollah convoy, attacking Damascus Airport goes beyond just targeting Hezbollah to affecting the smooth functioning of the Baath government itself. It may also have endangered Russian personnel at the airport, and we know that in the past President Vladimir Putin has read the Israeli prime minister the riot act whenever their Syria strikes came close to hurting Russian troops.

Russia is bogged down in Ukraine and has had to draw down military personnel who had been stationed in Syria, and so Moscow feels vulnerable in Syria at the moment. Moreover, Vladimir Putin is unhappy about Israel’s neutrality on the Ukraine issue and its refusal to support Russia. In fact, although Israel refused to join the American boycott of the Russian economy, it voted against Russia both in the UN General Assembly and regarding Russia’s membership in the UN Human Rights Council because of its invasion of Ukraine.

The insecurity of Russia’s various overseas adventures helps explain why they lashed out at Israel for what Moscow sees as actions that undermine the viability of the al-Assad government and which give aid and comfort to the Sunni fundamentalist militias.

Turkey’s President, Tayyib Erdogan, is also said to be contemplating yet another incursion into Syria’s Kurdish regions, which is also a challenge to the Russian protectorate over Syria. The Syrian government says it is confronting Turkish-backed groups in its north.

It is not clear if Russia has the capability remaining strong in Syria and of nevertheless winning in Ukraine.