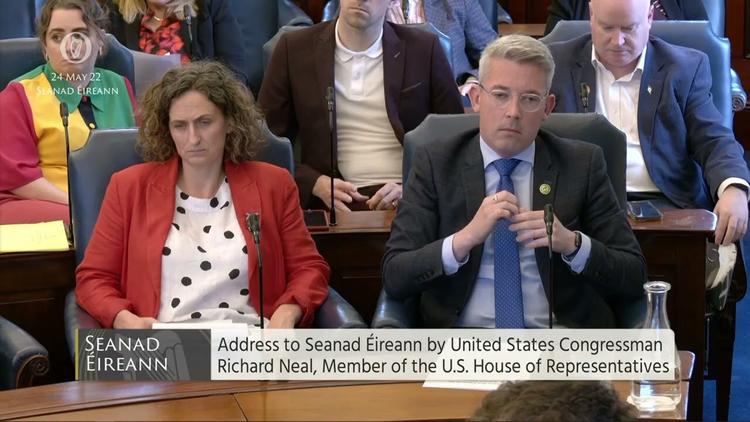 Belfast (Special to Informed Comment) – A recent Congressional cross-party delegation visit to the UK and Ireland in order to save the Good Friday Agreement (which had paved the way for peace on the island of Ireland) was marked by controversy. Delegation leader Richard Neal (D-MA) used the word “planter” which was used in the past as a name for the English-speaking Protestants who came to Ireland in 1600s during the Plantation (colonization) of Ulster by Britain.

It is Ironic that while Neal is critical of the British Empire colonizing Ireland, he is comfortable supporting Israel’s “Plantation” of squatters on the Palestinian West Bank today. His support for Israeli oppression of the Palestinian people will only contribute to the continuation of the suffering and make the possibility of peace as remote as ever. For example, in 2017, Neal supported a bill which aimed at criminalizing the boycott of Israel.

While the bill is an attack on free speech and freedom of expression in the US, as a Palestinian, I believe that such a bill is a recipe for more bloodshed since it is an attack on a non-violent mean of resistance that seeks to send a message to Israel to stop its brutality against the Palestinian people. Denying the Palestinians and others concerned about human rights violations the right to protest peacefully against the Israeli colonization and ethnic cleansing of Palestine will only play into the hands of those who advocate violence. It will also encourages Israel to continue its human rights violations including killing defenseless Palestinian civilians, including children which inevitably provoke a strong Palestinian reaction.

This contradiction in Neal’s politics is a reflection of double standards in his own Democratic Party and the American foreign policy in general when it comes to the rights of Palestinians. Only recently, the US State Department removed the Israeli far right racist organization Kahane Chai from its list of foreign terrorist organizations. Kahane Chai was previously known as Kach. It was founded by the American-born late Israeli politician Meir Kahane. He was also the founder of the American violent group the Jewish Defense League (JDL) which was responsible for the assassination of the Palestinian-American Alex Odeh and other violent attacks. Kahane himself was elected to the Israeli Knesset in 1984.

I remember when I was a child growing up in Palestine in the 1980s, Kahana and his Kach thugs used to organize demonstrations calling for the expulsion of the Palestinians from their homeland. On May 20 1994, American-born physician and member of Kahana Chai opened fire on Palestinians who were praying at the Ibrahimi mosque in Hebron killing 29 Palestinians.

This decision to delist Kach was badly timed as well. It came not long after an Amnesty International report called out Israel as an apartheid state and after the Israeli assassination of the Aljazeera Palestinian journalist Shireen Abu Akleh. It is no wonder why another Palestinian journalist was killed by Israel on Wednesday, June 1st, her first day of work.

in contrast, despite the full co-operation of the Palestine Liberation Organization (PLO) with Israel including handing over Palestinians wanted by Israel to the Israeli security services and fulfilling all the obligations required by the agreements it signed with Israel and brokered by the US, the State Department still lists the PLO as a terrorist organization. In the light of delisting Kach as a terror group, the Palestinian Authority (PA) wrote to Biden administration asking it to remove the PLO from the US terror list. In its letter the PA said “We expressed our astonishment and our absolute rejection of the persistence of this unjust classification of a people under occupation at a time when the Kach terrorist organization is removed from those lists.”

If the US was to apply this logic to the conflict in Ukraine, then its intervention will be turned on its head. It will be arming and financing Russia. It will also be preventing any sanctions by the outside world against Russia. The Ukrainian resistance will be labeled as terrorism and blamed for the Russian invasion.

This unethical foreign policy is not only damaging the US reputation but it is also costing innocent lives. There is a need for a balanced foreign policy if the US administration is concerned about the global peace and justice. For people like Richard Neal, visiting places like Gaza would be a good start for him that if his Israeli friends don’t prevent him from entering Gaza like what they did with a recent delegation of parliamentarians from the European Union. .