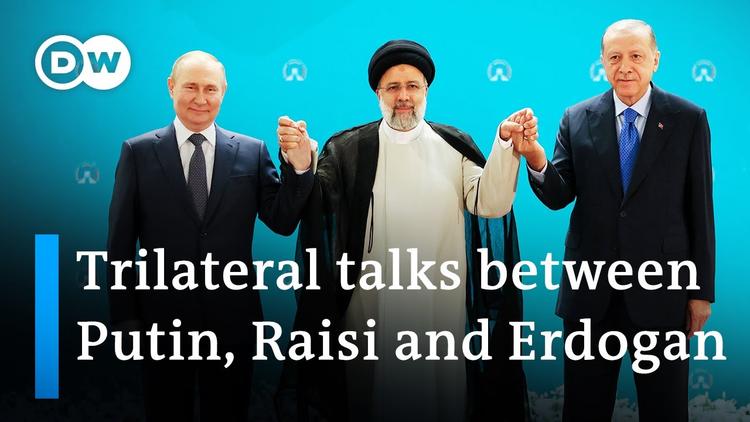 Ann Arbor (Informed Comment) – The leaders of Russia, Iran and Turkey arrived on Tuesday in Tehran for a summit on guaranteeing the Syrian peace process in the framework of the Astana negotiations. But since this summit took place in the wake of President Joe Biden’s trip to the Middle East to create a united Israeli – Gulf Arab front against Iran, it was dominated by geopolitical considerations beyond Syria. In particular, Russia was seeking Iranian support for its Ukraine War in return for substantial Russian investments in Iran’s energy sector. Turkey was seeking to mediate between Russia and Ukraine so as to allow the export of Ukrainian wheat, some of which would supply Turkey.

Russia and Iran have been closely allied in Syria, where they intervened to prop up the one-party, dictatorial government of Bashar al-Assad against a popular uprising that turned into a civil war, and where rebel fighters increasingly took on a Sunni Muslim fundamentalist tinge when they got little support from European states but found patrons in the Arab Gulf.

The BBC Persian Service reports that the clerical Leader of Iran, Ali Khamenei, called the North Atlantic Treaty Organization (NATO) “a dangerous organization,” and said that if Russian President Vladimir Putin had not invaded Ukraine, the other side would have interfered so heavily as to ensure an outbreak of war anyway.

Iran and Russia are also part of an expanding rail network in Central Asia. Russia hopes to ship goods to India via Iran and the Arabian Sea, through the Indian-operated Chabahar Port on Iran’s Gulf of Oman coast.

The state news service Irna quotes parliamentarian Shahriyar Haydari as saying that on several US-related policy issues, Russia and Iran see eye to eye. He noted Russia’s supportive views on reactivating the 2015 Iran nuclear deal on terms favorable to Iran. The US is attempting to browbeat Iran into coming back to full compliance with the deal without offering any meaningful sanctions relief, so that it is hard to see what Iran would get out of it.

Iran would like to expand its trade with Russia and Turkey to $70 billion a year.

Irna also reports that one outcome of the meetings was a memorandum of understanding between Russia and Iran in which Russian corporations, including Gazprom, pledged $40 billion in new investments in the Iranian oil and gas industry. Russian firms currently have $4 billion in Iran investments.

Russia will invest in oil drilling in the North Pars field, and in the Kish gas field project, the South Pars pressure boosting project, and the development of Iranian Liquefied Natural Gas (LNG). Some of these plans had been broached by Royal Dutch Shell or the French Total SA, but these companies withdrew under the threat of US Treasury Department sanctions. The 2015 nuclear deal was supposed to lead to the lifting of international sanctions on Iran, but because the Republican-held Congress refused to lift US sanctions, US threats of fines caused European firms to pull out. In May 2018 Trump withdrew from the deal, called the Joint Comprehensive Plan of Action (JCPOA), even though Iran had been in compliance, freeing Iran to produce High Enriched Uranium for the first time. President Biden is attempting to negotiate a reentry to the JCPOA for both the US and Iran.

The two countries may also engage in riyal and rupee trade with one another, avoiding dollars. This arrangement would allow them to escape the hold of US sanctions, since the Treasury Department has no authority over non-dollar trade. On the other hand, it locks them into trading with one another, since few other countries would want Iranian or Russian currency.

Russia and Iran are both suffering from maximum pressure sanctions by the US, which is attempting to crash their economies and currencies and prevent their oil and gas exports. The two cannot be sanctioned more than they already are, so defying the US to team up makes good economic sense.

We may be seeing the limits of American economic power– trying to take on both Russia and Iran at the same time, plus threatening China, may be classical imperial overstretch.