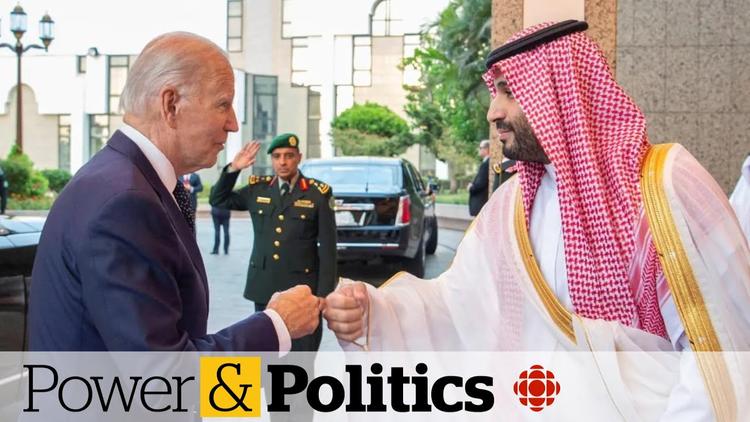 Ann Arbor (Informed Comment) – Although President Joe Biden’s trip to Saudi Arabia was ostensibly about petroleum and attempting to lower gasoline prices in the US, it doesn’t seem to me that that rationale entirely explains Biden’s about-face on Saudi Arabia. For one thing, Biden must have been told that Saudi Arabia does not have much extra capacity to put more petroleum on the market and so cannot itself lower prices. Whether OPEC will be willing to loosen the quotas for member states is unclear, and whether there is much extra capacity in the organization as a whole is a question mark.

So if it isn’t all about oil, what is driving the president’s Middle East trip? On the one hand, I think he is trying to pressure Iran into coming back to the Joint Comprehensive Plan of Action or JCPOA, the 2015 nuclear deal. If Biden could close that deal Iran would put 2 million barrels a day on the market immediately, which would likely begin bringing down prices at the pump in short order.

On the other hand, I wonder if Biden is playing defense, trying to keep long-time US partners from switching to China and Russia.

Biden’s central foreign policy initiative as of last February is to defeat Russia in Ukraine or at least to make it pay an enormous price for its invasion of Ukraine. Biden has orchestrated a widespread boycott of the Russian economy by America’s European allies, and the provision of military and other aid to Ukraine.

While Biden has had some success in overcoming German skittishness about getting involved in that effort, and has gotten all of the EU except for Hungary on board with ending imports of petroleum from Russia, his efforts have fallen on fallow ground in the Middle East.

No diplomatic partner of the US in the latter region has shown any interest in joining Biden’s crusade against the Russian Federation.

Even the one actual U.S. ally in the region, Turkey, despite being part of NATO, is declining to boycott Russia, though it does sell drones to Ukraine. The most Turkey is willing to do is to negotiate with Russia to allow Ukrainian grain exports, from which Turkey would benefit.

Neither Saudi Arabia nor Israel has pledged to defend the US, and so they are not allies, unlike Turkey, which fought alongside US troops as part of NATO in Korea and again in Afghanistan

Israel has been careful not to offend Russia, only yielding to US pressure on a few minor votes at the U.N. Egypt is cozying up to Russia and China, and desperately needs Russian wheat if it is to avoid another revolution.

Saudi Arabia is actually importing discounted Russian oil at a third off for its own citizens’ use and then exporting more of its own petroleum at world market prices, making a pretty penny on the transaction. The Russian oil is so deeply discounted because of US sanctions on both the petroleum and on Russian bank transactions, making it difficult to move.

Not only are US partners not stepping up to boycott Russia, some are actively swinging to Russia and China for security and trade relations because they have developed doubts about the US commitment to them. President Barack Obama’s 2015 Iran deal shook the Arab Gulf states to their core. They liked Trump better, but were aware that he could not exactly be depended on in a crunch, seeing how he threw Qatar under the bus in 2017 and was willing to break up NATO.

Russia is part of OPEC+, the extended Organization of Petroleum Exporting Countries, and coordinates on pricing efforts. What if Russia could prevail upon OPEC to tighten oil exports, bringing higher prices and more revenues both to Moscow and to the central OPEC states?

By meeting with the Saudi royal family and, on Saturday, with the Gulf Cooperation Council, Biden is attempting to forestall a stampede of these countries to China, with which most of them already do a great deal of business, and which never bothers them about not having free and fair elections. How security-linked the trip was is obvious from the agreements the White House signed in Saudi Arabia.

Reuters quotes Jake Sullivan, the National Security Adviser, as saying of Biden, “He’s intent on ensuring that there is not a vacuum in the Middle East for China and Russia to fill.”

Of course, Biden is also striving for further Israeli integration into the Middle East. Saudi Arabia announced Thursday evening that it was granting all countries overflight rights, which benefits Israel’s El Al, which can now save fuel by not having to skirt the kingdom.

He also wants to cement the ceasefire in Yemen, and finally end the Saudi/ UAE war on Yemen, about which Congress has been upset.

Finally, Biden is trying to establish security ties between Israel and the Gulf oil monarchies so as to make a united front against Iran. Some Washington hawks dream of a Middle Eastern NATO against Iran.

This hope is forlorn. The United Arab Emirates just announced an upgrade in diplomatic relations with Iran and said it is not interested in making a common front against Iran. Dubai is said to be a major money launderer for Iranian funds. Qatar has and will keep correct relations with Iran. The Arab states can’t coordinate too closely with Israel without giving away their own military secrets, and they are too suspicious to do that, even with each other. Being too close to Israel is also a security risk for the Arab states, whose peoples are deeply interested in the fate of the Palestinians, unlike Biden and many of the royal families.

If Biden wants to get a deal with Iran, he should take off some of Trump’s maximum sanctions, which have nothing to do with the country’s civilian nuclear enrichment program, especially the sanctions on the central bank, which hurt civilians. Tehran is not afraid of the Gulf postage stamp countries, even if they do have better relations than before with Israel.

As for defending US interests in the Middle East against Russia and China, it is too soon to say whether Biden’s personal diplomacy has done much to stop these countries from diversifying their security bets.