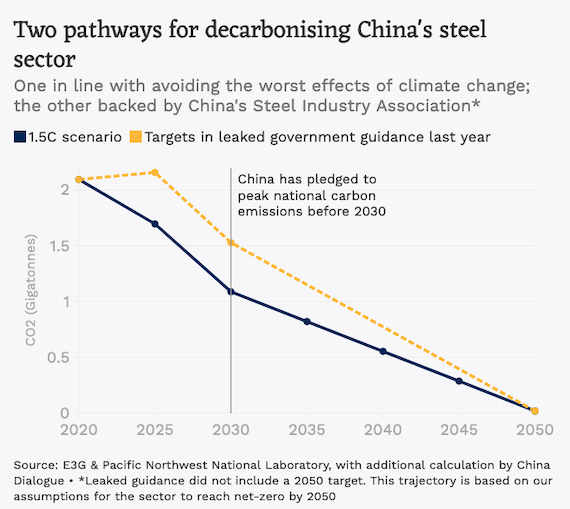 By Belinda Schäpe and Byford Tsang | –

( China Dialogue ) – What happens in China’s steel plants matters for the global climate. After power generation, the steel sector is the second largest contributor to China’s emissions, accounting for roughly 17% annually. China produces more than half of all global steel, and over 60% of carbon emissions from steel.

Recent Chinese policy has set out a series of quantitative targets for steel’s decarbonisation, supported by several emissions-saving measures. But these will not be enough to put the sector on a pathway consistent with limiting global average temperature rise to 1.5C.

The scale of the challenge facing Chinese and global steelmakers is considerable. A recent report by climate change think tank E3G and the Pacific Northwest National Laboratory has unpacked the global and regional implications of a 1.5C-compatible transformation pathway for steel decarbonisation, showing that Chinese steel emissions need to be cut in half by 2030 to keep this goal alive. However, Chinese authorities have recently pushed back the sector’s emissions target, now aiming to peak emissions from steel production “by 2030”, rather than 2025, as its industry association had originally indicated in March 2021.

A faster transition is vital, and efforts from the Chinese steel sector to explore demand-side approaches, accelerate the shift to cleaner technologies and engage in international initiatives will need to be intensified. This would also offer China the opportunity to remain competitive in future green steel markets, engage in global efforts to shape standards for industrial decarbonisation, and become a leader in greening the global steel sector.

Current policy goes in the right direction, but too slowly

For a 1.5C-consistent pathway, China’s steel sector needs to peak emissions as soon as possible, cutting emissions by about half by 2030, and by 99% in 2050, according to our report’s findings.

The latest guidance for the sector to peak emissions before 2030 therefore falls far short. In contrast, key steel-producing companies Baowu Steel, HBIS and Baotou Steel, which together account for 17% of China’s total production, have put forward more ambitious targets. They aim to peak emissions well before 2025, to significantly reduce emissions by 2030, and become net-zero by 2050. The China Iron and Steel Association (CISA) also backed a leaked draft earlier last year that proposed a peaking target by 2025 and emissions reductions of 30% by 2030.

These signals from the industry show that a faster transition is possible. The government should make full use of all policy tools available to promote a sectoral pathway with more ambitious targets, including demand-side levers such as steel recycling and improvements in the efficiency of raw material usage. It should also pursue measures to ramp up the replacement of existing steel capacity with “net zero ready” technologies for production.

Demand-side levers could play a major role in China’s steel transition. Our report finds that the adoption of a suite of material-efficiency measures, alongside a scaling up of steel recycling, has the potential to halve emissions from the steel sector in 2050, compared to 2020 levels.

Instead of producing primary steel, steel scrap can be recycled to produce new steel in electric arc furnaces (EAF), which do not require any coking coal or iron ore as inputs. Our modelling found that scrap-based steel production in EAFs results in around 85% less emissions than traditional primary production in blast furnaces. By increasing scrap-based EAF production to 56%, China could reduce steel emissions by 39% on 2020 levels come 2050.

Meanwhile, material efficiency improvements could reduce global steel emissions by 21% in 2050. These include measures such as lifetime extension, optimised design and post-use recycling of steel-intensive products and buildings. In China, we find that material efficiency improvements alone can bring production levels down, requiring 19% less steel to be produced in 2050.

Capturing the full potential of demand-side levers will require concerted policy efforts to curb primary steel production, to incentivise recycling, improve collection and sorting of steel scrap, and to extend the lifetime of steel-intensive assets. The recent government “guiding opinion” for the sector showed progress in promoting increases in recycling, setting a target for steel scrap use to increase to 300 million tonnes, up from 260 million tonnes in 2020.

Building out infrastructure with low-emission technologies

To move the steel asset base towards cleaner production, new and low-carbon technologies will be needed. Ninety-two percent of steel in China is currently produced via blast and basic oxygen furnaces (BF-BOF) – coal-based units in which metallurgical coal acts as both a source of heat and of carbon in the ironmaking process. As a result, the steel sector is responsible for more than 30% of total coal use in China and has been the main source of growth in demand for coal.

Under a 1.5C scenario, only 10% of China’s steel can be produced using BF-BOF units by 2050, and these furnaces would also need to be equipped with carbon capture and storage technologies. By 2050, most blast furnace production should be replaced by scrap-based electric arc furnaces in combination with green hydrogen-based production of direct reduced iron (DRI).

Scrap-based EAFs increase secondary production and recycling, lowering emissions from primary steel production and increasing the flexibility to meet fluctuating demand. In hydrogen-based DRI production, conventional fossil fuels are replaced by hydrogen derived from renewable energy sources, producing close to no emissions. A number of hydrogen DRI pilots have been announced over the last year in China, and companies project that hydrogen-based net-zero steel could be commercially available as early as 2025. To achieve the necessary level of emissions reductions, it is crucial that both the electricity and hydrogen used come from renewable sources, to facilitate a phase-out of unabated coal in the steel sector before 2050.

China’s target to increase the share of EAF steel output to more than 15% by 2025, as set out in the recent guiding opinion document, is broadly in line with a 1.5C scenario, but there are currently no targets for the sector’s long-term trajectory. While hydrogen-based DRI production is still in its infancy in most of the world, the first industrial-scale hydrogen-based DRI plant, built by Chinese steel producer HBIS, is expected to start operating in the city of Zhangjiakou this year.

The recent guidance also aims to expand the long-standing steel capacity swap policy to encourage the elimination of plants with low efficiency and high energy consumption. As part of the swap policy, for every new furnace approved by local governments, an equivalent or additional amount of old and inefficient blast furnaces need to be phased out.

To achieve the long-term targets above, China will have to significantly accelerate its capacity shift towards scrap-based EAF and hydrogen DRI, which will require increased policy support and incentives. In particular, the government needs to issue clear policy guidance on a decarbonisation pathway that increases recycling and material efficiency in steel production, and accelerates the upgrading of China’s current production fleet to low-emission technologies.

International engagement as the needed impetus

The varying pace of industrial decarbonisation across different countries is likely to drive the development of trade measures to tackle “carbon leakage”. China will soon have to contend with the impacts of carbon levies such as the EU’s carbon border adjustment mechanism (CBAM). Chinese officials consider CBAM to be a protectionist measure and have repeatedly spoken out against it. But these measures can also offer China incentives to accelerate its domestic transition. For example, steel producers in China using lower carbon technologies such as hydrogen-based DRI could potentially profit from the CBAM . . .