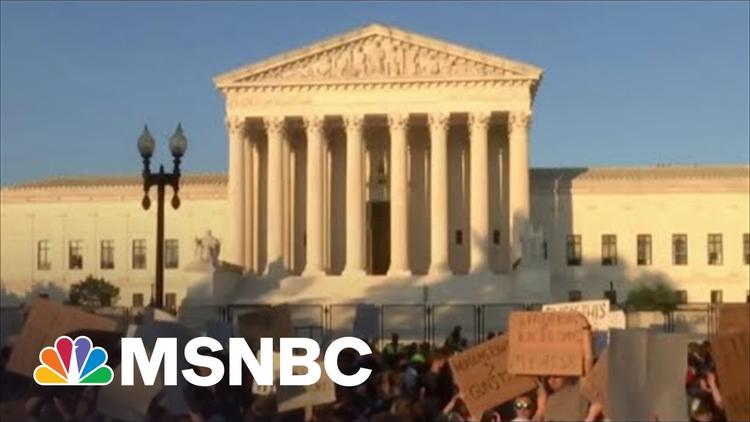 ( Otherwords.org ) – Barely a month ago we lived in a world where all Americans had the right to decide for themselves whether to continue a pregnancy. For much of the country, that’s now history.

Six judges shouldn’t get to overturn the will of voters and destroy our rights. Expand the Supreme Court.

Just weeks ago, states could implement at least some common-sense limits on carrying guns. Public school employees couldn’t impose their religious practices on students. And the EPA could hold back our climate disaster by regulating planet-heating carbon emissions from coal plants.

Thanks to an appalling power grab by the Supreme Court’s conservatives, all that’s been demolished too. And they’ve hinted that the right to take contraception, marry someone regardless of your sexual orientation, and even to choose your own elected representatives could be next.

How did we get to this place? Because Republicans spent decades cheating their way to a right-wing Supreme Court majority that enacts an extremist agenda, rather than interpreting the law.

In 2016, the Republican Senate defied the Constitution by refusing to let President Obama fill a Supreme Court vacancy. Instead, they let another voter-rejected president, Donald Trump, install right-winger Neil Gorsuch. Finally, even as voting was underway in the 2020 election, Republicans rush-approved Amy Coney Barrett’s appointment.

So we now have a hard-right Supreme Court drunk on its own power.

We need a fair balance — and we don’t have decades to set things right. We need to expand the Supreme Court to 13 justices right now, so we have judges who believe in privacy, who allow our government to protect our children from gun massacres, and who allow common sense steps to protect our future from climate change.

Republican politicians will say that changing the number of justices represents “politicizing” the Court. But it is the Republican-appointed justices who have entered politics, unleashing gun lovers to run wild, vetoing climate change regulations, canceling abortion rights, and threatening other personal freedoms.

The danger from the Republican judges is only growing.

If we allow this to continue, our political system will look a good deal more like Iran’s theocracy. Like the United States, Iran has elections. But reactionary, fundamentalist religious leaders there set election rules, decide who can run, and often override the decisions of the elected government.

The Supreme Court’s six conservative justices seem dead-set on playing this role here in our system. So the best way to curtail the power of our own black-robed fundamentalists is to increase the size of the Supreme Court.

Under the Constitution, it is for Congress to decide how many justices there will be. Over the years Congress has changed the number six times. It’s time to change them again.

For much of American history, there’s been one justice for each judicial circuit. Today we have 13 circuits, so we should have 13 justices. We cannot simply accept the unfairness of the Republican judicial takeover. We can and must act to restore balance to protect our rights, our lives, and our planet.

em>Mitchell Zimmerman is an attorney, longtime social activist, and author of the anti-racism thriller Mississippi Reckoning.