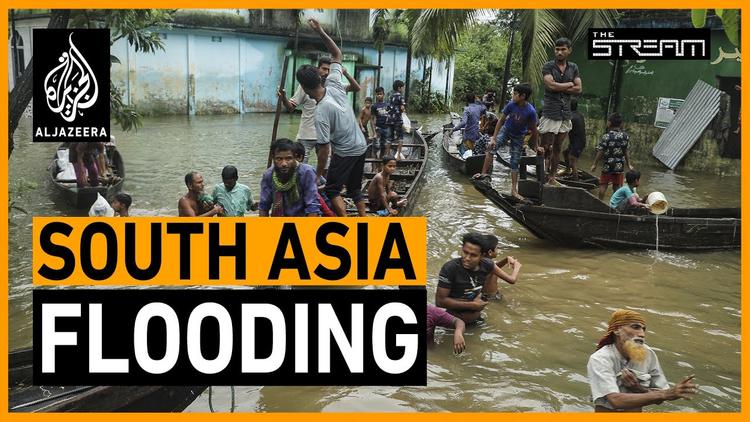 ( Globalvoices.org ) – Bangladesh is one of the countries most vulnerable to the effects of climate change in the world, as two-thirds of the country is less than 15 feet above sea level. Floods continue to be the biggest threat as each year about 26,000 square kilometres (10,000 sq mi) or around 18 percent of the country is submerged in water during the rainy season, killing thousands of people and displacing millions.

In the third week of June 2022, floods had taken a severe turn in the northeastern region of Bangladesh, especially the areas of Sylhet, Sunamganj and Netrokona. In May 2022, the Sylhet division was inundated with the first floods of the season. But in mid-June the flood was triggered by the record rainfall in the bordering India states of Meghalaya and Assam, as these waters came gushing the downstream, overflowing rivers and streams. Besides the lowlands near the border, major towns and business hubs in this region, such as Sylhet and Sunamganj went under water quickly.

In some areas the water rose to 8 feet, making this the deadliest flood in more than a century. It seemed like a doomsday situation as the power supply was cut off in inundated areas to avoid accidents, leaving millions in the dark. As the power cuts were prolonged, the majority of over 3,600 mobile towers in this region went offline, leaving around 4 million people already suffering a crisis of food and purified drinking water stranded in a communications blackout. The local airport in Sylhet was closed for six days as the runway was under water. The roads and railway connections between the cities and the rest of the country were also cut off, marooning this region.

Maria Kibtia, a student from Sylhet, tweets that people in her generation have never seen such a catastrophic flood before.

As of Friday, June 24, 68 people had died since the mid-May floods. The speed of the flash flood and the disrupted communications meant that government relief efforts took time to reach the flood-affected. The army and the air force were deployed to distribute emergency aid and rescue flood victims in remote areas.

Several political, and social organizations and the general public have come forward in various ways to help the flood victims, as people are not out of the woods yet despite some improvement in the situation. They are complementing government efforts by raising funds from the public and reaching out to the flood-affected population with medicine, clothes, food, water and other necessities. Along with the army, they are helping with rescue and resource distribution efforts. Author Hasan Morshed, from his experience of working directly in the region during the floods of 2004 and 2016, says that rescue operations are most needed during the first few days. He wrote in a Facebook post:

What do the [flood-affected] people need at this moment? At first, people need to be rescued. They need to be evacuated from the affected area quickly. The issue of feeding and sustaining them comes after that. Is it possible for anyone to help in the rescue efforts? Not possible [without logistics and access]. This requires specialized initiative.

The army started this specialized initiative to rescue people as an ally of the local administration.

Asif Saleh, the executive director of BRAC, the largest non-governmental development organization in Bangladesh, tweeted that all their offices in Sunamganj were flooded:

The organisation has allocated funds to help 52,000 affected families initially.

Meanwhile, in the face of such misery, unscrupulous traders have increased the prices of daily necessities. There is no electricity, and the candles have become scarce, people have even paid BDT 100 (USD 1) for candles originally priced at BDT 20 (USD 0.20). In the highest demand are rescue boats and trawlers. The price of renting them has gone up manifold — some people were asked to pay up to BDT 30,000 (USD 300) for a two-hour journey. Many have not been able to pay for their rescue themselves.

However, the opposite is also true, with some heartwarming tales of people helping each other in times of danger. Alim al-Razi tells an encouraging story on Facebook:

Yesterday I went to rescue my waterlogged aunt and cousins from a haor in the Gowainghat area. At first, I could not find any boat. After waiting a few hours, we could arrange a medium-sized boat. The boat driver is still in his teens — maybe 16 or 18.

It was a long journey, and he had to push the ground with logs in some places, and row in some places to bring all of us back safe crossing a large haor. When the journey ended, I found it difficult to pay him as he refused to take any money for the rescue. After much insistence, I could only manage to slip a BDT 500 (USD 5) note into his hand.

The boy’s name is Bashar. Bashar should also be in our timeline.

1 taka Meal, an initiative of Bidyanondo Foundation is traveling to remote areas with their mobile kitchen to feed thousands of people:

Our mobile kitchen is moving towards Chalbon in Sunamganj …. Cooking is egg khichuri [rice and lentils dish] …. hundreds of children are waiting for hot food ….

Why the repeated floods?

A record amount of rainfall in Cherrapunji, India is mainly what contributed to this sudden flood in Sylhet, Sunamganj. The hilly area is adjacent to the border of the Sunamganj district and the water from there flows directly into the low-lying areas of the Sunamganj and Sylhet districts of Bangladesh.

MK Fahim, an IT professional from Dhaka, shared this tweet:

The river Meghna and its tributaries carry the water from upstream in the north and eventually into the sea in the south. But, due to the reduced navigability of the river, the excess water flooded the areas adjacent to the river. AKM Saiful Islam, director of the Institute of Water and Flood Management at the Bangladesh University of Engineering, also blamed unplanned urban development for the floods. He said in an interview with BBC Bangla:

We are now building roads in the pockets of the haor [back swamp]. As a result, the natural water flow is being obstructed. […] Due to these reasons, frequent and severe floods are happening.

Many have blamed global warming for the floods. Environment and climate activist Mohaiminul Islam Zipat called for action now:

Rushnara Ali, a member of the UK Parliament of Bangladeshi descent, tweeted about the effects of climate change:

The number of climate refugees is increasing every day in Bangladesh. According to World Bank data, every year around 400,000 people are permanently migrating from rural areas to urban areas. Seventy percent of them are climate refugees. This is due to rising sea levels, rising river salinity, rising river erosion and natural disasters such as floods and tidal surges.