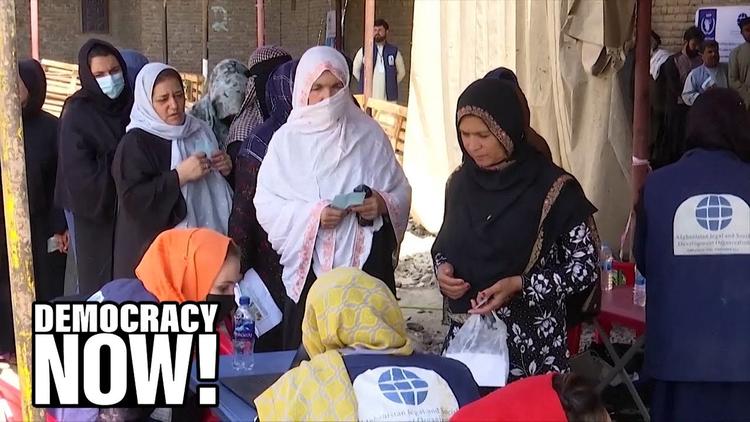 ( Foreign Policy in Focus) – A year has now passed since the tumultuous U.S. withdrawal from decades of war and occupation in Afghanistan.

With the Taliban functionally in charge, the country faces a deteriorating humanitarian crisis and economic collapse. But instead of taking action to promote stability and reinvigorate the economy, the U.S. has made it worse and penalized innocent, ordinary Afghans.

With innocent Afghans impoverished and starving, the U.S. must return money that’s rightfully theirs.

According to the United Nations, the current situation in Afghanistan is “unparalleled.” Over 24 million people require humanitarian assistance to survive, and approximately 95 percent of the country’s population has insufficient food. Malnutrition is on the rise, with many Afghans resorting to selling body parts to feed their families.

The situation was already dire in Afghanistan before the Taliban seized power. Most Afghans lived on less than $2 a day. The country had endured protracted violence, mass displacement, a drought, and multiple waves of COVID-19.

But when the Taliban returned to power, international donors responded by immediately suspending billions of dollars in aid. The result? Near-total economic and governmental collapse. “No country in the world could withstand a sharp cutoff of that aid,” said William Byrd of the U.S. Institute of Peace.

Additionally, the U.S. and European governments have blocked Afghanistan’s Central Bank, known as DAB, from accessing nearly $9 billion of the country’s own foreign currency reserves, $7 billion of which is held in the New York Federal Reserve.

This has left the country incapable of addressing its serious economic problems or engaging in international trade. Inflation has skyrocketed, sending the Afghan currency to record low values. And with the currency shortage in commercial banks, Afghans can’t even access their own bank accounts.

These actions were taken under the auspices of keeping these funds out of the Taliban’s hands. But in practice, as over 70 economists have pointed out, they’re collectively punishing all Afghans — including victims of the Taliban.

In February, President Biden doubled down on the seizure of DAB reserves by setting aside $3.5 billion to settle legal claims by some of the families of 9/11 victims. His executive order committed the remaining $3.5 billion for the purported “benefit of the Afghan people,” yet his administration has so far withheld this amount as well.

These reserves don’t belong to the United States to determine how they’re used. They legally belong to Afghanistan and are owned by the state, not its government or the current regime in Kabul.

Furthermore, the people of Afghanistan are not morally or legally responsible for the deplorable 9/11 attacks. Many families of 9/11 victims agree. Nearly 80 families have written to Biden, calling the seizure “morally wrong” and saying the last thing they want is to “take money away from starving Afghans.”

By targeting the Afghan people in this way, the U.S. has ignored its moral obligation to ameliorate the humanitarian and economic crises caused by its military intervention and failed policies. The Taliban’s rule is undoubtedly brutal, but this is no reason for the U.S. and other countries to make matters worse. The Afghan people’s continued suffering benefits no one.

After decades of war, violence, and instability, Afghanistan needs both immediate action and long-term solutions so that its people can live, dream, and rebuild. The first step, as UN Secretary-General Antonio Guterres remarked, “must be to halt the death spiral of the Afghan economy.”

President Biden should immediately reverse his executive order. With millions of Afghans impoverished and starving, the U.S. must return to the Afghan people what is rightfully theirs.