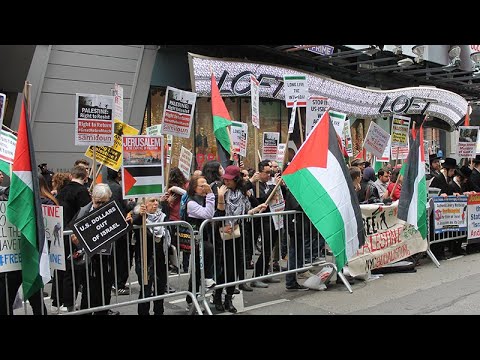 ( Middle East Monitor ) – The firing of Palestinian American woman, Natalie Abulhawa, has sparked a debate over free-speech, “cancel-culture” and the ever-growing crackdown on pro-Palestinian activism. The 25-year-old athletic trainer was fired by a private girls school in Bryn Mawr over years-old social media posts criticising Israel. In March the Council on American-Islamic Relations (CAIR) filed a federal Equal Employment Opportunity Commission (EEOC) charge on behalf of Abulhawa against the Agnes Irwin School.

In its complaint CAIR alleged that Abulhawa faced discrimination on the basis of national origin and/or religion. She was vetted and hired for just a few days before school leadership fired her after showing her social media posts that had been curated by the notorious website known as Canary Mission. The website described as a “shadowy online blacklist“, by the Jewish magazine Forward, targets college students — including Abulhawa — and professors and organisations that criticise Israel over its apartheid practices and advocate for Palestinian rights.

Canary Mission’s activities uncovered by MEMO found that the pro-Israel group publishes dossiers on pro-Palestinian activists, many of whom are students, with personal details such as their photos and locations. The website is also often used by Israeli security forces to justify deporting people from Israel. This invasive activity permanently affects student activists as it exposes them to even more online harassment and may affect their future employment opportunities. In practice, the blacklist can have a chilling effect on critics of Israel and can have professional consequences, including firings, for those who appear on its website, as reported by the Intercept.

Abulhawa’s case was covered in detail yesterday by the Philadelphia Inquirer. The US daily interviewed the Palestinian-American as well as experts on civil rights. Revelations about Canary Mission’s operations in the article sparked a wider discussion about the threat posed by the pro-Israel group to free speech and a wider discussion about the underlying hypocrisy of the moral panic over “cancel culture.. Ever since cancel culture became a popular term to describe the new form of social and cultural ostracism, where individuals are de-platformed, silenced and thrown out of social or professional circles for holding views some consider to be controversial, the crackdown on pro-Palestine activism has been conveniently overlooked.

Even before cancel culture became a familiar term, far-right pro-Israel groups like the Anti-Defamation League, American Israel Public Affairs Committee and the American Jewish Committee, not to mention Canary Mission, published reports warning of the danger posed by “pro-Palestinian” or “Arab propagandists”. The result of such campaigns, recalls the President of the Arab American Institute, James J Zogby, was Arab Americans like himself denied jobs, harassed, having speaking engagements cancelled and receiving threats of violence.

In other words, says Zogby, cancel culture is nothing new as far as pro-Palestine activists are concerned. “It’s been around for decades, with Arab Americans and Palestinian human rights supporters as the main victims. And now with over 30 states passing legislation criminalising support for BDS [Boycott, Divestment and Sanctions], the Departments of State and Education adopting the conflation of criticism of Israel with anti-Semitism, the effort to silence pro-Palestinian voices is escalating.”

Such escalation and the conflation of criticism of Israel with anti-Semitism has not only empowered pro-Israel groups to demand ever-more radical concessions, it has also proven to be destructive to social cohesion. Groups advocating for the codification of anti-Semitism that includes criticism of the Apartheid State of Israel have been campaigning for this over the past three decades using the debunked theory of “new anti-Semitism”. Our current situation where there is unjustified hypersensitivity to criticism of Israel, a crackdown on free speech and real consequences to people’s lives and careers, are the destructive results of this campaign.

Abulhawa is one of countless victims. Her story shows that there is more at stake than the career of one individual. “This particular case is going to the heart of the American fundamental right to politically dissent, to express your beliefs,” Sahar Aziz, a Rutgers Law professor and author of The Racial Muslim: When Racism Quashes Religious Freedom, is reported saying in the Philadelphia Inquirer. “And when you belong to a group that’s not afforded those beliefs at equal levels as everyone else, that’s evidence of discrimination against that group — but also a threat to those American values.”

Aziz believes that “the most vulnerable person in America in terms of having their civil rights denied outright or circumscribed is a Muslim Arab who defends Palestinian rights.” She emphasised that conflating criticism of Israel with snti-Semitism does injustice to the real, pervasive threat of anti-Semitism locally, nationally and globally. Groups such as Canary Mission, claims Aziz, use accusations of anti-Semitism to silence critics of Israel’s policies and practices in two ways:

“One is to prevent or eliminate anyone with views they disagree with from being in positions of influence at the micro or macro level,” said Aziz. “Second is to kill any kind of debate or disagreement about Israeli state policies or practices among the public, among college students, among media, among politicians.”

Flip the situation to a member of any other marginalised group speaking in support of human rights and progressive values, such as Black Lives Matter, and the illegality of Abulhawa’s termination and its violation of her civil rights would be undebatable, Aziz pointed out.

As mentioned, Abulhawa’s story in the Philadelphia Inquirer sparked a wider debate about cancel culture. “There’s no “cancel culture” that is more consistent, coherent and rooted in modern American political life than the suppression of Palestinian voices and pro-Palestinian views in US public discourse,” said Washington Post columnist Ishaan Tharoor.

Describing the hypocrisy of those advocating free speech while supporting the suppression of pro-Palestine voices, Tharoor added: “It has been grotesque to see, in recent years, people who built their whole careers enabling or participating in this OG “cancel culture” now position themselves as champions of free speech. You know who they are. And you know they will never admit their hypocrisy.”

Tharoor’s comments prompted his followers to tweet about the double-standards of people rousing moral panic over cancel culture while ignoring the state-led crackdown on critics of Israel. “We have laws in multiple states that punish people for protesting Israel and the cancel culture ppl don’t care one bit,” said one of his followers. “Cancel culture has always been a rallying cry for the elite and privileged scared to face consequences. Nothing to do with speech.”

Reacting to Abulwaha’s story, prominent American-Jewish commentator Peter Beinart said: “Any entire conversation about ‘cancel culture’ in America today that ignores its Palestinian victims is morally bankrupt.” The complete absence of Palestinian victims and suppression of Palestinian voices clearly exposes the moral bankruptcy of the debate around cancel culture. As is the case, Palestine exposes the limits of free-speech, the hypocrisy of selective outrage, the margins of human dignity and the boundaries of international law and human rights.