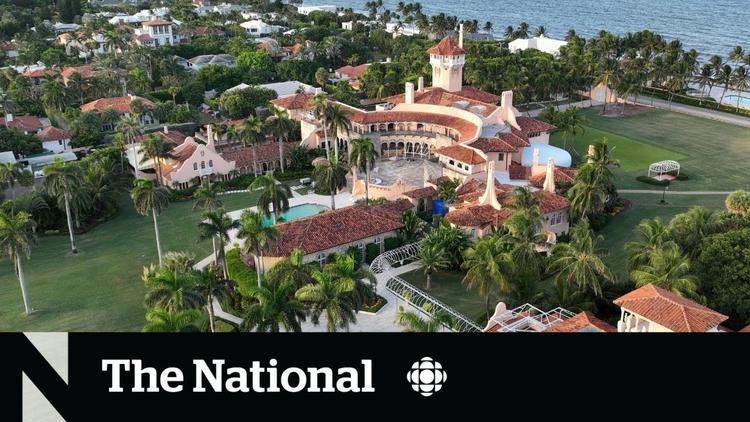 Ann Arbor (Informed Comment) – According to the Washington Post, former president Donald Trump is suspected of having kept classified nuclear secrets at his Mar-a-Lago resort, provoking the dramatic FBI execution of a search warrant on Monday. So report the intrepid Devlin Barrett, Josh Dawsey, Perry Stein, and Shane Harris.

Former government officials are not allowed to take home government documents on leaving office, since those belong to the National Archives.Trump himself signed a revision of the relevant law increasing this infraction to a felony. Such officials, including ex-presidents, may especially not take home classified documents. Nuclear secrets, whether those of the United States or foreign powers, are especially sensitive. Presidents have broad power to declassify government documents, but it does not extend to material related to nuclear weapons, which is very highly classified.

The WaPo reporters’ sources did not know the precise nature of the nuclear weapons-related documents Trump may have had at home. The documents, for instance, could pertain to the US, or to the nuclear weapons of another country, such as Russia or North Korea. In the latter cases, those countries’ intelligence agencies would love to know what the US knows about them. Nor does the WaPo team know whether the FBI actually found nuclear-related documents at Mar-a-Lago.

It is not even clear if the public will ever know the nature of these documents, beyond any description in the search warrant, which Attorney General Merrick Garland is now seeking to make public. They may be too classified to describe in public.

It is likely that that the FBI has a confidential informant at Mar-a-Lago and was confident in that person’s report of nuclear-related documents being kept at the resort. if the Department of Justice had strong reason to suspect that there were nuclear weapons-related materials at Mar-a-Lago, that explains the extraordinary decision to search an ex-president’s house for the first time in American history, and explains why a judge would sign off on the warrant. I can’t tell you how nervous top government officials in Washington are about any information pertaining to nuclear weapons.

Trump has long had a cavalier attitude to nuclear arms. When he was running for president in 2016 he made waves in East Asia by suggesting that rather than depending on the US to defend them, Japan and South Korea should simply develop their own nuclear bombs. Most experts believe that the fewer countries that have nukes, the better, since that reduces the chances for them ever to be deployed.

Trump is also alleged to have asked a foreign policy adviser why, if the US has atomic bombs, it can’t just use them.

If the WaPo report is accurate, then Trump is once again guilty of a massive piece of hypocrisy. By signing the Joint Plan for Comprehensive Action (JCPOA), or nuclear deal, in 2015, Iran committed to placing stringent limits on its civilian nuclear enrichment program. That program aims at enriching fuel for the nuclear reactor at Bushehr, to generate electricity, and for further such reactors that Iran has planned. Russia built the Bushehr plant for them.

Iran agreed to limit the amount of low-enriched uranium it stockpiles, to limit the number of its centrifuges to 6,000, to brick in the planned heavy water reactor at Arak, and to allow frequent inspections by the UN’s International Atomic Energy Agency (IAEA). These measures closed off all pathways to an Iranian nuclear weapon should the government ever change its mind and develop a military enrichment program. To date, the CIA assesses that Iran has no nuclear weapons program, and the country’s theocratic Leader, Ayatollah Ali Khamenei, has issued several formal legal opinions over the past two decades declaring that making, stockpiling or using nuclear weapons is against Islamic law.

In May of 2018 Trump abruptly pulled the US out of the JCPOA, even though the IAEA had certified that Iran had scrupulously adhered to the terms of the treaty. Trump accused Iran of seeking a nuclear weapon but never presented any proof.

Trump then signed 1,000 (one thousand) laws aimed at crippling the Iranian economy and making it a fourth world country, with all the misery that entails for ordinary Iranians. He even prevented Iran from using international bank exchanges or from ordinary commerce like selling its oil. He waged a financial and trade war against Iran the way you would against a country with which you were in a hot war.

Mind you, Iran was crushed this way even though it had been in compliance with the 2015 deal.

So Trump de facto interfered with Iranians being able to afford imported medicines and harmed their quality of life in myriads of ways. Why? Because, he falsely maintained, the Iranians were acting recklessly regarding nuclear weapons.

But it turns out that the one person in the world who may have been truly acting recklessly regarding nuclear weapons is Donald John Trump.

I give all three names that way because it is the way the journalists refer to felons in the newspapers.