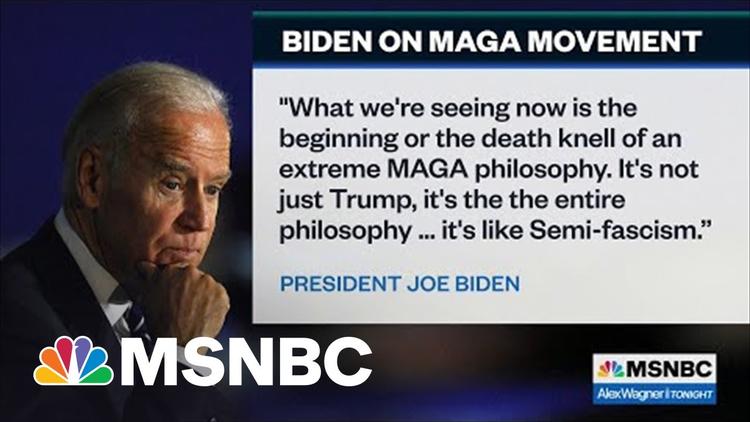 Ann Arbor (Informed Comment) – President Joe Biden told donors at a fundraising dinner a few days ago, “”The MAGA Republicans don’t just threaten our personal rights and economic security. They’re a threat to our very democracy. They refuse to accept the will of the people. They embrace … political violence. They don’t believe in democracy.” He added, “”it’s not just Trump, it’s the entire philosophy that underpins the — I’m going to say something — it’s like semi-fascism.” So reports Rebecca Falconer at Axios.

If there was anything wrong with Biden’s pronouncement, it was the use of the term “semi-.” The MAGA philosophy of Trump and his acolytes is just plan fascism, with no ‘semi’ about it.

Fascism turns out to be difficult to define. Because it depends so heavily on nativism, its themes are slightly different in each country where it takes root. In some ways it is more a style than a coherent ideology. The great linguist and novelist Umberto Eco made a list of 14 elements of fascism:

1) The cult of tradition; 2) The rejection of modern Reason in favor of irrationalism; 3) Action for action’s sake, divorced from thinking; 4) Disagreement and dissent are treason; 5) Fear of difference, racism, xenophobia; 6) Appeal to frustrated middle classes suffering economic crisis or the pressure of working class groups; 7) Paranoia about a plot against the group; 8) Branding the enemy both as too strong and too weak; 9) Condemns pacifism, exalts struggle; 10) Contempt for the weak; 11) Cult of heroes and death; 12) Machismo– disdain for women and LGBTQ+ people; 13) Populism, but of a selective sort, where favored citizens are made the norm; 14) Rejection of complex, critical reasoning in favor of simple slogans.

The very name of Trump’s movement, “Make America Great Again,” is an appeal to the cult of tradition. Trump and his MAGA crowd disdain Enlightenment reason in favor of irrational beliefs like that climate change is false Chinese propaganda or wind turbines cause cancer. The Jan. 6 insurrection was action for action’s sake and was not well thought through. We all know that Trump and his acolytes view anyone who criticizes Trump as beyond the pale. Republicans who stood against him have mostly been defeated at the polls. The racism and Islamophobia of the MAGA crowd is striking, and their hysteria about immigration is typical of fascist movements. Trump’s followers are for the most part well off, but frustrated by the shrinking white majority and threatened by union workers from below. Trump constantly talks about the plotting against him and his movement by the “Deep State,” a hostility that has been transferred to the FBI. Trump views Muslim states as weak and easily defeated, pledging to bomb them back to the stone age, but at the same time he vastly exaggerates the threat Muslims pose to US security. Trump making fun of the handicapped is an example of his contempt for the weak. His general-worship while in office was part of his cult of heroes. Trump not only has disdain for pacifism, he has contempt for any limitation on his power to elevate or deep-six a group. Trump’s anti-abortion stance and insistence to Chris Matthews that women would be punished for getting an abortion, and his branding of any woman who criticized him as “nasty,” speak to his misogyny. Many on the MAGA Right want to undo gay marriage. Their hostility to Critical Race Theory, to the extent of trying to outlaw it, is emblematic of their rejection of complex, critical reasoning.

Umberto Eco, who had grown up under Mussolini, would easily be able to recognize American fascism if he were still around. He died in February, 2016, and so did not see the rise of MAGA semi-fascism.

Despite the Republican outcry about Biden’s statement, key Republican figures go on giving supporting evidence that Biden is right. Senator Lindsey Graham told Fox “News” on Sunday, “And I’ll say this, if there is a prosecution of Donald Trump for mishandling classified information after the Clinton debacle, there will be riots in the streets.”

This threat is typical fascism. It appeals to “the folk” in the streets, it curbs the right to criticize Trump, and it exalts action for action’s sake. It has a militaristic, fascist overtone. The rule of reason and law is thrown out of the window in favor of irrational conspiracy theories and false equivalencies.