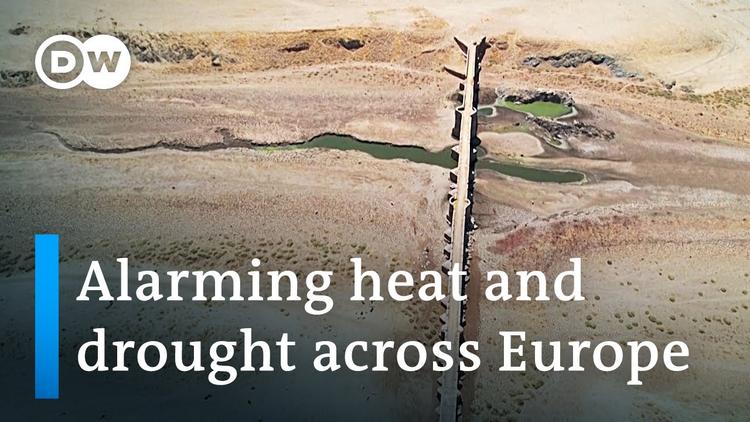 ( Clean Energy Wire ) – German rivers are suffering from extreme heat and drought, ringing the alarm for the stability of their ecosystems all over the country. Like many other parts of Europe, Germany has seen recurring heatwaves since late spring, which coupled with little precipitation throughout winter, spring and summer have led to rising water temperatures and very low water levels.

The combined effects are now starting to take a toll on fluvial ecosystems. “The Elbe river gasps for breath,” the Hamburger Abendblatt reported regarding northern and eastern Germany’s most important stream. Oxygen levels in parts of the Elbe have dropped to well below 4 milligrams per litre, the minimum considered necessary for fish to survive, according to local fishermen association Angleverband Hamburg. “The entire system is massively damaged” and the consequences would likely be felt for years, NGO BUND said. Hamburg’s second river, the Alster, meanwhile, has dried up almost entirely near its source.

Climate change impacts are increasingly felt in Germany and other parts of Europe, with severe droughts, forest fires, storms and floods gaining in frequency and intensity. Adaptation to and mitigation measures for weather extremes caused by rising temperatures are seen as prerequisites for cushioning environmental and economic damages.

Rivers in the southern state of Bavaria are equally grappling with low oxygen levels and a lack of water, the Süddeutsche Zeitung reported. “The situation is even worse than during the heatwaves of 2018 and 2019,” the article says, citing Munich’s water authority, which said that groundwater levels in the region have started to drop during the heatwaves. High water temperatures led to the resettling of large fish populations in cooler water bodies, while firefighters in Bavaria dumped cold water into rivers to reduce the temperature.

The Rhine river in western Germany is equally hit by high temperatures and a lack of fresh water. Water levels in Germany’s most important stream partly fell to merely four centimetres (outside the fairway), threatening not only a collapse of commercial shipping on the Rhine but also the river’s ecosystem, newspaper Rheinische Post reported. If high water temperatures persist, fish and other animals in the Rhine could start to encounter serious difficulties to survive in about one week, biologist Jochen Koop from the federal authority for water protection told the newspaper. NGO BUND said minimising other stress factors for the river, such as water extraction for industry or warm water injections from power plants, would be indispensable if temperatures remain high.

In the Oder river on the border with Poland, authorities are still investigating the cause of an environmental disaster that already killed thousands of fish and other animals and triggered a warning to residents to avoid contact with water. While the region has also experienced little rainfall and high temperatures for months, pollution of the major river with toxic substances is suspected to have caused the mass mortality.