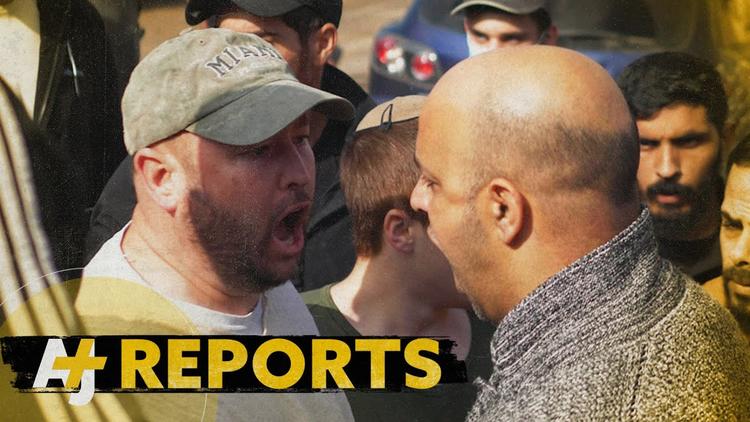 Oakland, Ca. (Special to Informed Comment) – Christian missionaries are now settling in the occupied areas of Palestine, and benefitting from Israeli land grab policies. American Evangelicals have allied with far right Zionist settlers to further entrench an imperial presence in occupied Palestine. Missionaries have been in Palestine since 1819.

Though the United States was founded on freedom of and from religion, Evangelical Americans set out to “save” American Indians, Jews, Catholics and other non-believers since before the Salem Witch Trials. They imported a narrow interpretation of Biblical myth, which they implemented in the name of Jesus. Non-believers were to be converted or smote. Jews are to be rounded up so the Apocalypse can commence. While they aid and abet the Jewish state in solidifying the occupation of Palestine, they fantasize about an Apocalypse, during which Jews must convert to Christianity or suffer in hell.

Har Bracha, is an Orthodox Jewish settlement staffed by American evangelicals from HaYovel, to support their mutual interests in Judea and Samaria, the biblical names for the West Bank.* Hayovel (The Harvest) is a “faith-based service organization” of Christian missionaries that recruits young Evangelicals to Israel to “plant trees, harvest grapes and prune vines.” They position this as an opportunity to “fulfill Biblical prophecy.” This supports Israeli imperialism and defies international law at the same time. Planting trees is a noble act to support and enrich the earth. In this case, it’s also a front to further entrench the Israeli occupation of Palestine; this time for the benefit of Christians, not Jews. It is an unlawful land grab occurring on land owned by Palestinians.

That land had been regularly cultivated by Palestinians until the 2nd Intifada ended in 2005, at which point they were banished from their own land. It was vacant; it wasn’t abandoned. Hayovel filled that vacuum as if no one ever claimed title to it, thereby contributing to Israel’s unlawful occupation. Some Jewish settlers used to be squeamish about sharing Eretz Yisrael (Land of Israel) with their Evangelical brethren, until they recognized their common ground. A press release states, “One of Hayovel’s main beliefs is that Judea and Samaria are part of Israel’s biblical heartland, which is why they are focusing their tree-planting efforts specifically in these areas,”

The Greening Israel Project is a tree planting project started by Norwegian Christian missionaries. Hayovel has become its most visible and active proponent, and is an American organization with 501 (c) 3 status. Arguably, this activity violates the terms of their status, as they have to be registered as a 501 (c) 4, to legally engage in political activism. They acknowledges that they don’t have legal rights to plant this land and say,” We do not own any of the land where we plant trees. We work closely with individual farmers, local Jewish communities, and local municipality governments. Most of the Greening Israel Project forestry sites are located on land owned and controlled by the State of Israel.” The problem is that the local farmers are Palestinians banished from their land, so the land is not “owned and controlled by the state of Israel.” Even Israel claims to own only 10% of that land.

Hayovel founder Tommy Waller said, “From our perspective, they (Palestinians) don’t have jurisdiction over that land.” He added, “I don’t want you to think we’re some sort of evil people who want to hurt Palestinians. That’s not who we are. We’re just all about the land. For us, seeing the land come alive is what the prophets spoke about, and this is like a biblical mandate for us.” Waller and his family live on Har Bracha.

Evangelical imperialism is a new dynamic. The economic brand goes back to the Romans and other empires that have come and gone. Bennett Cohen and Jerry Greenfield are men of ice cream and Jews of principle. They don’t want their products sold in the occupied areas of Palestine. But Unilever, the company that bought the brand defied its founders, by resuming sales in the occupied territories in June. Ben and Jerry’s thoughtful objections have elicited allegations of “anti-Semitism”. Right-wing settlers and Evangelists love their Chunky Monkey too.

The new licensee for B&amp;J’s in Israel is American Quality Product, owner Avi Zinger. He said, “There is no place for discrimination in the commercial sale of ice cream. It has always been important to me to ensure that all customers – no matter their identity – are free to enjoy Ben &amp; Jerry’s ice cream.” As it turns out, Unilever was blackmailed into resuming sales in the settler territories by Israeli PM Naftali Bennett, who warned of “severe consequences” for all Unilever Israeli food brands, if they didn’t resume sales.

This is a reaction to the BDS (Boycott, Divest, Sanction) movement. Thirty-five states have anti-BDS legislation in effect, which infringes on First Amendment-Free Speech rights. This is constitutionally troublesome because it directly conflicts with Article 1, Section 10 of the Constitution. Ultimately, anti-BDS laws enable local governments to quash political dissent. Israel’s Evangelical supporters have been a huge contributor to the anti-BDS movement, and now require allegiance to Zionism as a tenant of faith. The common thread is an oppressive right-wing dynamic to solidify right wing power in Israel and deny Palestinian self-determination.

*Revised 1 Sept. 2022 to acknowledge the difference between the two.