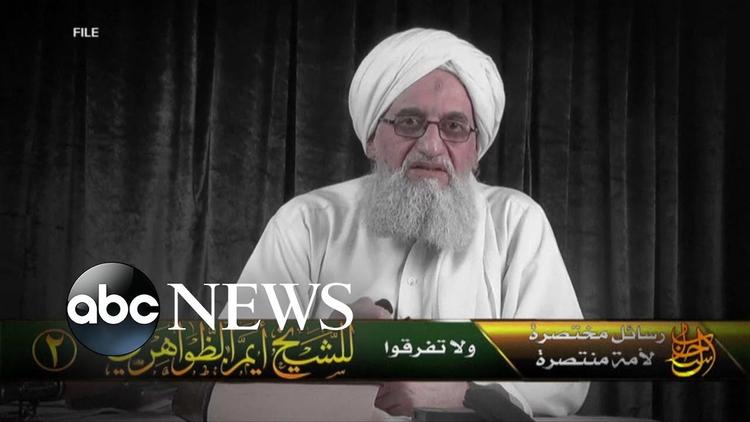 Ann Arbor (Informed Comment) – President Joe Biden announced on Monday evening that a CIA-operated drone had killed Ayman al-Zawahiri, the second leader of al-Qaeda after Usama Bin Laden, on Saturday while he stood on the balcony of a Taliban safe house in Kabul. He was allegedly hosted by the Haqqani clan, one of whose members is the Taliban minister of defense, Siraj Haqqani. Al-Zawahiri’s death brings to a close pretty decisively the era in which the main business of the US government abroad was the so-called “Global War on Terror.” Biden’s trip to the Middle East recently was basically a way of telling US allies there that they should band together for their own security, because the US is going to be off in Eastern Europe for the foreseeable future.

Ayman al-Zawahiri was from a prominent, elite Egyptian family. His relatives were Arab nationalists in that most nationalist of eras, the time of Gamal Abdel Nasser, who ruled Egypt 1954-1970 after a young officers coup in 1952. Some teenagers act out by becoming delinquents. Al-Zawahiri defied the rest of his relatively secular family by becoming a devotee of Sayyid Qutb, a Muslim Brotherhood theorist of Islamic revolution. Qutb and the Brotherhood had been involved in a failed attempt to assassinate Col. Abdel Nasser in Alexandria in 1954. A thousand or so members were rounded up and tried, some of them tortured. Qutb was jailed as a conspirator. Qutb argued that the secular, nationalist Egyptian government was full of people who only looked and spoke like Muslims but that they had actually gone over to the evil Pharaoh. They were no longer really Muslims, but godless tyrants, apostates. And, he implied, apostates deserve to be killed. Qutb was accused of conspiring again to assassinate Abdul Nasser from prison in 1965 and was executed in 1966. Al-Zawahiri, age 15, was crushed.

In 1967 when Abdel Nasser lost the 6-Day War with Israel, al-Zawahiri rejoiced. He was maybe the only Egyptian not in mourning. He was glad to see Pharaoh taken down a notch.

Al-Zawahiri yielded to his family demands that he go to medical school. By the late 1970s he had a fancy practice in the shishy Ma’adi district of Cairo. I was at the American University in Cairo then, and some of my professors lived in Ma’adi, and invited us over for pot luck. We were around the corner from al-Zawahiri’s clinic. Who knows, maybe I saw him on the street. He had taken the Hippocratic Oath to protect human life, but would become one of history’s most notorious mass murderers.

Behind the scenes, al-Zawahiri formed one of the two branches of the youth terrorist organization, the Egyptian Islamic Jihad (EIJ). They had no use for the Muslim Brotherhood, the leadership of which made a pact with President Anwar El Sadat to give up political violence if he would let them organize. Sadat was a rightwinger who took over Abdel Nasser’s leftwing government, and he thought he needed a counterweight to the leftists, so he did a deal with the right wing Muslim Brotherhood. They disapproved of land reform and nationalization of industries, so they were perfect for Sadat’s purposes even if they were a little nutty about religion. Sadat encouraged the young Muslim Brotherhood types on college campuses to organize into “Islamic Groupings” to offset the Nasserists and Communists. The Islamic Grouping formed a national organization, advised by Sheikh Abdel Rahman, the blind sheikh.

I remember in 1978 when a gaggle of Egyptian Islamic Jihad members were arrested by the Egyptian police, having been caught with bomb-making materials and bombs. It was the headline of the government-owned newspaper, al-Ahram [The Pyramids] . Al-Zawahiri still had the cover of practicing medicine in Ma’adi, but the Egyptian secret police were beginning to realize that he was dangerous.

The 1979 Islamic Revolution in Iran gave hope to religious radicals in Egypt that they could overthrow Sadat and make a Sunni version of that revolution in Egypt.

The EIJ found ways of getting in touch with cadets at the most prominent Egyptian military academy, and some secretly joined them, including one Lt. Khalid al-Islambouli. In 1981, both branches of the Egyptian Islamic Jihad made a 12-man council with the Islamic Grouping, and the ensemble decided to take out Sadat. It was decided that al-Islambouli and other recruits in the military would jump out of their troop transport vehicle during a military parade while Sadat was in the reviewing stand.

They pulled it off, and in 1981 Sadat was assassinated. However, the Egyptian masses weren’t interested in being ruled by religious zealots, and Sadat’s vice president, Hosni Mubarak, an air force officer who planned out Egypt’s campaign in the 1973 war, became president-for-life.

Egyptian religious radicals were at that point rounded up, including al-Zawahiri. In the meantime, Ronald Reagan had come to power in the US, and he and some congressional Cold Warriors wanted to respond to the Soviet invasion and occupation of Afghanistan by backing Afghan jihadis. Some of the seven main such groups were tribal and relatively secular. Several were religious extremists, such as the Hizb-i Islami of Gulbaddin Hikmatyar. Hikmatyar became the CIA favorite and got the lion’s share of the billions the US sent in via the Pakistani Inter-Services Intelligence (ISI).

The Egyptian government wanted to get the radicals off its hands. Instead of executing those implicated in Sadat’s killing or keeping them in prison, both steps sure to make further trouble, they offered them a deal. Leave Egypt and go do your jihad against the Soviets, or else. Most of them took the deal, including al-Zawahiri. It may be that the Reagan administration pressured Mubarak to send them off. We may never know. Al-Zawahiri set up a clinic on the Pakistan side, in Peshawar, to treat the jihadis wounded in firefights with the Red Army.

Meantime, I went off to Pakistan for my Ph.D. research and studied Urdu in Lahore. It was in late 1981 that I went up with a friend to Peshawar. Al-Zawahiri wasn’t there yet– he didn’t get out of prison until 1984– but the place was like Berlin in the Cold War, a hotbed of plotting, with many Afghan refugees around. I spoke Dari Persian with them and heard about their ordeals. My time in South Asia in the 80s and early 90s gave me insights into religious politics in Pakistan and Afghanistan that would later help me interpret al-Qaeda.

In 1989, the Soviets completely withdrew from Afghanistan. Usama Bin Laden, who had been a fundraiser for the Mojahedin, based in Peshawar and Saudi Arabia, went back to Jedda. He immediately gave a sermon in Jedda about the need to take down the other superpower, the US, (with which he had been implicitly allied only a few months before). He complained bitterly about US backing for Israeli mistreatment of Palestinians during the first Intifada.

By 1996, Bin Laden and al-Zawahiri had gathered again in Afghanistan, as the Taliban were taking over the country. They merged their two organizations, EIJ and al-Qaeda, and became Qaedat al-Jihad. They declared holy war on the US and al-Zawahiri developed a new approach. He came to believe that he hadn’t been successful in overthrowing Arab governments because the US propped them up. So, first, he’d have to find a way to get them out of the Middle East and make it clear that dominating it came with a high price. After the US withdrew, then its puppets in the region (as he thought of them) would be easily overthrown.

Hence the attacks on the East Africa US embassies, the attack on the USS Cole, and the 9/11 attacks.

Those attacks failed, despite their gut-wrenching death toll and all the noise they made. They did encourage copy-cat attacks on a much smaller scale– Madrid in 2004, London in 2005, Riyadh, Saudi Arabia in 2003-2006. Because I knew that terrain, I got called to Washington by think tanks a lot in the first decade of the last century, giving talks and presentations to the US government personnel who got time off to come to the panels, on what al-Qaeda was and how it operated and how I thought it could be defeated. I hope I helped.

The Bush administration took cynical advantage of 9/11 to launch a war of conquest in Iraq and to begin a 20-year military occupation of Afghanistan. Neither of the latter were useful for counter-terrorism, and indeed, were always likely to proliferate terrorism. The US was not dissuaded from playing its superpower role in the region and propping up governments it found useful. Indeed, Washington doubled down on that role, most unwisely. The Bush administration made an opening for al-Qaeda and its offshoot, ISIL in Iraq, and the US government over two decades failed to convince rural Afghans, whom they bombed assiduously all that time, to choose it over the Taliban.

The US squandered 20 years of sole superpower status and some $7 trillion on its fruitless “war on terror,” which had no benefit at all for the United States. If counter-terrorism were desirable, it could have been done with a light, rapid-response force, not with massive land campaigns in Central and West Asia.

Al-Zawahiri gradually lost any relevance. He was viewed as a joke in Egypt, and he opposed the 2011 youth revolts because they were primarily secular in character. He was backed for a while by some of the Syrian Jihadis who from 2011 tried to overthrow the Syrian government with a guerrilla war. But they faced pressure from Gulf patrons to dissociate themselves from al-Zawahiri. A section of them split off into ISIL, who thought that al-Zawahiri was old hat.

Ironically, during the Syrian civil war, until Russian and Iranian intervention ended it, the US CIA was supporting religious radical groups trying to overthrow Bashar al-Assad who at least were battlefield allies of al-Qaeda. We were back to the 1980s in some ways.

As al-Zawahiri died, the Egyptian military was still ruling Egypt and the Saudi, Jordanian and other royal families al-Qaeda saw as Quislings were all still in power and benefiting from high oil prices. The US was still the predominant superpower, and a rising China likes Muslim radicalism even less than Washington does.

Al-Zawahiri goes down in the forgotten annals of failed, minor revolutionaries, distinctive only for the number of innocent civilians he murdered. His was a dead end for the Muslim world, and the vast majority of Muslims saw al-Qaeda for what it was.

An unprecedented 18% of Arab youth now are “not religious,” and many youth and others in the Arab world give as a reason for their cooling to religion the long decades of religious radicalism that have roiled the region. Al-Zawahiri dreamed of an Islamic state — though the rigidity and harshness of his vision was more a nightmare — but his crude, Nazi-like methods undermined the very basis for any such thing.

As for the US, almost no one will care that al-Zawahiri was finally brought to justice. People younger than 33 probably mostly don’t know who he was. Americans had moved on, turning inward. This generation faces the climate emergency, economic challenges, a rising American far right that threatens the foundations of democracy in a way al-Zawahiri never did, and renewed Washington-Moscow tensions. Most Americans regret that they allowed Washington to spend trillions on its murky and self-contradictory “war on terror.” Al-Qaeda can now be seen for what it was — a small, opportunistic and destructive terrorist organization that leaves virtually no legacy, and certainly no positive one.