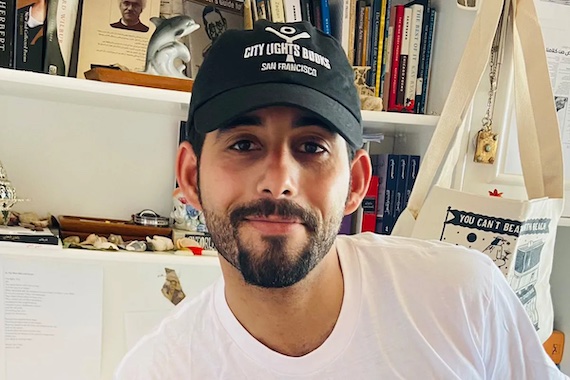 ( Middle East Monitor ) – Israel has refused to grant a visa permit to one of Gaza’s highly acclaimed poet and former Harvard fellow, Mosab Abu Toha. Author of one of the shortlisted books for this year’s Palestine Book Awards (PBA), Things You May Find Hidden in My Ear: Poems from Gaza, Toha now faces the grim possibility that he will not be able to graduate with Masters in the study of fine arts in Syracuse, New York.

“I have to be in Syracuse, NY, on August 15 and Israel is denying my permit to attend my visa interview in Jerusalem tomorrow” said Toha on Twitter on Sunday. “I applied for a permit last May. I will lose my chance to finish my MFA degree in creative writing. #help_mosab_get_his_visa.”

Yesterday Toha, who is also the founder of Edward Said Libraries, disclosed further details about the application. He said that he had submitted the request on 10 May for a permit to go to the US embassy in Jerusalem for a student visa interview scheduled for 15 June. Approval was granted said Toha, but when he entered the Erez travellers’ hall, Israeli officials in the booth ordered him to return to Gaza. Though he has re-applied for 1 August, Toha has been refused.

After announcing Israel’s rejection of his application, Toha received messages of solidarity from many of his followers, including calls to impose an academic boycott of Israel. “This is exactly why academic boycott of Israel is justified and necessary,” said Palestinian-American Professor, scholar and author, Steven Salaita. In 2014, a campaign by pro-Israel lobby groups blocked Salaita’s appointment to the University of Illinois over his criticism of the Apartheid State. At the time, Israel was carrying out one of its many onslaughts on Gaza, which left 2,251 people dead, with more than 11,000 wounded.

“What reason does the Zionist regime have to prevent this young man from acquiring a study visa?” asked Salaita, questioning the reason for Israel’s refusal of Toha’s application. “Because it can. Because it’s capricious and ruthless. Because it dispenses rights according to religion.”

Salaita appealed to PEN America, which champions free expression of authors and writers in the US and worldwide. “Please look into the violation of this writer’s right to movement and expression,” said the Academic, urging the American group to take up Toha’s plight. “Unfortunately, it’s a common occurrence for Palestinians living under Israeli occupation.”

Toha’s case is neither rare nor unique. Israel’s domination and control over the non-Jewish population in historic Palestine not only infringes on the basic human rights of the indigenous populations, it has also violently impeded the growth and flourishing of its people, like Toha. For decades, they have been subjected to Israel’s repressive system of domination and control which every major human rights group has labelled a system of racial supremacy and apartheid.

Israel’s draconian restrictions on the movement of Palestinians are regularly cited by human rights group in reports, labelling the country an Apartheid State. The occupation state employs a cruel system of population control over the Palestinian population in occupied West Bank and Gaza. This system restricts the movement of Palestinians within the Occupied Territories, between the West Bank and the Gaza Strip, into Israel, and abroad. However, only Palestinians are restricted in this manner, while Jewish citizens, including illegal settlers, are granted unrestricted travel through those territories, often on Jewish-only highways connecting illegal Jewish-only settlements to the Israeli mainland.

Palestinians’ freedom of movement rests completely at the mercy of the whim of Israeli officials. This state of affairs as documented by B’Tselem, one of several human rights groups to label Israel an Apartheid State, forces Palestinians to live in constant uncertainty, making it difficult to perform simple tasks and make plans. A Palestinian leaving home in the morning, for example, cannot know whether he or she is going to make it to work – on time, or at all – or to keep a medical appointment, visit family or any of the dozens of things people all over the world take for granted.

Israel’s restriction on the movement of Palestinians is one of the key features of the system of racial domination. Others include territorial fragmentation, segregation and control through the denial of equal nationality; discriminatory family reunification laws; the use of military rule and restrictions on the right to political participation and popular resistance; dispossession of land and property; suppression of Palestinians’ human development and denial of their economic and social rights.

The racist system of domination and control did not begin with Israel’s occupation of the West Bank and Gaza in 1967. On the contrary, the Apartheid State has used inhumane practices to control Palestinians since its founding, employing the tools of repression that have been refined over the decades. Ever since its establishment following the ethnic cleansing of more than half the Palestinian population in 1947/48, Israel granted itself unrestricted powers to control the movement of non-Jews.

Between 1948-1966, Palestinians who escaped expulsion from the territory that became part of the state of Israel, were placed under military rule for the first 18 years. Though they managed to remain, many were nevertheless displaced from their homes to which they have never been allowed to return. Israel introduced regulations which granted it unrestricted powers to control the movement of Palestinian residents, confiscate their property, allow for the closure of entire villages as military zones, demolish their houses and try them before military courts.

Even though Israel eventually abolished its military rule over Palestinian citizens in December 1966, after it successfully prevented internally displaced Palestinians from returning to their homes in empty villages by destroying them and subjecting their land to forestation, Israel transported its regime of domination and control to the remaining territories of historic Palestine, which came to be known as the Occupied Territories. The experience accumulated by the Israeli authorities during the military rule over Palestinian citizens of Israel, constituted the basis of the current repressive military regime.

In the Gaza Strip, which has been blockaded since 2007, the entire population is imprisoned as Israel forbids almost any movement in or out – except, in rare cases, it defines as humanitarian. Palestinians who wish to leave Gaza or Palestinians from other units who wish to enter it must also submit a special application for a permit to the Israeli authorities. The permits are issued sparingly and can only be obtained through a strict, arbitrary mechanism, or permit regime, which lacks transparency and clear rules. Israel treats every permit issued to a Palestinian as an act of grace, rather than the fulfilment of a vested right.

The arbitrary power Israeli soldiers have over the lives of Palestinians was powerfully illustrated yesterday in the Guardian. The UK daily interviewed an Israeli soldier who spoke candidly about the bureaucratic power of Israel “permit regime” over Palestinians yielded by the Coordinator of Government Activities in the Territories (Cogat). “The level of power and control we have was astonishing,” said the 25-year-old Israeli soldier who served in 2020-2021 at Cogat’s headquarters near the Beit El settlement, north of Ramallah. He described how Israeli soldiers have all information about a Palestinian at the click of a button, and went on to regret his slow realisation of the impact of Israel’s sprawling system of domination and control on its victims.

—
Nasim Ahmed is a writer and commentator on the Middle East and political Islam. He lives in London.