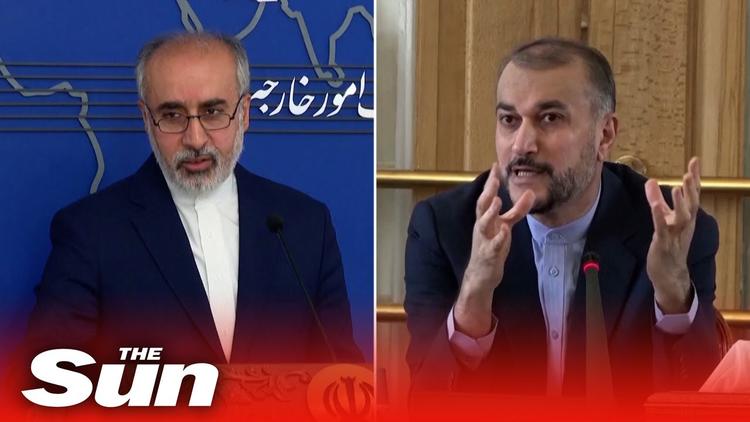 Ann Arbor (Informed Comment) – There appears to be some movement in the indirect negotiations between Iran and the United States over the reentry of the United States into the 2015 Iran nuclear deal and a return to full compliance with it by Iran. The European countries directly talking to Iran presented what they called a final draft to Tehran last week, indicating that the deal on offer is as good as it is going to get. Iran has not rejected the quasi-ulltimatum.

Iran does not have a nuclear bomb or even a nuclear weapons program. It has a civilian nuclear enrichment program, like lots of countries that have nuclear power plants that need enriched uranium for fuel. The point of the Joint Comprehensive Plan of Action or nuclear deal of 2015 was to make it so that if Iran ever decided to develop a military program and try to make a nuclear bomb, it would not be able to do so quickly. In fact, from the time Tehran made that decision until it could hope to have a nuclear device under the JCPOA would be at least a year or more, and in the meantime it would be clear to the world that that was what they were doing. Iran’s clerical Leader, Ayatollah Ali Khamenei, has given several fatwas that building, stockpiling and using nuclear weapons would violate Islamic law because of the carnage they wreak on innocent noncombatants.

Tehran seems inclined to drop its demand, which it had called a “red line,” that the US remove the Iranian Revolutionary Guards Corps, Iran’s national guard — along with companies in which it has a stake — from the State Department’s terrorist watch list, according to Natasha Bertrand and Kylie Atwood at CNN. Iran does want a guarantee it will be indemnified if the next administration pulls out of the deal again and goes back to maximum sanctions, a demand the Biden administration says there is no way to meet. All Biden can really do is take off sanctions that are rooted in presidential executive orders and veto any new sanctions passed by Congress if the Republicans take control of it again.

Trump listed the IRGC as a terrorist group, even though that makes no sense, in part in order to prevent the 2015 deal from ever being revived. I say it makes no sense because most analysts of terrorism, and even the federal code of the 1990s, acknowledge that terrorists are non-state actors. Unfortunately, there is now terrorism creep, so that people are talking about designating the entire Russian government as a terrorist organization. States are not terrorist organizations. If they engage in terrorism, that is called a “war crime,” and if they do it systematically it is a “crime against humanity.” It is perfectly fine to slap sanctions on regimes guilty of war crimes and crimes against humanity, and the United Nations Security Council has authorized military intervention against such regimes, as when Iraq’s Saddam Hussein invaded Kuwait in 1990 or when Libyan dictator Muammar Qaddafi sent tanks against civilian cities like Misrata and Benghazi.

It is bad to designate state actors as “terrorists” even if they are bad actors. For one thing, such a designation ends up harming innocent noncombatants. Trump also designated Iran’s central bank a terrorist organization, which has meant that Iranian families cannot afford the medicines they need and charitable donations to the country have been placed in jeopardy. Similar sanctions against the Taliban are causing ordinary Afghans enormous economic harm, to the extent where some of them have been reduced to boiling grass to eat. Afghanistan had become a modern economy with banks and credit, and now all that is frozen because foreign banks don’t dare deal with a terrorist central bank.

The usual warmongering blowhards in Congress — who never wanted peace with Iran because they want to invade and occupy it as they did Iraq — are decrying any renewed nuclear deal with Iran because they say it would ignore terrorism (they mean war crimes) by the Revolutionary Guards, including a recent plot by a Guardsman to have former National Security Adviser John Bolton assassinated and the stabbing of novelist Salman Rushdie by an American of Lebanese heritage who is an admirer of the Khomeinist regime in Iran.

The Obama administration wisely decided that the nuclear deal would be about Iran’s nuclear program and nothing else, and the Biden administration should stick with that.

You see, the US did not make the nuclear deal in 2015 to benefit Iran. Washington concluded that treaty, along with the other permanent members of the UN Security Council plus Germany (representing the European Union), to stop nuclear proliferation. Stopping nuclear proliferation is an unadulterated good thing. A nuclear war between major nuclear powers would throw so much debris into the atmosphere that it would cause a nuclear winter, a period of a year or two of darkness that would kill off most plant life and therefore cause billions of people to starve to death.

The 2015 deal specified that Iran could only have 6,000 centrifuges for enriching uranium, which is not enough to sustain a crash bomb program. It limited Iran to enriching uranium to 3.6%. It specified that Iran had to cancel and brick in its planned heavy water reactor, since heavy water reactors can be used to harvest fissionable material more easily and quickly than light water reactors. Iran had to agree to cast its stockpile of uranium enriched to 19.75%, some of which was used for its medical reactor to make cancer-fighting isotopes, in a form that could not be further enriched, or to send it out of the country. You need uranium enriched to 95% to make a bomb. Finally, Iran had to submit to regular inspections by the UN’s International Atomic Energy Agency. The IAEA is very thorough, and radioactive material can be sniffed out even if there are attempts to cover it up. It isn’t like you can just spray some air freshener and the Geiger counters go dark. No country under active IAEA inspections has ever developed an atomic bomb.

Iran scrupulously adhered to these limitations for three years. Then in 2018 Trump abruptly withdrew from the treaty and slapped crushing international sanctions on Iran, even stopping it from selling its oil. This, despite Iran’s adherence to the terms of the JCPOA. In fact Iran went on obeying until mid-2019, when it became clear that it would not get any sanctions relief, and was being punished more severely than it had been in 2012-2014 before the deal. Iran has since acted out, enriching way beyond the specified limit, ramping up more and better centrifuges, and basically getting closer to being able to make a bomb if the country ever decided to go in that direction. That was the result of Trump’s actions.

So the US may not like what Iran is doing in Syria or Iraq or other countries. It may think the IRGC is a bunch of terrorists. So, deal with those issues. No one is saying you can’t. But get Iran back into the JCPOA and stop proliferation. That isn’t for them, that is for us. And take the sanctions off the Iranian national bank, which is not a terrorist organization but an important national institution allowing ordinary people to live their lives.