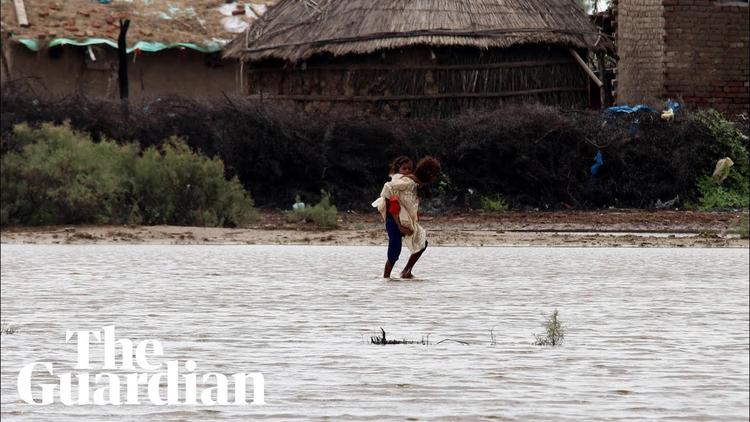 Ann Arbor (Informed Comment) – Heavy flooding in southern Pakistan has destroyed or damaged 670,000 homes, according to Reliefweb. During an ordinary monsoon season in Pakistan beginning in June and ending in September, there would be four waves of precipitation. There have been eight such waves since June.

Households in that country have an average of 6.7 persons, suggesting that about 4.5 million people have been left homeless or in rickety buildings by the walls of water that have inundated the region this month. The government estimates that 33 million people have in some way been directly affected by the floods.

Balochistan has been drenched by five times its average rainfall (averaged over 30 years) and Sindh has been inundated by 5.7 times its 30-year average. Extra heat in the Bay of Bengal and the Arabian Sea are largely responsible for this massive flooding.

Some 2 million acres of crops and and orchards have been destroyed or damaged, leaving millions bereft of a livelihood.

Nearly 800,000 livestock animals have been killed, on whom many rural families depend for earning their living.

The collapse of some infrastructure has interfered with the escape of populations from the rising waters. Nearly 2,000 miles of roads have been washed out and 145 bridges have been pulled down.

These are the worst floods since a similar extreme whether event in 2010, and perhaps they are the most destructive in recorded history.

The Indian Ocean is heating up a third faster than the rest of the world. Very warm waters in the Bay of Bengal are helping create more destructive cyclones and flooding. The air over warming waters contains more moisture than the 20th century average. Warming waters also make the winds that blow over them more erratic.

Zoha Tunio at Inside Climate News explains that recent studies have shown that the western Bay of Bengal is heating very rapidly, contributing to heavier monsoon rains.

Tunio writes, “Every year in early June, winds from the Arabian Sea push rainclouds over the southern coasts of India, marking the beginning of the summer monsoon that lasts until September and brings the Indian subcontinent more than 70 percent of its annual rainfall.”

The monsoon in South Asia is a complex weather system, but it seems clear that by driving gasoline cars, heating our homes with gas or coal, and in other ways promoting a high-carbon society, We are all making the situation in India, Pakistan and Bangladesh almost impossible.