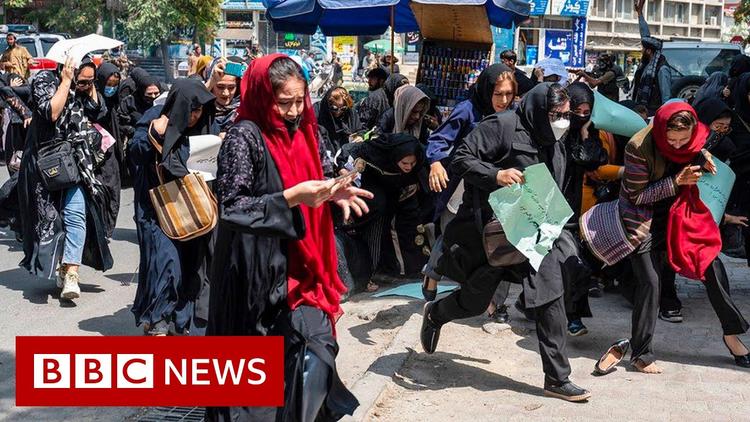 (The Conversation) – On Aug. 15, it will be a year since the Taliban’s forceful takeover of Afghanistan for a second time.

In the past year, we have witnessed a rapid return to the religious conservative rule and violation of women’s rights that many Afghans experienced during 1996-2001. As feared, the Taliban have reversed various past accomplishments in terms of women’s and girls’ rights, including limiting women’s access to employment, education, political representation and even freedom of movement.

Violence against women and girls has also been on the rise, while the Taliban ignore all international standards on human rights that many worked hard to ratify and make part of national law over the last two decades.

But Afghan women, whether inside the country or those who have been forced to flee since August 2021, have refused to remain silent in the face of these attacks on their rights.

As members of the Women Living Under Muslim Laws network, we’ve spoken to women activists, leaders and former politicians who are now in exile in countries that range from Canada to Germany and Greece. We have learned about the continued struggle for women’s rights in Afghanistan and their diverse strategies of resistance.

Despite their political differences, many of the women are committed to building a unified front against the Taliban and their conservative stance on women’s rights, democracy and human rights.

One Afghan woman activist and former politician told us:

“At this unfortunate stage of our history, we have two main objectives: to support the women’s opposition inside Afghanistan, and to develop a unified message for the international community not to show any inclination of accepting the Taliban.”

Despite dealing with the trauma of the return of the Taliban and their own sudden displacement, many of these women continue to view themselves as representatives of Afghan women.

They have been networking with other women and women’s groups, and collectively lobbying the international community to take action on Afghan women’s rights.

These efforts are a continuation of women’s work from within Afghanistan, where thanks to a constitutionally mandated gender quota adopted in 2004, at least 27 per cent of the parliamentary seats were reserved for women. This created a critical mass of women in high-level office.

Another woman activist told us:

“The parliamentary quotas opened the door to politics for us and gave us the confidence to view ourselves as equal and right-bearing citizens, at least legally. This was an important shift from the Taliban era as they viewed women more as a menace than a person.”

The opening of public life to women as members of civil society, government and parliament changed Afghanistan, and women are determined not to let these accomplishments slip away.

Those in exile are focusing their activism around three major concerns:

Women in exile have come together and formed groups and created political platforms, and work hard to raise international awareness of the Taliban’s rule.

As part of these efforts, they issue public statements, participate in media interviews, write articles and organize seminars and webinars to articulate their demands and discuss relevant political developments in Afghanistan.

They tirelessly lobby the international community and western powers, urging them not to overlook women’s rights in Afghanistan for their own political expediency. They’ve also formed alliances with peace and human right activists in the various countries where they reside.


“KABUL, AFGHANISTAN – AUGUST 13: Taliban fighters fired into the air as they dispersed a rare rally by women as they chanted “Bread, work and freedom” and marched in front of the education ministry building, days ahead of the first anniversary of the hardline Islamists’ return to power, on August 13, 2022 in Kabul, Afghanistan. The collapse of the economy and the freezing of Afghan and donor funds after the Taliban takeover of the country in August 2021 created a humanitarian crisis. Most art, culture and pastimes have been banned. The female population have also had to quit jobs and young girls after the age of 12 can no longer go to school or complete further education. (Photo by Nava Jamshidi/Getty Images).”

A central worry the women have shared with us is the possibility that western governments might find it convenient to gloss over the Taliban’s harsh rule and grant them legitimacy.

The women point out that any tolerance of the Taliban’s so-called Islamic rule will have negative implications for other religious fundamentalist groups in the region and beyond.

To show how the Taliban have weaponized Islam for their own gain, many Afghan women leaders are working to remind the international community that few Muslim-majority countries, including highly conservative Saudi Arabia, have such draconian anti-women policies.

Highlighting the un-Islamic nature of the Taliban’s rule has been a key tactic of women’s activism in exile, often in collaboration with other women’s rights groups and movements that raise awareness of the dangers of religious fundamentalist rule on women’s rights. That includes our network, Women Living Under Muslim Laws.

These women activists from Afghanistan know the important impact that the United Nations, the European Union and other international organizations could have on Afghanistan’s current political turmoil. Consequently, they’ve been lobbying these bodies, reminding them to abide by their own human rights standards.

Women are currently urging the UN against renewing a travel ban exemption for members of the Taliban that was originally issued to the group’s leadership to allow international talks in support of Afghan reconciliation and peace.

The women have been calling out the grave injustice that allows the Taliban to travel internationally in pursuit of their political goals, while women inside Afghanistan have been deprived of the right to go to school, visit health centres or to simply leave their homes.

With the war in Ukraine and the distraction of the public away from Afghanistan, governments are rolling back their promises to the Afghan people living under Taliban rule.

Many Afghans view this as a betrayal, while many Canadians regard it as being at odds with Canada’s humanitarian values.

On the anniversary of the Taliban takeover of Afghanistan, it’s time to redirect our attention to the country and listen to those who are well-positioned to advise us on strategies to bring peace, security, gender equality, human rights and democracy to Afghanistan: its women activists and leaders.