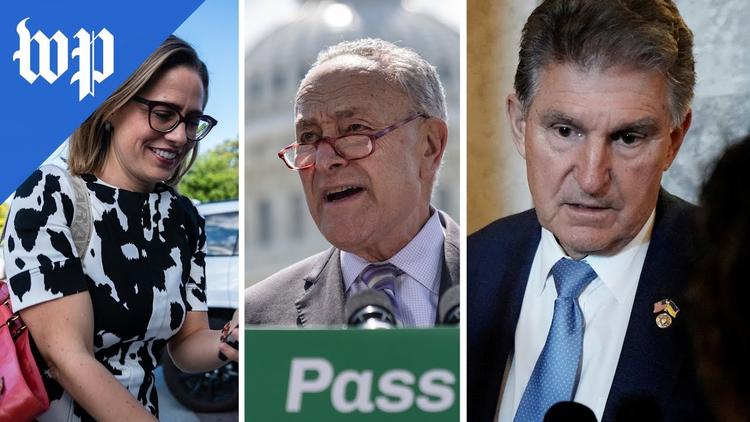 Ann Arbor (Informed Comment) – The Democrats in the Senate Passed the Inflation Reduction Act on Sunday, with its nearly $370 billion in new spending on the green energy transition. The Democratic majority in the House of Representatives is such that the bill will certainly be passed into law at the end of this month when the congressmen came back from recess. This is an epochal achievement, and may be the beginning of the end of the climate emergency.

We are standing at the beginning of another Industrial Revolution, one destined to reshape the lives of humanity as vitally as did the rise of the steam engine.

Although it is true that Senator Joe Manchin (and, for all we know some other Dem senators) slipped some goodies into the bill for Big Carbon, those are small potatoes compared to the massive sums devoted to climate change amelioration. And, those funds come on top of billions that were in last fall’s Infrastructure Act for setting up charging stations around the country for electric vehicles, supplying schools with electric buses, and emissions reductions at ports and airports.

One reason that the green energy billions matter far more than any residual federal support for fossil fuels is that American energy is no longer a level playing field. It is starkly tilted against fossil fuels, both because of price structures and because of state government policy in big important states like California and New York.

According to the Energy Information Administration, the US added 15 Gigawatts (GW) of new electricity generating capacity in the first six months of 2022. It broke down this way:

So that’s 11.1 new green energy gigawatts vs. 4.3 new fossil fuel gigawatts. That’s in two quarters where wind and solar installations faced supply line and component difficulties and so fell off a little. And they still were 62% of new electricity generating capacity, with wind at 34% all by itself.

So what happens if the government comes in with tax write-offs and billions for research and development, allowing solar panels and batteries to become much cheaper and more efficient?

And that’s not all. In the same six months, the US retired 8.8 GW in electric generating capacity, three-fourths of it coal plants, then some gas plants and 9% of the retirement was nuclear. Despite a slight uptick this year because of Russia’s invasion of Ukraine and subsequent high methane gas prices, coal is doomed and will decline to almost zero in this decade. Methane gas is also doomed but may last a little longer.

What of the rest of this year? Even before the IRA passed, the EIA expected nearly 30 gigawatts of new electric capacity to go up in the US by the end of this year, with nearly half of it being from solar (13.6 GW) and a fifth being from wind (6 GW). A further 4.5 GW in battery storage is also expected. Many of these projects will come online in December to get this year’s tax breaks. Many of the solar panels to be installed this year were made in China or in Southeast Asia, and there were bottlenecks caused by a Commerce Department investigation of the latter, which President Biden has solved for the next two years.

So, new electricity generating capacity in the US will double the rest of this year and 82% of it will be wind, solar and battery, i.e. green.

So that was the landscape before the IRA passed. It should be obvious what is going to happen next. Energy companies will have a choice of putting in gas plants at high cost and a low government subsidy or putting in solar and wind at a low cost and high government subsidies.

Leveraging research and development money is also crucial. The cost of solar power has plummeted 90% since 2002. But panels are still only about 20% efficient. New techniques and materials can double their efficiency and cut their cost in half. All that is needed is that someone pay for the research. And the US government under the Democrats just volunteered $2 billion for research at National Labs, plus all the private research that will be impelled by government support for the green energy sector.

Remember that many of the 50 states, even Republican states like Louisiana, have their own investments in a switch to green energy. New York is going big into offshore wind, as is Louisiana. The IRA has money in it to encourage states to go in that direction, again leveraging processes already in play.

As big wind and solar corporations emerge with their own lobbyists, the Republican Party’s attachment to the declining fossil fuel corporations will be weakened and then broken, and by the end of this decade we could see hawkish green Republicans in the House and Senate backed by companies like Xcel.

So pay no attention to the naysayers and doomsters and nitpickers. The IRA is great good news, because it will fill out the sails of a ship that was already racing ahead of the competition. It will likely cut US emissions by about 40% from 2006 levels, and it is possible that the innovations it provokes will take us even further, to meet President Biden’s goal of a 50% cut.

A new world is dawning, one in which humanity dodges the huge hail of bullets of the climate emergency. If we can get to zero carbon by 2050, the oceans will take up all the carbon dioxide we’ve put into the atmosphere since the Industrial Revolution, and temperatures will almost immediately stop rising, and then gradually will fall back to the preindustrial normal. The rest of this century will still be very challenging, but those challenges can be met if we can avoid tipping the climate into a state of chaos.