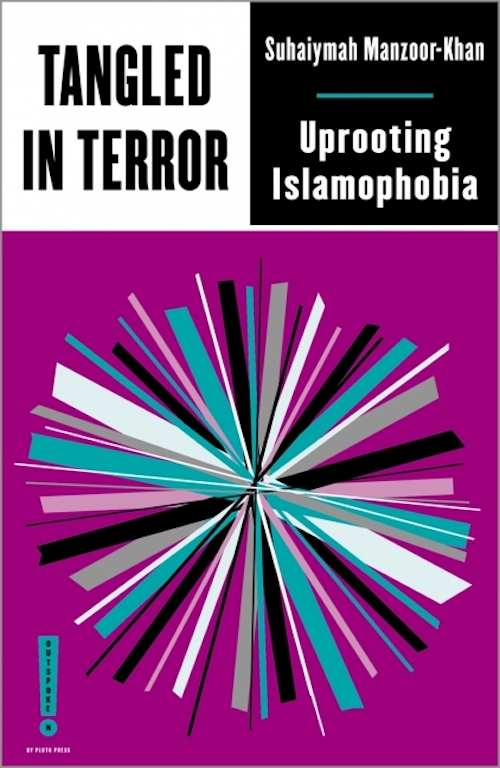 “This book might make you uncomfortable, but if you stick with me perhaps you will come to see that a reductive understanding of Islamophobia as just an experience of hate or prejudice at the hands of Islamophobes is not just misguided, it deliberately diverts us from seeing the violence of the world and thus produces solutions that pose no challenge to it.”[1] The British author Suhaiymah Manzoor-Khan begins her latest book, “Tangled in Terror: Uprooting Islamophobia”, with a promise to the reader.

These initial lines encapsulate the central message in Manzoor-Khan’s volume: Islamophobia is a structural problem that both derives from and deepens colonial and post-colonial practices of domination. In the tradition of authors such as the Indian-American scholar and activist Deepa Kumar, Manzoor-Khan also approaches Islamophobia “as a form of neo-imperialism.”[2]

Manzoor-Khan, who is currently a Writer in Residence at the Leeds Playhouse and a Visiting Research Fellow in the School of Geography at Queen Mary University of London, does not focus on how Islamophobia is defined. Instead, she concentrates on “what Islamophobia does (author’s italics).”[3] If this is her focus, it is not because there is a consensus around the meaning of Islamophobia or at least its existence. Sadly enough, mainstream newspapers such as The Wall Street Journal and The Times have published in the last decade articles in which Islamophobia was referred to as “a nasty neologism” and “a fiction”, respectively.

Manzoor-Khan, who defines herself as a “Muslim of Pakistani heritage”, loses little time in proving Islamophobia exists. This is certainly a smart choice. Embarking on a lengthy discussion of the ample evidence proving Islamophobia is a real problem would probably give its deniers too prominent a role.[4] Instead, she explores Islamophobia’s inner workings and the functions it performs.

Manzoor-Khan argues that one of Islamophobia’s key roles is justifying imperialist projects in Muslim countries. Such is the case with the invasion of Iraq in 2003. Despite the enmity between Al-Qaeda and Saddam Hussein, the occupation of Iraq was presented as a logical consequence of 9/11 because Iraq is largely a Muslim country. As University of Michigan Professor Juan Cole remarked, the language of a ‘War On Terror’ became a “code for war with the Muslim world.”[5]

Manzoor-Khan remarks that “it is an open secret that the US invaded Iraq for oil” but this does not capture the complexity of the issue.[6] Even though oil can be considered a relevant factor, other elements need to be taken into account, such as the demonstrative effect of the invasion through its display of US military hegemony.

Manzoor-Khan describes how the stereotypical ‘Muslim terrorist’ is used as an alibi for the implementation of imperialist practices of resource extraction, mass repression, and violence abroad. At home, the all-encompassing logic of ‘national security’, as well as the fear of terrorism, mask discriminative practices that particularly target Muslims. “Tangled in Terror” focuses on the reality in the United Kingdom, but many of the book’s findings can be extrapolated to other Western countries with significant Muslim minorities.

The UK laws on terrorism are incredibly vague, something that leaves considerable room for racist and Islamophobic stereotypes to guide the action of the police and security agencies. Rizwaan Sabir, who in 2008 was a MA student at the University of Nottingham, suffered the consequences of this discretionary power. Sabir downloaded an al-Qaeda manual as part of his research on terrorism and was soon detained by the police. As he explains in his recently published book “The Suspect: Counterterrorism, Islam and the Security State”, Sabir continued to be pulled over at security checks and while driving even after he was exonerated.

Manzoor-Khan denounces how Muslims are constantly demanded to disown radical discourses and practices from the so-called Islamic State or Al-Qaeda. In an ironic tragedy, however, seeking to know more about these groups can result in legal problems if you are Muslim, as Sabir experienced first-hand. When Muslims are targeted by laws on an Islamophobic basis, this often results in a certain political apathy derived from the feeling that “the apparatus is too big to resist.”[7]

An important part of this apparatus is the Prevent program, introduced by the British government in 2003 and officially aimed at predicting who might become a terrorist and then intervening to thwart the radicalization process. The program has been defended by successive governments as targeting different kinds of extremism – including far-right white supremacism, for instance. Manzoor-Khan writes that “the Government can claim Prevent is colour-blind because it does not specific policing Muslims, but its function depends on an Islamophobic context where ‘radicalisation’ is associated with us.”[8] Earlier this month, Prime Minister candidate Rishi Sunak – who appears to be trailing his opponent for the position, Liz Truss –was exceptionally explicit when he announced his plans for the Prevent programme involve a pivot towards “Islamist extremism” and those who “vilify” the United Kingdom.

Professor Fionnuala Ni Aolain, the UN special rapporteur on human rights in counterterrorism, has recently added her voice to those who denounce Prevent. The programme has been under review since 2019. However, it will never pre-empt terrorism, argues Manzoor-Khan, because it does not address the root causes of radicalization, such as disadvantaged socioeconomic conditions or institutional racism. Prevent, writes Manzoor-Khan in The Guardian, “actually undermines safeguarding and free speech.” Manzoor-Khan criticizes the conception of “the good Muslim” as someone who does not speak against racism, shows political conformity, and embraces capitalism. This, writes Manzoor-Khan, is deeply problematic because Islam “demands that we better the world.”[9]

The most original chapter in Tangled in Terror is probably the one devoted to secularism and Islamophobia. It is also a section of the book where Manzoor-Khan’s skillful combination of personal experience and general analysis shines the brightest. The author explains how secularism, contrary to what many people believe, does not imply the absence of biases and stereotypes. In fact, she argues, Western secularism was born in a context marked by the discredit of non-Western forms of knowledge and is “an extension of the colonial project.”[10]

Manzoor-Khan asks us to be aware of a historical paradox with current ramifications. In the heyday of Western imperialism in the late nineteenth and early twentieth centuries, Christianism was increasingly seen as belonging to the realm of private belief while simultaneously, it was presented as one of the constitutive elements of Western superiority over ‘the Other’, especially the Muslim ‘Other’.

Manzoor-Khan has experienced how, when she has been invited to speak in anti-racist circles, her Islam is often frowned upon. When non-religious anti-racist activists embrace secularism, they adopt its ‘othering’ of Islam, notes the author. Although secularism does not equate to anti-religious feelings, it is interesting to note that a polling study conducted by the University of Birmingham suggested that “hostility to religion is related to prejudice toward Islam.”[11]

“Tangled in Terror”, as announced at the beginning of the book, will make the reader uncomfortable. This is because it forces us to rethink long-held assumptions about what Islamophobia represents. The author delivers on her initial promise as the book convinces us that Islamophobia is far more than “just an experience of hate or prejudice.” Islamophobia has strong foundations. In “Tangled in Terror” we learn about these foundations so that we can move forward in countering them.

[2] Deepa Kumar, quoted in Tahir Abbas, “Book Review – Islamophobia and the Politics of Empire: Empire at Home and Abroad,” The International Journal of Press/Politics 19, no. 2 (2014): 268.