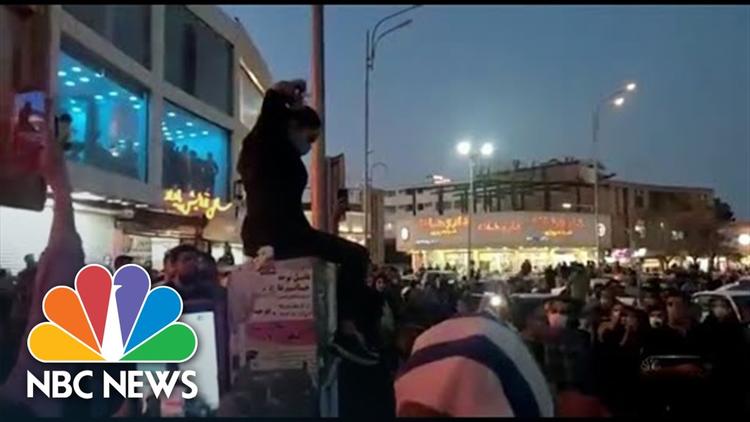 Ann Arbor (Informed Comment) – On Saturday, hard line Iranian President Ebrahim Raisi announced that his government would pull out the stops to crush the popular unrest sweeping the country that was sparked by the death in custody of Mahsa “Zhina” Amini, 22, a Kurdish young woman who was arrested by the morals police for wearing tight jeans. Protesters allege that she was beaten so badly that it led to her death. Hundreds of persons have been arrested, more than 700 in northern Iran alone.

The protests in Iran are not only about compulsory veiling but about compulsory everything. Veiling has become a symbol for the government’s determination to control the bodies and private lives of citizens. That determination is behind a Draconian law passed last fall that severely restricts access to abortion. If you can’t tell whether I’m talking about Iran or Texas, it is because both are in the grip of theocracies.

The theocratic government of Iran wants to control the bodies and personal lives of women, just as Republican lawmakers in the United States do, with their anti-abortion stance. The Republican Party has come to be so tightly intertwined with the evangelical Christian community of the Bible Belt that it is a theocratic party itself, similar in some ways to the Principalists or hard liners in Iran. Just as Iranian hard liners are hostile to democracy, fearful that the people cannot be trusted to vote for the theologically correct position, so US Republicans have increasingly turned against democracy. Evangelicals are only 17% of the US population now, and are rapidly shrinking, so the only way they can impose their religious precepts on the rest of the population is through minority rule– enabled by gerrymandering, voter suppression, and the legalization of dark money politics. The US wealthy for the most part have thrown in with the evangelicals to get tax breaks, since they can fly their wives to blue states or abroad for unwanted pregnancies and do not care what happens to the little people.

Just as Mahsa Amini was arrested by morals police in Iran, Brittney Poolaw and 1200 other women over the past fifteen years have been arrested in the United States for having a miscarriage, even where fetal failure to develop has been noted by medical examiners as a possible cause for the miscarriage.

Once the state legislates intervention in your body, you are not allowed to clothe it with tight jeans or to terminate an ectopic pregnancy without the state’s permission, even if that puts your life in danger. Once a political party becomes an instrument of theocracy, it feels a compulsion to impose its theology on everyone. In liberal (with a small ‘l’) political thought, which includes parliamentary conservatism, law is an expression of the majority of the elected representatives of the people. One can dislike a law, but a classic liberal must admit the validity of the law if it derived from that majority.

Theocracy is profoundly anti-liberal. Theocrats believe society must be governed in accordance with God’s will as they interpret it. Many theocrats are not clerics. Many of them wear tailored business suits. From a theocratic point of view, Roe v. Wade was illegitimate even though it was the ruling of a majority of a Supreme Court that had been appointed and voted in by the elected president and Senate. Roe was illegitimate despite being the law of the land because it violated God’s law, the theocrats said. They like to substitute themselves for “God.” Moreover, it had been rooted in a legal theory of the constitutional right to individual privacy, a theory that had itself to be razed to the ground if illiberal theocracy were going to prevail. Theocracy does not recognize a right to privacy, i.e., to individuals’ control over their bodies.

The office of Iran’s clerical leader operates under the theory of the “Guardianship of the Jurisprudent” (Velayat-e faqih). The origins of this ideology, adumbrated by Ayatollah Ruhollah Khomeini (d. 1989), lay in Shiite Muslim canon law concerning widows, orphans and other individuals in society who needed a male guardian but had no family member to serve in that capacity.

Earlier religious jurists had stipulated that a qualified cleric should step in to fill this role of guardian. Khomeini expanded this conception, arguing that the cleric is the guardian of all the state’s subjects. All of them, including free adult males, are by this theory wards of the state where clerics control the state. Ideally, the guardian would be a vicar of the Prophet Muhammad, but Twelver Shiites believe that the Prophet’s line ended with the Twelfth Imam, who went into occultation and would one day emerge to restore the world to justice. The return of the Twelfth Imam, the Mahdi, for Shiites is analogous to the Christian belief in the return of Christ.

Until that time, Khomeini argued, clerics should rule in the stead of the Twelfth Imam, since their study of the Qur’an and of the sayings and doings of the twelve Imams made it likely that they would do best at approximating the decisions he would take if he were present.

Likewise, more that 3/4s of Republican evangelicals want to declare the United States a “Christian” state, essentially repealing the First Amendment with its Establishment Cause. They want to control people’s bodies in the U.S., even if they have to do it undemocratically, just as the ayatollahs have the same goal in Iran. Iran has the Guardianship of the Jurisprudent. America’s Red States have the Guardianship of the Pastor and Priest. In neither case are we autonomous adults. We are wards of the state, reduced to being juveniles in custody.

Because of evangelical Republican rule of some US states, we already have elements of the Christian Republic of America, to mirror the Islamic Republic of Iran.