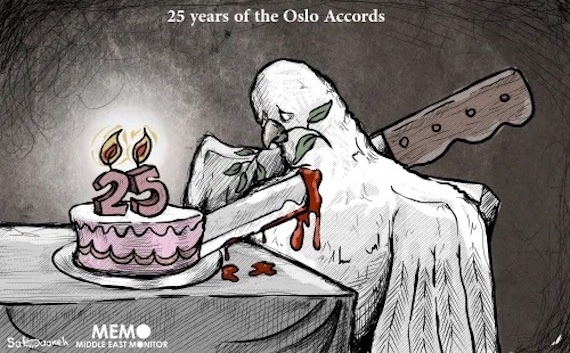 ( Middle East Monitor) – On 13 September, 1993, Israel and the Palestine Liberation Organisation signed the Oslo Accords, which set a historical precedent in Palestinian recognition of the occupation state, giving it a measure of legitimacy in a concession that Israelis had never imagined could happen. Not in their wildest dreams could they have thought that the day would come when the Palestinians, its rightful owners, would recognise Israel’s “entitlement” to their land and control over it.

Nearly three decades after its signing, it has become clear to Palestinians that the Oslo Accords will not lead to the end of the occupation and their right to self-determination. Far from it. The agreement has failed the Palestinians on every level — political, economic and social — while working in the interests of the occupation state. The people of Palestine now understand that their “representatives” are doing Israel’s dirty work by preventing legitimate Palestinian resistance activities, providing the occupation state with the opportunity to normalise relations with Arab countries.

Even Israelis know that this is the case. In fact, they knew from the very beginning that Oslo contained within itself the seeds of its own failure. The only remaining task is for it to maintain the security of Israel at the expense of the Palestinian people and their just cause.

Given the lack of a political horizon between the Palestinians and the Israelis, and the latter’s shift to the far right, it is obvious that Israel is trying to drop Oslo, even though it still relieves the occupation state of the economic and financial burden of taking care of Palestinian affairs. At the same time, it has kept the political issues and security in Israeli hands. Thanks to Oslo, it is a “Super Deluxe”, near cost-free occupation.

Allegations by Israeli right wingers that the Oslo Accords caused the death of thousands of Israelis lack objectivity and accuracy. Between the signing of the agreement and September 2000, the Fatah movement did not carry out any armed operations against Israel. Other factions, led by Hamas and Islamic Jihad did, however, particularly between September 1993 and February 1994.

Armed resistance operations included stabbings and shootings. This resistance phase was similar to the First Intifada from 1987 until the signing of the accords. Between 1990 and 1993, the West Bank and the Gaza Strip witnessed 9,323 armed attacks against Israel, at an average of seven operations a day; between 1993 and 1999, 4,216 attacks took place at an average of two per day.

These figures illustrate that the Oslo Accords caused Palestinian resistance operations to fall by 70 per cent, although they did not stop completely. The statistics also show a clear and dramatic decline in attacks since Oslo agreement, specifically since April 1996, when security coordination between the Palestinian Authority and Israel increased. Between 1997 and 1999, resistance attacks fell sharply to a rate of one per day.

Israelis admit that security coordination with the Palestinian Authority, which was one of the outcomes of the Oslo Accords, has thwarted most attempted resistance attacks. A simple comparison shows the importance of the Oslo Accords to Israel in terms of security: between 1987 and 1993, two hundred Israelis were killed; between 1993 and 2000 the figure was 288. Post-1997, when security coordination became stronger, the number of Israelis killed decreased significantly.

Between 1997 and 2000, fifty Israelis were killed by Palestinian armed operations, and from 1999 to 2000 only nine were killed. The average number of attacks between 1987 and 1993 was 289 a month, and between 1997 and 2000 the rate went down to 111 per month. The numbers speak for themselves. If the Oslo process had continued as planned, the number of attacks would’ve gone down to zero and the Second, Al-Aqsa, Intifada would not have started.

Right-wing Israeli claims that the conflict is being exacerbated by Oslo are simply another attempt to divert attention from the fact that it is the occupation, nothing else, that is at the root of the problem. It is thus ironic that those Israelis who attack the Oslo Accords are the people who gain the most from it. The agreement helped Israel to keep its illegal settlements in the occupied West Bank which was divided into areas A, B and C in order to help the settlers to create a reality on the ground that allows for annexation, with limited sovereignty in Palestinian villages and towns. Israel is indebted to whoever designed and drafted the Oslo Accords.

What reinforces this new Israeli approach as an alternative to the Oslo process is arguably the absence of any political will to engage in more useless negotiations with the Palestinians on the one hand, and the presence of an American administration indifferent to the Palestinian-Israeli conflict on the other. Moreover, it is now obvious that the Palestinian Authority is not representative of all Palestinians, due to the ongoing political split.

There is much that can be said about the negative impact of the Oslo Accords on the Palestinian national issue. The most dangerous thing is that it is being re-exported in dubious deals and agreements that go beyond the legitimate rights of Palestinians and extend instead to models of economic peace and quasi-autonomy. Thus, it is taking the people of occupied Palestine back to the time of regional and international tutelage by reproducing what is worse than Oslo.