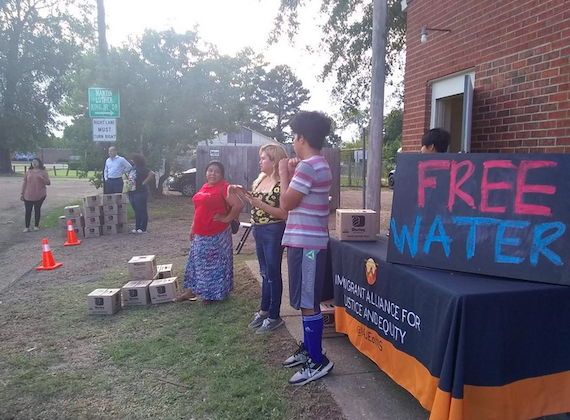 With 150,000 residents still lacking safe drinking water, grassroots organizations are scrambling to address a crisis decades in the making.

“We’re always on alert, and we’re always in the community,” said Efren Nuñez, an organizer with the Jackson-based Immigrant Alliance for Justice &amp; Equality, while distributing donations of drinking water in the city. “They call us right away when there’s an emergency.”

But lately, organizers have been focused primarily on getting water to community members, many of whom have struggled to find information and support on the crisis in Spanish.

“They’re not doing well, because there’s no water anywhere,” said Nuñez, who also noted that residents are still struggling with the impact of extreme flooding on their own homes. “They don’t have water to boil or cook, or bathe. Right now, we only have enough for drinking water. And, the schools are closed, so they’re also struggling to get to work.”

Yet, for organizers, the sudden emergency in Jackson has been building up for years, if not decades.

Officials and residents had long been aware of the issues and disruptions plaguing the city’s water treatment facilities, which include chronically low water pressure and dangerous levels of pollution. Yet, officials have been slow to make the necessary fixes in Jackson, which led to an acute crisis after major flooding last weekend disabled the city’s main water plant.

Advocates in the city have largely attributed the slow response to longstanding racial injustice and environmental racism, citing the fact that Jackson is over 82 percent Black — the result of decades of white flight that drove out white residents, and deeply crippled the city’s infrastructure. Nuñez also noted that the crisis has been amplified by political conflicts between the Democrat-led city, and the state’s Republican Gov. Tate Reeves.

Other local grassroots groups have also begun distributing water as part of a makeshift mutual aid effort, as residents struggle to cope with the crisis. The Mississippi Rapid Response Coalition, made up of over 30 organizations in the state, has been distributing bottled water daily in affected neighborhoods.

“It’s been chaos,” Sarah Stripp, managing director of the Jackson-based nonprofit Springboard to Opportunities, told the Washington Post. “There has been varying water pressure depending on where folks are in the city. It’s gone up and down in all the communities we work in. There’s been times it runs clear, times it runs brown.”

As for Nuñez, who lives in Jackson himself, there’s still access to water in his home. He attributes his luck to his neighborhood’s proximity to Jackson’s wealthier and whiter suburbs, whose water supplies have not been affected by the crisis.

“They had a similar situation where their treatment plants broke down, but they fixed it right away,” he said of the suburban water supply. “That’s the thing — they had the money. Jackson doesn’t have that.”

Sara Herschander is a freelance journalist and audio producer based in New York City. Her work has appeared in The American Prospect, Documented NY, and Univision, among other publications.