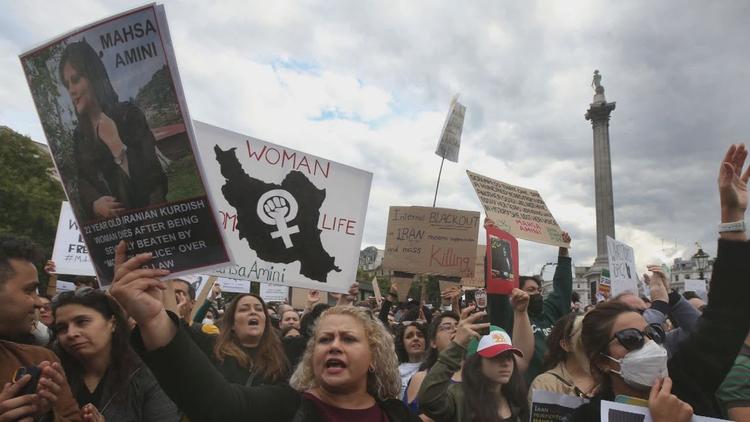 Ann Arbor (Informed Comment) – So far, the wave of street protests staged in dozens of Iran’s towns and cities appear to have been spontaneous and to lack organization or clear leadership. These demonstrations continued on Monday night in Sanandaj, Tehran, and some other cities, according to the Twitter feed of Iran Protests Watch. Although in many places that leaderless model may continue, since it has the benefit that the Iranian government cannot close the movement down by arresting the leaders, there are some signs that elements of Iranian civil society are getting involved. They are, moreover, making the serious charge against the state of dishonoring the nation’s young women.

The Coordinating Council of Iranian Educators’ Trade Union posted on Telegram a message that said, “in protest against the widespread repression of popular protests, the garrisoning of some schools and the arrest of students and street protesters,” it is “calling on teachers and students to boycott classes on Monday, October 4 and Wednesday, October 6.” (H/t BBC Monitoring).

This is also a sign that the protests are now fueled not just by the death in custody of the young Kurdish woman, Mahsa “Zhina” Amini, 22, a week and a half ago, but that the regime’s attempt to crack down on the demonstrators is now itself driving further protests. Dozens of people have been killed, each a martyr to the movement.

The teachers point out the contradiction in the Iranian government’s allegation that the morality police would never exercise brutality against a prisoner as they are accused of doing to Mahsa Amini, and the deployment by those same regime enforcers of lethal force against the youth who are protesting Mahsa’s death.

As for their complaint about the “garrisoning” of schools and universities, the teachers union officials explained that “some of the country’s schools have been turned into military bases to suppress the protesters.” They say that many of the youth that have been arrested (some 1300 arrests are said to have been made) are high school students or recently graduated high schoolers on their way to university this fall. They also complain that these young prisoners, including young women, it is implied, are being put in solitary confinement.

The teachers celebrated the way Mahsa Amini’s death had brought various social strata of the country together to object to forced veiling, which they maintained was not even firmly grounded in Islamic religious precepts. They said it is expected that “the brave girls of our land” will insist on their intrinsic right not to veil if they do not want to, and confidently asserted that the “wave of national support for protesting the murder of #Mehsa_Amini proved that no one will dare to ignore the girls of this land and treat them inhumanely.”

This emphasis on the mistreatment of the nation’s young women, and the dishonoring of them by a state that disrespects their rights, reminds me of my friend and colleague Afsaneh Najmabadi’s book The Daughters of Quchan. The Harvard historian argued that the 1905-1911 Constitutional Revolution was kicked off, in ways that later (male) historians gradually downplayed or forgot, by widespread public anger over the plight of Iranian girls in the villages of Khurasan or eastern Iran.

In the early twentieth century, many of the Turkmen people of northeastern Iran (abutting what is today the country of Turkmenistan), still pursued a pastoralist or semi-nomadic style of life. Some of them would swoop down on settled villagers to raid their grain stores or steal their livestock. While they were at it, they would sometimes carry off young women from the villages, and would sell them in the slave markets of Bukhara in what is today Uzbekistan. The enslaved young women would become housemaids to wealthy Sunni families in Bukhara, but were also likely viewed by their masters as concubines to which they had legitimate sexual access.

I should underline that most pastoralists and settled villagers had relatively beneficial mutual relations of trade. Occasionally, however, the former would launch such raids.

The girls kidnapped by pastoralists from the town of Quchan in this way became a cause celebre. Since it was felt that the Qajar shah or king was not doing enough to get them back and to stop the trafficking in and dishonoring of these girls of the Iranian nation. the discontents boiled over into protests that kicked off Iran’s first modern revolution, in which the demand was for a constitutional monarchy and a rule of law.

So the theme that protesters are now hitting on, that the clerical government of Iran is dishonoring the young women of the nation, is extremely powerful, and there is a precedent for it leading to a great deal of turmoil.