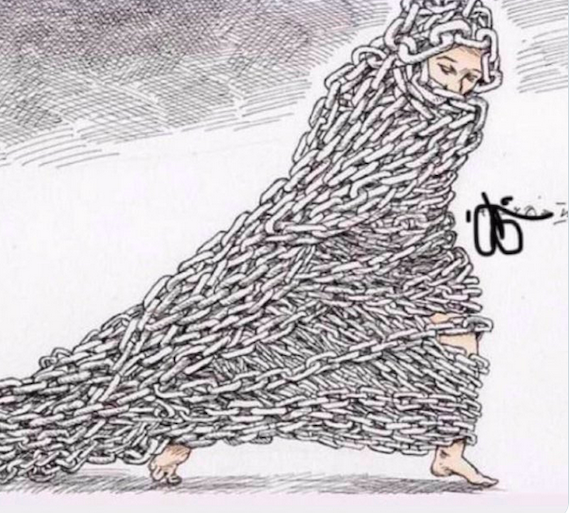 Ann Arbor (Informed Comment) – On Tuesday Iran saw a fourth day of protests kicked off by the death in custody last week of Mahsa “Zhina” Amini, 22, a Kurdish young woman visiting Tehran who was arrested for imperfect veiling. Her father said her corpse showed bruising on her legs. Some women have burned their veils in protest. College campuses around the country have seen unrest, but also civil spaces in thirteen cities around the country. Hackers claimed to have gotten hold of her hospital x-rays, showing skull fractures.

The biggest protests have been in Kurdish cities and towns such as Saghez, Amini’s home town, and Sanandaj. Security forces are alleged to have killed 3 protesters so far, and to have jailed hundreds. Social media videos show crowds chanting against Iran’s clerical leader, Ali Khamenei, and even attacking members of pro-state paramilitaries such as the Basij. Some crowds chant, “Whoever kills my sister, I will kill him!”

State organs and officials are blaming the demonstrations on foreign covert operations and denying that Amini was beaten by police while in custody. Iran’s hard line president has called for an investigation into her death.

The protests have several dimensions. Since Amini was Kurdish, she has become a symbol for Iranian Kurds who want looser rule of their western regions by Persian Tehran. Most Kurds are Sunnis, Sufis or secularists, whereas Iran’s government is a Shiite theocracy. Some Kurdish women are arguing that the kind of veiling practiced by the Islamic Republic of Iran is foreign to Kurdish folkways. It is certainly true that in the nineteenth century many Kurds were farmers or pastoralists, and that female field workers did not have the luxury of veiling, while women pastoral nomads rode horses and went bareheaded. Some Kurdish women are vowing never to wear a veil again.

There are many reasons for which many Muslim women prefer to veil. Some are convinced that veiling is required by Islamic law and is necessary for piety. This conviction, however, is new in many countries. When I lived in India and Pakistan in the early 1980s, it was very uncommon for women to wear a head covering. They wore a scarf over their shoulders and put it up over their heads at prayer time, e.g. For others, veiling is a way for them to carry their privacy with them when out of the home, so that they are not sexually harassed in the street or on public transportation by young men. For those who have jobs, it signals to male co-workers that they are not available, and it is dangerous for a man to harass a veiled woman because other Muslim men will defend her virtue. Some women do not like being objectified and commodified in the way of modern capitalism. There are practical issues. The Middle East is dusty, and veils can be a defense against that discomfort.

At the same time, veils are often political in the Middle East. In countries with pro-American, relatively secular regimes like the military junta in Egypt, many dissident women over the past fifty years have begun veiling. When I first went to Egypt in 1974 I would estimate that 5% of urban women wore a head covering. Now almost everyone does except Coptic Christians. But in countries with hard line Muslim religious policies, we see the opposite tendency, of women desiring to throw off the veil.

Amini has also become a martyr to restive youth in Iran who resent constraints on their personal liberties. Youth discontent seems to erupt every decade at the teeming Iranian universities, where the student body now has a female majority– the late 1990s, 2009, and now 2022. On Monday there were campus protests in Tehran, Karaj, Isfahan, Yazd, and Tabriz, according to BBC Monitoring. On Tuesday, a crowd of protesters in Kerman intervened to free one of their own who had been arrested by policy.

Finally, Amini is now a feminist symbol. Iranian women had already staged protests against their exclusion from the audience for sports events, and more recently against compulsory veiling. Middle and upper class Iranian women did not veil in the 1970s, but the practice was imposed on them by the Khomeini government once it came to power. In some ways it is the revenge of small-town and rural Iran on the urban population. Women’s veiling was probably adopted into medieval Islam from Byzantine and Sasanian Iranian upper-class customs around noblewomen. Contemporary veils favored by the ayatollahs are influenced by customs of rural Iraq and the Gulf. In Kerman, it is alleged that a woman sat on a utility box and cut her hair in public while a crowd sang “death to the dictator.” Women gathered in city centers to unveil and cut off their hair in public.

In Sari, in the northern Mazandaran province, it is alleged that women gathered to set their veils on fire. Elsewhere, women have just been gathering to walk in the streets bareheaded.

Truly successful protest movements over the past century and a half in Iran have depended on an alliance of the merchant class, modern intellectuals, and the clergy. So far these rallies only have one of the three key ingredients. Iranian society is dynamic and fluid, however, and new winning coalitions could emerge.