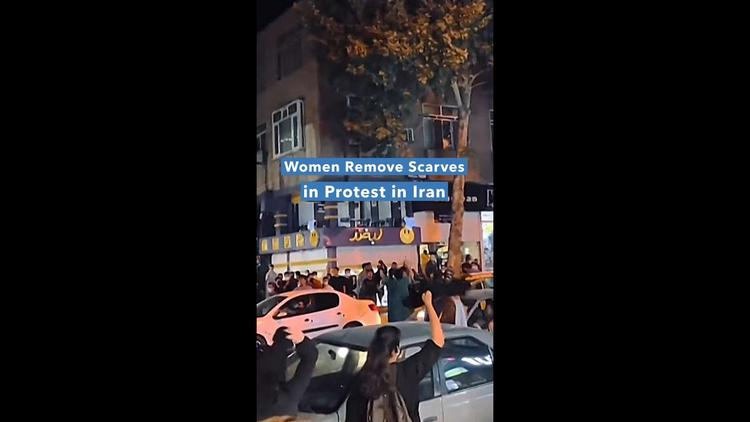 By Mohammad Zarghami and Golnaz Esfandiari | –

( RFE/RL ) – Just days after expressing support for the protests in Iran, Faezeh Hashemi, the outspoken daughter of former President Akbar Hashemi Rafsanjani, was arrested in the Iranian capital on unknown charges.

The hard-line Tasnim news agency, which is affiliated with the Islamic Revolutionary Guards Corps (IRGC), reported on September 27 that Hashemi was arrested by security forces in east Tehran for “inciting riots,” but added that the alleged provocations failed to being people onto the streets.

Before her arrest, Hashemi had said that authorities refer to the protests that have rocked the Islamic republic for the past 12 days as “riots” and “sedition” in order to suppress them.

“What [authorities] want to convey is that these are not protests, they’re riots, but in fact they are protests,” Hashemi said in an audio recording obtained by RFE/RL’s Radio Farda.

“Those who have seen the protests know that, for example, if the youth set fire to garbage cans, it’s because the [security forces] have used tear gas and they want to neutralize it; or when they beat a member of the security forces it’s because they have been attacked and they’re defending themselves,” she said in the recording.

Hashemi said most of the protesters are young people who have been demanding rights in connection with “the issue of the hijab and the [establishment’s] Taliban-like view of women’s and social issues.”

“It shows that our youth want a future, they want to have a life. They’re not trying to bring the regime down, although it can go that way,” she added.

The protests across Iran were triggered by the death of 22-year-old Mahsa Amini on September 16 following her arrest by Tehran’s morality police for alleged “unsuitable attire.” Protesters have demanded women’s rights be respected while also calling for an end to the Islamic republic. Iranian security forces have responded with force, killing dozens of protesters and arresting several hundred. Officials have also imposed tough restrictions on the Internet.

On the audio file obtained by Radio Farda earlier this week, Hashemi said the demands raised in the current protests are different from recent demonstrations that have focused on the deteriorating economy, which has been crushed by crippling U.S. sanctions.

“For the past few years, demonstrators have raised demands in relation to [the economy] and their jobs, resulting in the belief that the people do not care about politics anymore. But the [current] protests show that impression was wrong,” she said.

“These demands have always existed and they will remain. The younger generation is naturally alienated with the slogans and aims of the [Islamic] revolution.”

Hashemi, a former lawmaker and women’s rights advocate whose father was one of the founding fathers of the clerical establishment, said the hijab, or head scarf, which became compulsory following the 1979 Islamic Revolution was not supposed to be forced upon women.

She said the clerical establishment has “deviated” from its path, becoming “a dictatorship” that is fighting for its survival.

“They’re committing so many injustices only to stay in power,” she said.

Hashemi also noted that the establishment is unlikely to agree to meaningful reforms, including “free elections,” adding that Iranian society has “lost hope in reforms.”

She has also blamed Iranian authorities and their “incorrect” policies that have led to the U.S. sanctions that have made life for ordinary Iranians very difficult.

In 2016, she came under attack by hard-liners for meeting with a leader of Iran’s long-persecuted Baha’i community with whom she used to share a cell in Tehran’s notorious Evin prison.

The meeting was described by powerful clerics as “despicable” and against norms amid calls for her prosecution. She later said in an interview that she didn’t regret the meeting.

Hashemi has been arrested and jailed several times in the past, including briefly in the 2009 crackdown on mass protests over the disputed presidential vote in which widescale corruption was alleged by the opposition.

In 2012, she was given a six-month jail term for “spreading propaganda against the system.”

In July, she was charged with “spreading propaganda” against the country and blasphemy in social-media comments, the Judiciary said.

Hashemi was reported to have said that Iran’s demand for the IRGC to be removed from the U.S. State Department list of foreign terrorist organizations was “damaging” to the country’s “national interests.”

She had reportedly also called Khadija, a wife of the Prophet Muhammad, a “businesswoman” whose earnings were spent by Muhammad, showing that women can also engage in economic activity. She later apologized for those comments, saying they were not intended to insult anyone.

Hashemi’s arrest followed the detention of dozens of activists as well as at least 20 journalists and four lawyers for their alleged part in the anti-hijab protests.

Authorities have also warned the many celebrities and sports stars who have backed the protests.

Mohammad Zarghami is a senior journalist and anchor at RFE/RL’s Radio Farda who reported from Tehran before moving to Prague. He focuses on Iran’s politics and social issues. Zarghami has conducted dozens of interviews with prominent Iranian and international public figures.

Golnaz Esfandiari is a senior correspondent for RFE/RL focusing on Iran. She has reported from Afghanistan and Haiti and is one of the authors of The Farda Briefing newsletter. Her work has been cited by The New Yorker, The New York Times, The Washington Post, and other major publications. Born and raised in Tehran, she is fluent in Persian, French, English, and Czech.