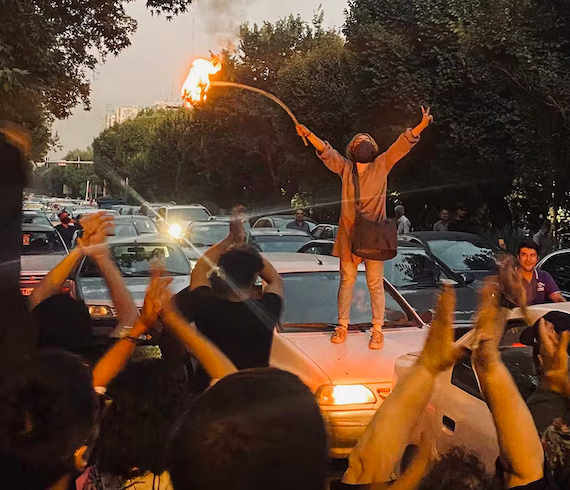 (The Conversation) – A young woman’s death in custody in Iran on September 16 has sparked nationwide protests. Mahsa Amini’s fatal injuries resulted from an arrest and beating by the country’s hijab police, which enforces the mandatory and “correct” way of wearing the hijab. The protesters have caught the world’s attention by chanting what sounds like a revolutionary slogan: “zan, zendegi, azadi” (woman, life, freedom). Other slogans target the regime: “An Islamic Republic, we don’t want, we don’t want.”

Despite the scale of recurring protests in Iran, some people still cast doubt on the idea that these events have mass support in this vast and populous country. So, how extensive is Iranians’ discontent with the mandatory hijab and the regime that imposed it after the 1979 Islamic Revolution?

Between 2019 and 2022, we at GAMAAN – Group for Analysing and Measuring Attitudes in Iran – conducted innovative online surveys that ensured anonymity to potentially fearful respondents. The process has been a cat-and-mouse game, with the regime blocking a major survey application in Iran and targeting at least one of our surveys with bots, not to mention the challenge of gathering data from pro-regime respondents.

Iranian women have taken to burning hijabs in protest at the death of Mahsa Amini.

Our surveys went viral, resulting in raw samples ranging from 20,000 to more than 100,000 respondents. After weighting the data for five demographic variables and one political variable, we could replicate external data such as employment rates, household income distribution levels, and the languages people spoke at home.

Moreover, we found a match between our data and other institutes’ data (gathered through conventional survey methods) for politically non-sensitive questions, while also finding a large discrepancy on politically sensitive topics such as religion (see the tables in the 2020 survey report on religion, the 2021 report on international relations, and the 2022 report on political systems). The success of these tests indicates, to put it simply, that our survey results show what Iranians of all social layers, including people who support the regime, really think.

Our 2020 religion survey confirmed that a secular shift is taking place in Iran. While more than 90% of respondents said they had been raised in a believing and/or practising religious family, around half indicated they had become non-religious in their lifetime. Meanwhile 72% explicitly opposed the mandatory hijab.

When we broke down the data, we found – as we expected – that women, the youngest generation and university-educated people living in cities were the groups most opposed to the mandatory hijab. We also found that the majority of men, people living in rural areas, people over the age of 50, and those without higher education opposed the mandatory hijab. This opposition is, then, indeed nationwide.

Conflicts over the mandatory hijab were divided primarily along political and religious lines. Around half of those who said they believed in the practice of wearing the hijab for religious reasons were also explicitly in favour of using state power to enforce it, while only around a quarter explicitly rejected enforcement.

Iranian women who identify as practising Muslims have also expressed anguish over the arbitrary and extreme violence committed by the Islamic Republic against women. While some try to maintain a delicate balance between religious belief and politics, many will continue to abandon religion altogether. The latter do not only criticise the Islamic government but also Islamic ideals of piety in themselves: while 23% of the target population affirmed the religious role the hijab played for them in 2020, 57% said they did not have a religious belief in wearing the headscarf.

These secular attitudes help explain why women are publicly burning the hijab and chanting against the very idea of an Islamic regime. For them, the mandatory hijab is the Islamic Republic’s Berlin Wall.

This is backed up by our 2022 survey on political systems, which showed that about 67% of the target population of literate adults are against a political system governed by religious law. Again, women, the youngest generation, and university-educated people living in cities are the groups most opposed to the idea of an Islamic regime. The highest level of support for an Islamic regime, at 35%, was expressed by people living in rural areas.

Our longitudinal data on another question about political orientations indicates that about 63% of the population are proponents of either regime change or some sort of transition from the Islamic Republic. Only 8% supported “reforms” within the framework of the Islamic Republic.

Given these numbers, it shouldn’t surprise commentators that among the most heard chants all over the country are calls for the Islamic Republic to be brought down. The videos that ordinary Iranians are desperately trying to show to the world are thus reflective of the social reality in the country. The facts are that the majority opposes the compulsory hijab and that people of all social layers do not want an Islamic Republic.