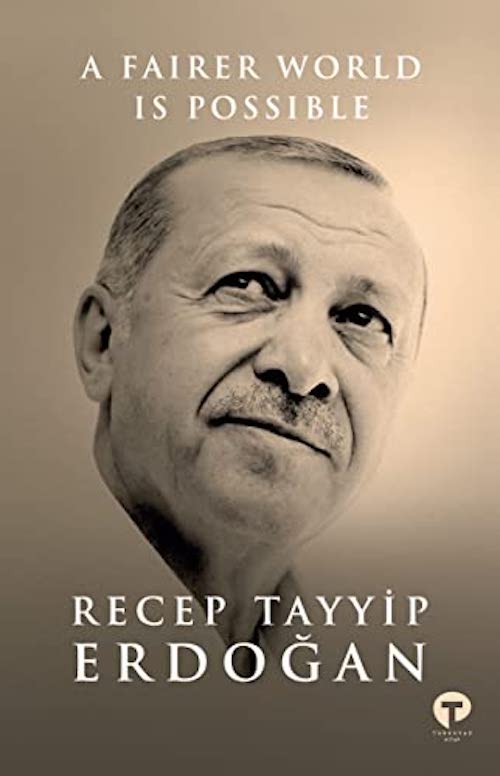 Mt. Berry, Ga. (Special to Informed Comment) – I avoid reading books written by politicians. They are all too often nothing more than exercises in annoying self-promotion disguised in improbably high-minded language. Yet circumstance tempted me beyond the powers of resistance to buy a copy of Turkish President Recep Tayyip Erdoğan’s 2021 book A Fairer World Is Possible: A Proposed Model for a United Nations Reform in the Istanbul Airport this summer. During the semi-chaos of disembarking after a 13-hour flight – my wife Jane and I pulling luggage, carrying our two sleepy preschool princesses, and helping a frazzled Russian mother and grandmother who also had children in tow retrieve their carry-ons from the overhead – my half-read copy of John J. Mearsheimer’s 2018 The Great Delusion vanished into the seat-back pocket, and thence on to whatever Turkish Airlines does with such items. With our other books in checked through baggage, I was left effectively bookless during the layover before our flight to Athens. Fellow bibliophiles will know that possession of a good book can be as a coping mechanism. Thus, a suspiciously inexpensive copy of the very intensely promoted A Fairer World Is Possible was purchased. What with being reunited with our other hoard of books, marching preschool princesses up and down the Acropolis and keeping them focused during the Big Skinny Greek Wedding, etc. A Fairer World sat only half-read until the beginning of Fall Semester. But finish it I did.

Here is what I learned: Erdoğan’s cognitive style is decidedly more hedgehog than fox. Recall Archilochus’s adage that, “The fox knows many things, but the hedgehog knows one big thing.” We are divided between generalists with many tools or solutions and specialists with one tool or solution. With A Fairer World Is Possible, Erdoğan does a splendid job of explaining exactly what is wrong the United Nations Security Council.

Although its permanent membership and veto powers of the Security Council might have made sense in the aftermath of the Second World War, that membership is now a poor reflection of relative power in the world and has reduced the United Nations to ineffectiveness and threatens its irrelevance. He is correct that the repeated exercise of the veto by the United States to defend Israeli impunity is a disaster.

Alas, Erdoğan’s analysis fails to offer a workable re-engineering of decision-making in the United Nations. He proposes to replace the veto of the five permanent members of the Security Council with supermajority voting in the General Assembly. Although vague on this point, he appears to propose selecting the Security Council through an auction of states willing to fund the United Nations.

The obvious problem with the supermajority component is that state sovereignty and UN membership may reflect relative power in the world even more poorly than the permanent membership of the Security Council. Barbados, Malta and Nauru would have the same voting power as the United States, Russia and China. Although liberal societies must be governed via the legal equality of individual citizens, the international system probably cannot be governed as legally equal sovereign states. Rather than vie with one another financially for a seat on a powerless Security Council, the great powers would rationally ignore the United Nations. The world’s quasi-parliament is already an almost useless talking shop. Erdoğan’s reform would reduce it to complete irrelevance.

A workable fix would be a new nine-member Security Council reflecting relative economic and military strength together with population and territory size: representatives from China, India, United States, Indonesia, Japan, European Union, African Union, Organization of American States and Arab League. States would be denied multiple representatives or voting in multiple bodies to elect representatives. Rather than the permanent member veto, Security Council decisions would be taken by Qualified Majority Voting, akin to that used in the Council of the European Union.

There are other obvious, predictable holes in A Fairer World Is Possible. Although the author returns repeatedly to important humanitarian concerns about the Palestinians, the Rohingya and Syrian refugees together with security concerns about terrorism, climate change is barely mentioned, nothing is said about historical responsibility for the ethnic cleansing and genocide of Armenians, Greeks and Assyrian Christians. Forget Kurdish self-determination. Also notably missing is any discussion of the maritime geopolitics of the Eastern Mediterranean.

Given the flaws in the proposed reform of United Nations decision-making and silence about multiple unmentioned issues, A Fairer World Is Possible is an ironic title. Perhaps readers should be grateful that it was not A Fair World Is Possible.