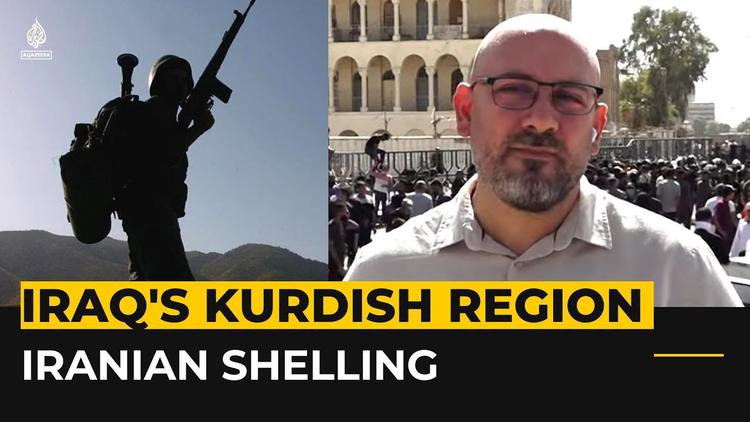 Ann Arbor (Informed Comment) – The Iranian Revolutionary Guards Corps on Wednesday targeted Iranian Kurdish expatriate political and paramilitary groups in the Kurdistan Regional Government of Iraq for drone strikes, killing over a dozen people and wounding more than fifty. So reports Patrick Wintour at the Guardian. This is not the first time Iran has bombarded these expatriate Kurdish groups based over the border in Iraq. The attacks, however, do come at a delicate time for Kurdish-Iranian relations.

The Komala Kurdistan Party of Sulaymaniya in Iraq was targeted by drones. The Kurdistan Freedom Party was hit near Erbil, the capital of Iraqi Kurdistan.

Al Jazeera reports that the Iraqi government of caretaker Prime Minister Mustafa al-Kadhim will summon the Iranian ambassador in Iraq to explain his country’s actions. The regional confederacy, the Kurdistan Regional Government complained that the Iranian drone attacks were a violation of the sovereignty of Iraqi Kurdistan.

The protests sweeping Iran for nearly two weeks now have been impelled by several motivations. Some have been led by women decrying forced veiling and other patriarchal practices aimed by Iran’s clerical elite at keeping women in their place, a place decidedly inferior to that of men. Others have been youth revolts against the policing of the bodies and thoughts of young people. Some have likely been economic in character, a reprisal of the protests against high prices for fuel and other key commodities we saw 18 months ago. But what distinguishes this round of rallies from those of 2019-2020 is the ethnic component, with protests sweeping Kurdish towns and cities. The young woman whose death in custody sparked the nationwide unrest, Mahsa “Zhina” Amini, was from Saqqez in Iranian Kurdistan, and Kurdish cities in Iran have been major sites of demonstrations.

Kurds make up some ten percent of Iran’s 86 million citizens, coming to about 8 to 9 million. They live in the mountainous west of Iran, and a majority are Sunni Muslims, unlike the Shiite Persians. They have some exiled political parties and paramilitaries that pressed for semi-autonomy in Iranian Kurdistan and were so pressured that they felt that they had to leave the country. The Kurdistan Democratic Party of Iran (KDPI) was one of the targeted groups. Iranian Kurds want more autonomy from the Iranian state, though they probably know that independence is a pipe dream.

Kurds speak one of three major dialects, which are not mutually comprehensible, and live scattered among 5 states of the greater Middle East. The governments of Turkey, Syria, Iraq and Iran all see Kurdish nationalism as a dire threat to their countries, because if the Kurds seceded they would often take with them key economic resources.

The Kurdistan Regional Government is a unified Kurdish administration of Erbil, Sulaymaniya and Dohuk provinces of Iraq. Although it is led by the relatively conservative Kurdistan Democratic Party, the KRG has attracted expatriate Kurdish activists from Turkey and Iran, causing bad relations Between Erbil and Ankara. Turkish F-16s have done bombing raids on Kurdistan Workers Party (PKK) guerrillas in the mountains of the Qandil region, and there have even been incursions into Iraq by Turkish troops to attack the PKK in reprisal for PKK attacks on Turkish personnel in eastern Anatolia. So Iran’s drone attacks on expatriate Kurdish groups in Iraq has a Turkish precedent.

Ultimately the drone attacks are a red herring, an attempt by the hard line government of President Ebrahim Raisi to depict the unrest in Iranian cities as the work of Kurdish saboteurs and “terrorists.”

The KDPI did not kick off the demonstrations in Iran. The country’s morality police did that when they allegedly beat Ms. Amini to within an inch of her life.