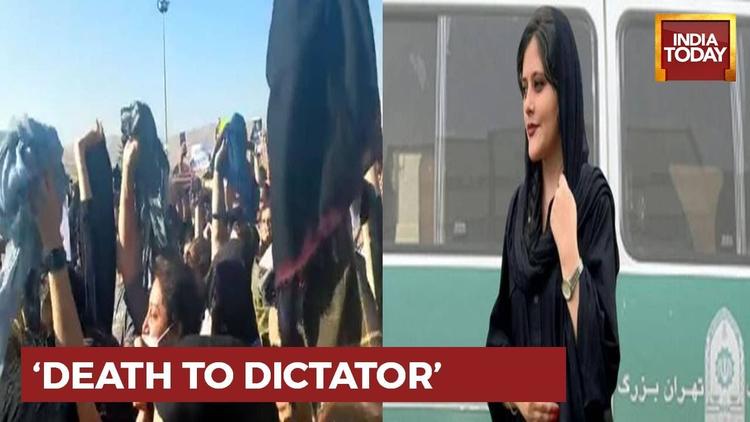 Ann Arbor (Informed Comment) – On Saturday, 13 protesters were wounded when security forces opened fire on them outside the house of the governor in Saghez, Iranian Kurdistan. This, according to the Hengaw human rights organization. The demonstrators were expressing their fury over the death in police custody of Mahsa “Zhina” Amini, 22, a Kurdish young woman who was visiting the capital, Tehran, with her parents when she was arrested by the religious police for not completely covering her hair with her headscarf. Having locks of hair peak out over the forehead is referred to by Iran’s Shiite hardliners as “bad veiling” (bad-hejabi), and is a crime. Popular protests among activist women against the veiling requirement in recent years have caused Iran’s theocratic government to crack down on women more fiercely than ever before.

Protesters gathered outside Kesra Hospital in Tehran where Ms. Amini was taken (though we now know she was pronounced dead on arrival). They chanted anti-government slogans, such as “From Kordestan to Tehran, women are oppressed” and some women unveiled.

These scenes were repeated at Ms. Amini’s funeral itself, where hundreds of mourners gathered and some shouted slogans such as “Death to the dictatorship!” against the Islamic Republic and its leader, Ayatollah Ali Khamenei. Women tore off their headscarves and held them up to the sky while chanting, according to Firaz Dağ at the Germany-based Kurdish web site, Nûçe Ciwan .

The controversy is multi-faceted, since it concerns women’s rights but also the rights of the Kurdish minority of mountainous western Iran. There are about 6,730,000 Kurds in Iran, about 8% of the population. Kurds are majority Sunni and many are Sufis, and they have often chafed under Shiite Iranian rule. At some points in recent years police in the province have detained dozens of Sunni religious activists in Kurdistan.

At Ms. Amini’s funeral, her grandfather read from the Kurdish poet Shirku Bikas a poem entitled “Tehran does not laugh for Anyone.” He concluded, “We will not fall short, we will not kowtow.”

Although protesters insisted that Ms. Amini had been beaten or tortured, Tehran police said she died of a heart attack while in a waiting area and showed video of Ms. Amini speaking to a police official and then returning to her chair, when she collapsed. Iran’s hard line president, Ebrahim Raisi, has called for an inquiry into her death.

As a social historian, I would just observe that women in their twenties are the healthiest group in any human population, so that they are far more likely to die of accidents, homicide or suicide than from any medical condition. The Tehran medical examiner has said that he should have autopsy results in three weeks. My guess is that Ms. Amini was beaten on the head, which caused a traumatic brain injury and bleeding in the brain or caused a brain aneurysm. That would explain her abrupt collapse. The likelihood that she had a heart attack is virtually nil unless she had a congenital condition from birth, which her parents deny.

Al Jazeera English reports that “the reformist Etemad Melli political party urged Iran’s parliament to cancel the law on the mandatory hijab and suggested President Ebrahim Raisi do away with the morality police.”

It remains to be seen whether the incident has a long-term effect on Iran’s often vital women’s movement, which constantly struggles against religiously-backed male chauvinism and misogyny.