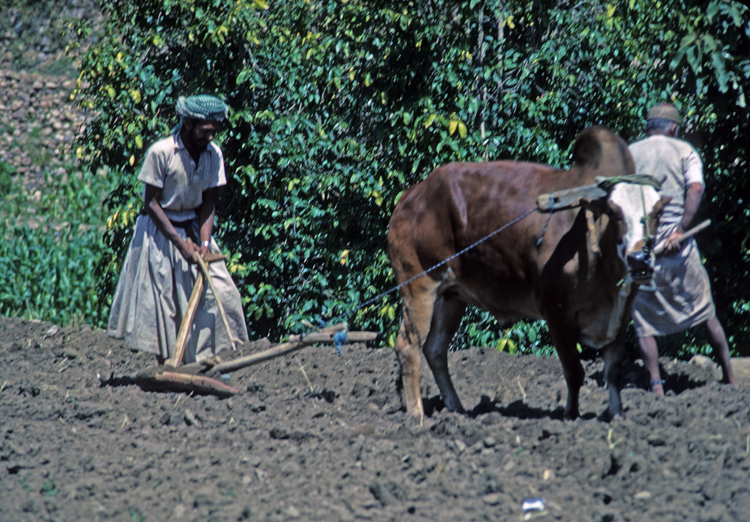 ( Tabsir.net ) – The early major civilizations in the Middle East and Asia with their head start several millennia ago had one thing in common: an agricultural base that fed not only people but led to development of states and their services. Major river systems like the Nile and Tigris/ Euphrates, the Ganges of India and the Yellow of China were important centers for mass production, but at the same time small-scale farmers utilized a variety of water sources or practiced dry farming in a variety of ecozones across continents. Although there were periodic famines due to climate variability or political violence, until the start of the last century many countries were able to grow most of the food needed for their citizens and several were major exporters. In 1798 Parson Thomas Malthus, an economist in his day, suggested that humanity faced a major food crisis. At that time the world population was around one billion; today it is closing in on eight billion. Malthus argued that population growth, if unchecked, grew at a geometric rate over time, but food production increased only arithmetically; thus it was inevitable that there would be food shortages, especially for the poor.

At the time Malthus was unaware of later advances in agricultural technology, but his warning still serves a purpose. There needs to be a way to ensure that any form of food production is sustainable. The so-called “Green Revolution” that prophesied major dams and irrigation schemes as the wave of the future, has indeed been a wave, but far more destructive to the environment and local agricultural traditions than anticipated. If we are to recalibrate the model of Malthus today, it is less a mathematical issue than a bureaucratic one fueled by monopolistic profit making. In the United States about half of all family-owned farms are considered small-scale, but they generate only 21% of production. There has been a general decline in the number of farms in the U.S. from a high of 6.8 million in 1935 to about 2 million in 2021. The problem is even grimmer outside the industrialized West, where overall crop diversity has declined by 75% in a century, in large part due to the domination of commercial seeds, fertilizers and pesticides. Not surprisingly the need for food aid has grown in recent years. The case of Yemen has become a poster child for food aid since the humanitarian crisis began in a war that started in 2015. As noted by the World Food Program

The current level of hunger in Yemen is unprecedented and is causing severe hardship for millions of people. Despite ongoing humanitarian assistance, 17.4 million Yemenis are food insecure. The number of food insecure people is projected to go up to 19 million by December 2022.
The rate of child malnutrition is one of the highest in the world and the nutrition situation continues to deteriorate. A recent survey showed that almost one third of families have gaps in their diets, and hardly ever consume foods like pulses, vegetables, fruit, dairy products or meat. Malnutrition rates among women and children in Yemen remain among the highest in the world, with 1.3 million pregnant or breastfeeding women and 2.2 million children under 5 requiring treatment for acute malnutrition.

Historically, the rich and fertile land of Yemen, stemming back three millennia to the ancient kingdom of Sheba (Saba), was the bread basket of Arabia. During the 13th century, for example, Yemen boasted diverse crop production from the hot and dry Red Sea Coast to cultivated mountain terraces at the highest point on the Arabian Peninsula. One of the ruling sultans, al-Malik al-Ashraf Umar, interviewed local farmers and wrote a major treatise of the agriculture practiced in Yemen in his time. There were, of course, periodic famines, but overall Yemeni farmers were able to feed themselves and export grain north to Mecca. After the civil war in the 1960s toppled the long-lasting Zaydi imamate, the resulting republic in Yemen’s north received major development aid for improvement of agriculture, but most of this had limited impact at the local level. As the population grew, from less than seven million in 1976 to now reaching 30 million, and unregulated drilling of tubewells drew down aquifers drastically, food production has declined precipitously. There is still fertile land and Yemen’s limited water resources can be used in a sustainable manner, but the ongoing war has ground the economy to a virtual halt. Farmers are still growing food, but it is not clear how much. The fact remains that without imported food aid, there would be a massive famine.

While there is little choice not to send massive amounts of food aid to Yemen to meet the emergency, there is also an urgent need to revitalize the rich agricultural production systems of Yemen, many of which rely on dry farming techniques developed over centuries. Current violent conflict makes such an emphasis difficult, but there are opportunities to work with local Yemeni communities and NGOs. The need is not for foreign technical know-how, an approach that has been ineffective and a waste of funding, but to assist Yemenis in rebuilding terrace walls and using their own seeds, especially for food crops like sorghum which grow well at most elevations. Without contributing to Yemen’s food sovereignty, the ability of Yemeni farmers to grow their own food in harmony with the environmental constraints and not overly dependent on foreign inputs, food aid is a bandage on a gaping wound.

One of the main contributors to the decline in traditional varieties of seeds and crops around the world is the corporate monstrosity previously known as Monsanto. Fortunately, Monsanto with its GMO push never made inroads in Yemen, but the results have been negative elsewhere. The destruction from its pesticides and control of seeds has been known for over two decades. The negative impact has been especially hard in India, which the film Bitter Seeds explores. By pushing GMO seeds, especially cotton, that turned out to be problematic and an economic burden, farmers were locked into dependence on imported seeds and this led to a decline in the local seed varieties, many of which were well suited to local environments after centuries of use. The fact that major aid donors such as the World Bank have pushed GMO seeds despite the enormous economic and bureaucratic burdens these impose on developing nations, has reduced rather than aided food production, especially given the focus on cotton. Regardless of the negative health impact of GMO foods, the overriding issue is saddling local small-scale farmers worldwide with expensive, imported production needs and has devastated locally adapted crop varieties.

Anthropologist Joeva Sean Rock has just published an ethnographic study entitled We are not Starving: The Struggle for Food Sovereignty in Ghana. He shows that despite the promise of improved cotton varieties, the results were far less promising and actually disrupted local food production, which has been predominantly small-holder. In addition, by talking to Ghanian farmers and activists, he realized that the food aid providers started with the assumption that local farmers did not know how best to farm and they needed foreign assistance or they would starve. Instead of working with farmers to build on their knowledge honed over centuries through all kinds of climate change, they simply presented an unsustainable package deal with strings attached from the outside.

The lesson for the future of Yemen’s agriculture is obvious. Yemeni farmers have been successful in small-scale food production for centuries. While no one is proposing going back to reliance on simple scratch plows and animal labor as a permanent solution, the old systems can be built on and updated with appropriate changes. A major proponent of responsible change is the Yemeni NGO YASAD, the Yemeni Association for Sustainable Agricultural Development, the activities of which have been curtailed as the Yemen war wages on. Food aid must continue to avert famine, but aid to revitalize Yemeni farmers’ food production is just as urgent a need. Major donors like the World Bank, UNDP and FAO, USAID and all other interested agencies should find ways to help Yemeni farmers and local communities directly, not by imposing outside methods but allowing Yemenis to expand on their own successes.

Reprinted with the author’s permission from Tabsir.net