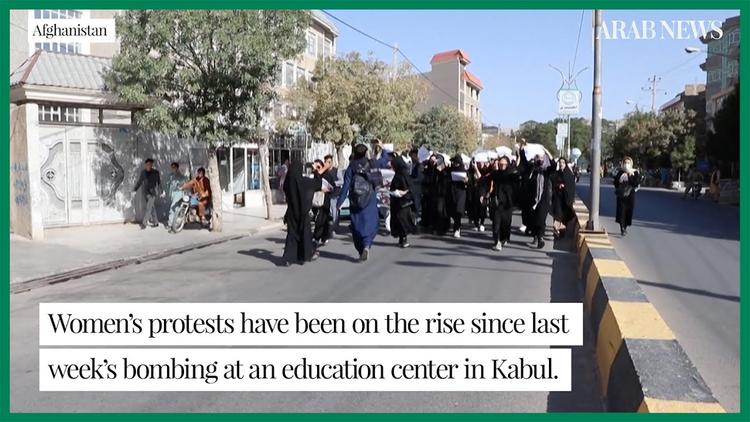 ( Human Rights Watch) – The September 30 suicide attack on ethnic Hazara students at Kaaj Educational Center in Kabul has sparked protests by women and girls in provinces across Afghanistan. The attack, which took place as female students sat for a practice university entrance exam, claimed 53 lives, most of them girls and young women, and injured 110. The exam presented a rare window of hope for girls who had been forced out of school because of the Taliban’s ban on girls’ secondary education over a year ago.

Following the attack, women in Kabul, Mazar e Sharif, and Herat provinces took to the streets, calling for an end to attacks on Hazaras. More protests soon followed in Bamiyan, Ghazni, Nangarhar, and Panjshir. Taliban authorities responded by beating protesters and used live ammunition to break up demonstrations. This kind of brutality has become expected.

Since the Taliban took power in August 2021, Afghan women have been at the front line of resistance to Taliban oppression. They have held peaceful protests demanding equality, rights, justice, and peace. Their protests have continued despite the Taliban’s brutal beatings, arrests, detentions, and abduction of protesters. Chanting “Bread, Work, Freedom,” women have tirelessly fought for their basic rights and for a better and more equal Afghanistan.

In their protests, women have demanded recognition of the right to education and the reopening of girls’ secondary schools. They have called out the Taliban’s lack of legitimacy in the absence of respect for women’s fundamental rights. And they have demanded women’s social and political participation in society.

Across Afghanistan, women are showing that despite the overwhelming threats they face from Taliban oppression, their protests will reflect their overarching message: “Bread, Work, Freedom” for every Afghan.