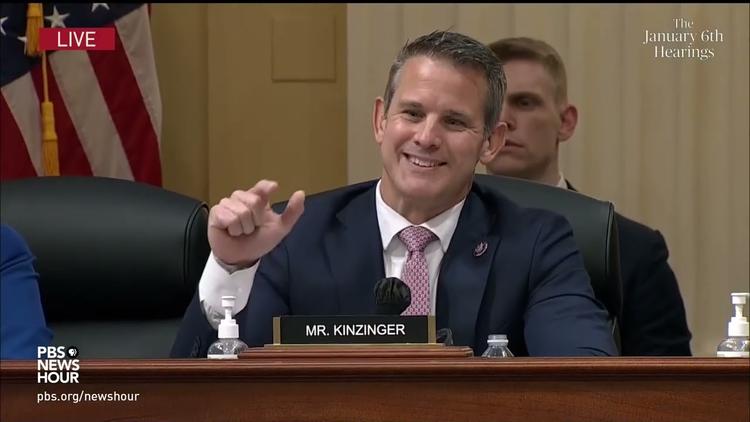 Ann Arbor (Informed Comment) – It has long been known that on November 11, 2020, as it became clear that Joe Biden had won, then president Donald Trump signed an order for the complete withdrawal of US troops from Afghanistan and Somalia before the January inaugural. At the January 6 Commission public hearing on Thursday, Rep. Adam Kinzinger (R-Ill.) highlighted this episode to underline that it shows Trump realized he had lost. There was lots of testimony by Trump aides that he recognized his loss privately, even as he kept publicly denying it and attempting to whip up fascist paramilitaries such as the Proud Boys to disrupt Congressional certification of Biden’s win on Jan. 6.

Rep. Kinzinger is interested in the withdrawal plans because he believes that they further demonstrate that Trump knew he had lost and was rushing to implement his preferred policies before being forced from the Oval Office. This point is important because if Trump is ever charged with seditious conspiracy, his lawyers will attempt to maintain that he was sincere in his belief that he had actually won. The case against him is stronger if it can be shown that he knew he had lost and was acting dishonestly and manipulatively.

So why exactly was Trump so eager to see the troops out of those two countries?

The witnesses did not indicate an answer to this question.

It is my conviction that Trump engaged in magical thinking about the troops abroad still prosecuting George W. Bush’s “war on terror” (sic). Trump believed that his base, including working class whites, were resentful about the expenditure of blood and treasure abroad, holding that the money should have been spent at home.

Trump was convinced that being the president to get out of Afghanistan would cement his popularity. My guess is that the sudden withdrawal order of November 11, 2020, was intended to bolster Trump’s claim on a second term in 2024. He wanted those boasting rights, and did not want to see credit for getting out go to Biden. Ironically, the Pentagon’s refusal of his order saved him from a debacle, the same one that later befell Biden.

Another irony: I think Trump was wrong, and that his base was not particularly exercised about the remaining few thousand troops in Afghanistan. I don’t think there were strong public passions about the Afghanistan War, unlike with Iraq. I remember pundits wondering whether Biden’s abrupt withdrawal and the subsequent takeover by the Taliban would be an issue in the 2022 midterms. I thought to myself at the time that no one would remember that issue a year later, or care. I could tell, because with rare exceptions my blog posts on the Afghanistan War never went viral the way my analyses of Iraq did. The public wasn’t interested.

I earlier laid out the timeline:

“1. in December, 2018, Trump ordered that half of the then 14,000 U.S. troops in Afghanistan be brought out. The decision so angered then Secretary of Defense James Mattis that he abruptly resigned his position. Then Chairman of the joint chiefs of staff Joseph Dunford said he had not recommended the halving of troop strength and that he thought it was a bad idea, both because it would cause instability in South Asia and raise the risk of terrorism against the U.S.

2. Through 2019, Trump and his officials negotiate with the Taliban. In September, Trump calls off the talks after a Taliban attack on U.S. troops, but by December his informal envoy Zalmay Khalilzad announces that negotiations have resumed. Khalilzad, a former US ambassador to Afghanistan and Iraq, had no official position and no particular authority. He is said to have been angling to become secretary of state in a second Trump term. The US-Taliban talks were criticized for being bilateral and for excluding the official government of Afghanistan, headed by Ashraf Ghani.

3. On February 29, 2020, Trump announces peace in our time, with the signing of a peace treaty with the Taliban. The BBC wrote, “President Trump said it had been a ‘long and hard journey’ in Afghanistan. ‘It’s time after all these years to bring our people back home.'”

The BBC quoted Trump further about the US combat mission against terrorists in Afghanistan; he said, “it was ‘time for someone else to do that work and it will be the Taliban and it could be surrounding countries. I really believe the Taliban wants to do something to show we’re not all wasting time.'” Trump did say, “If bad things happen, we’ll go back with a force like no-one’s ever seen.” … In the treaty, Trump promised to pull 8,500 troops out of the country in about 4 1/2 months. … In return for these steps and for a promise that the U.S. would withdraw completely from Afghanistan, the Taliban pledged not to attack the remaining U.S. troops in the country by May 1, 2021.”

I concur with Kinzinger’s point, that Trump’s order for withdrawal shows that he knew he lost to Biden. He thought of those withdrawals as a diadem in his crown, as a guarantee of his popularity, and as a prize he was unwilling to allow Biden to reap.

Like most of his ideas on foreign policy, this idée fixe about an Afghanistan withdrawal being the route to glory was always daft. How bizarre his reasoning was is demonstrated by his conviction that the Taliban could be persuaded to carry out counter-terrorism operations in the country on behalf of the United States.