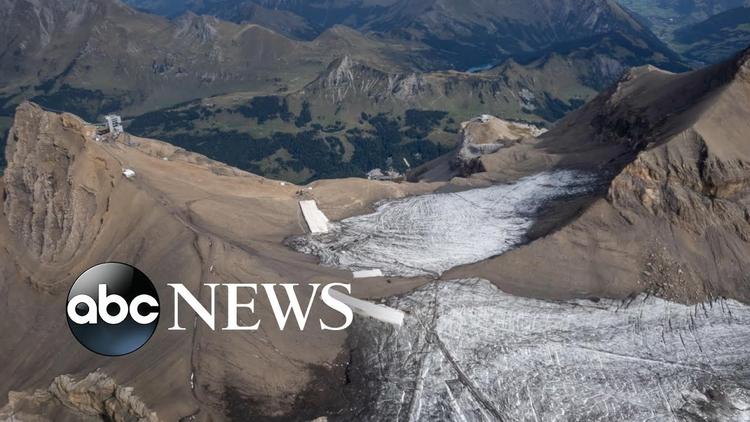 Ann Arbor (Informed Comment) – William J. Ripple et al. writing in BioScience warn that we are deep into a climate emergency, which they call “code red on planet earth.”

They point to the increased frequency and severity of weather-related disasters, producing “untold human suffering.” Human-driven global heating, especially in the Arctic, which is warming four times faster than the world average, has disrupted the stability of the jet stream. It sometimes jumps far north, and sometimes like a moebius strip it folds back on itself, producing deadly heat waves in unlikely places like Vancouver and drawing the monsoons up to flood Pakistan in biblical proportions. Europe, they point out, was set aflame this summer, while Australia (which was set aflame earlier) faced destructive flooding.

The authors point out that any of these events would once have been extremely rare. We’re seeing thousand-year and five-hundred-year events occurring annually. This is not normal.

The authors track 35 “vital signs” of the planet, and they find that 16 have skyrocketed to unprecedented extremes.

They lament that of the three most powerful heat-trapping gases we spew into our air– carbon dioxide, methane, and nitrous oxide — all three were present in the atmosphere in record concentrations in 2022. In particular, parts per million of carbon dioxide hit 418 this year for the first time since records began being kept in the early twentieth century, and likely for the first time since 3 million B.C. There is a lag between an increase in the CO2 ppm and the heating of the earth, since the oceans in particular are cold and slow to heat up. Over time, however, they are rapidly warming, especially the surface waters. Ocean heat has reached record temperatures this year, and over all, 2022 will likely be one of the hottest years on record. Surface heating has knock-on effects, they point out. As the earth’s surface has gotten hotter, mosquitos’ tendency to transmit dengue fever has increased significantly since 1980. More tropical diseases, and more zoonotic cross-over diseases from animals to humans can be expected as the planet heats up. 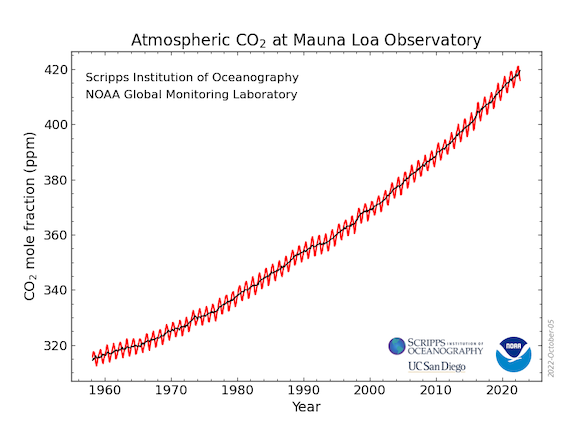 In contrast, the parts per million of CO2 in the atmosphere seem to have been around 260 to 270 for the past 10,000 years, during which human civilization emerged. It is not clear how well we can keep civilization intact at 418 ppm of carbon dioxide. Already, the insulation around electrical wires is just melting in Upper Egypt in the summers. Severe weather can also knock out electricity for months, as happened in Puerto Rico because of Hurricane Maria.

The number of severely hot days has doubled since 1980, and just in this century they killed approximately half a million people.

The severe weather produced by global heating does not necessarily occur on a one to one basis, they warn. That is, an extra degree Fahrenheit of heating does not smoothly equate to such and such number of wildfires or floods. They see a pattern where in some times and places the effects of the heating can abruptly scale up. They see this “leap” in the United States, which is seeing both massive wildfires and massive flooding.

The problem is that we are seeing these extreme weather events because the earth has been heated by about 2°F. (1.1C) since the beginning of the Industrial Revolution.

The authors also warn of negative feedback loops. If Jair Bolsonaro wins Sunday’s presidential election in Brazil, and continues to authorize the destruction of the Amazon rain forest, at some point it will flip from being an absorber of CO2 to being a producer of it, which will broil us all. Likewise, if enough of the Arctic ice sheets melt, the brown earth will show through over large expanses of the North Pole. Whereas the white snow reflects sunlight and causes it to radiate back into space, and so has a cooling effect, brown earth absorbs the sun’s heat and contributes to the warming of the planet’s surface.

That is why the authors say that the coming changes are not serial (1, 2, 3, 4, 5…) but rather can involve sudden jumps in the metrics.

In order to keep climate change from overwhelming us, they argue, we need to slash our CO2 emissions to zero, and the sooner the better. They recommend a steep carbon tax and an end to the subsidies for oil and fossil gas. They point out that some of the proceeds of a carbon tax can be shared with workers to offset the increasing costs they face because of the climate emergency.

Resilience will also be necessary. We may have to build sturdier houses to resist hurricane damage. That will be expensive, but not as expensive as having constantly to rebuild them. We need irrigation engineers to prevent flooding such as struck Sindh and Baluchistan in Pakistan this summer. We’ll likely have to bury electric wires. Maybe in some places we’ll have to go full hobbit and build homes partly underground to reduce their exposure to metastorms.

The biggest step we can take, however, is to reduce carbon dioxide emissions quickly. This task is not for individuals but for the government. November 8 is coming up. Vote for candidates who take the harms of the climate emergency seriously and who pledge to take radical steps to get us to carbon neutrality. As for the climate change deniers, relentlessly vote them out. They are not working for you, anyway, but for Big Oil.