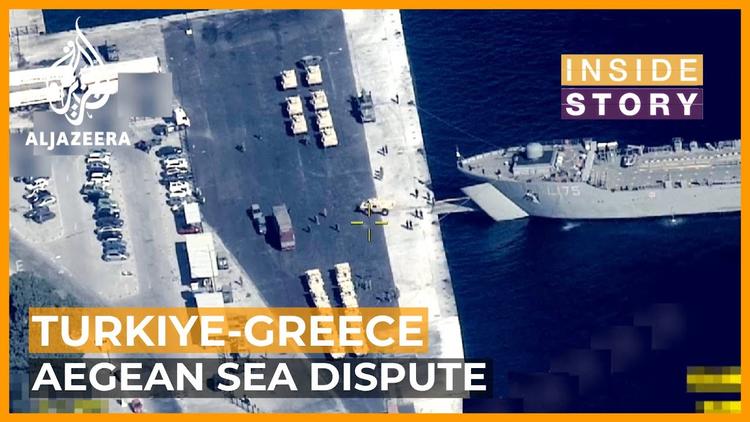 ( Middle East Monitor ) – For the first time in its long history, NATO’s unity is under threat as a result of the rift between two of its members; Turkiye and Greece and their manoeuvres in the Aegean Sea. The latest crisis between the two began in August when Turkiye accused its neighbour of locking onto Turkish fighter jets with its Russian-made S-300 anti-aircraft missile systems deployed on the island of Crete. Ankara also claimed that Greek pilots placed Turkish aircraft under a radar lock over the Eastern Mediterranean during a NATO mission, while Greek planes harassed them during the exercise.

On Tuesday, Ankara summoned the Greek ambassador and protested to Washington after accusing Greece of deploying US armoured vehicles on two Aegean islands near the Turkish coast. Greece, however, said the move was “completely unfounded” and accused Ankara of aggressive behaviour.

In the wider international context, the rift between Turkiye and Greece takes place at a time when NATO is focused on displaying a united front against Russia in the face of its invasion of Ukraine. Russia’s war has directly affected NATO’s unity and priorities. By failing to address the tensions in the Aegean Sea, the differences between NATO members have revealed cracks that Russian President Vladimir Putin will be keen to exploit.

One of the main trigger points in the conflict between Turkiye and Greece is that both will head to the polls for crucial elections next year. Turkish President Recep Tayyib Erdogan is said to be facing a major challenge to his 20-year rule amid the country’s economic woes and immigration problems. Greek Prime Minister Kyriakos Mitsotakis, elected in 2019, reportedly suffered a popularity loss to some degree because of rising energy prices partly driven by the war in Ukraine. In both cases the leaders are playing to an internal audience in terms of patriotism.

Erdogan spoke earlier this week at Teknofest, Turkiye’s biggest aviation and aerospace festival, to say: “Look at history. If you cross the line any further, there will be a heavy price to pay. Don’t forget Izmir,” alluding to a defeat of occupying Greek forces in the western city in 1922.

In retaliation, Greek Foreign Minister Nikos Dendias appealed to NATO, its EU partners and the UN to formally condemn what he described as the “outrageous and increasingly aggressive talk by Turkish officials”.

As a mediator, the US is trying to find a balance between Greece and Turkiye. But, Turkiye’s agreement with Russia on the purchase of Moscow’s S-400 defense system changed the balance in 2017. It led to the US extending a bilateral military agreement with Greece for five years which was ratified by the Greek parliament in the summer. The US also cancelled a deal to supply Turkiye with F-35 fighter jets.

This came as Greek Defence Minister Nikolaos Panagiotopoulos visited the Pentagon to meet Secretary of Defence Lloyd Austin in July, where the two discussed the growing defence partnership between Washington and Athens and the close cooperation based on defence modernisation, according to a statement from the Pentagon.

With regard to the F-35 deal, NATO’s and the US’ concern is not Turkiye. In the broader scheme of things their common enemy is Russia. Three years since Turkiye received the S-400 system, it has still not activated them in an effort to protect NATO’s defence system and unity. But, this is not enough to have sustainable peace in the Aegean dispute. In the evolving Ankara-Athens-Washington triangle, the US should find a balance in a just manner to protect NATO’s unity.