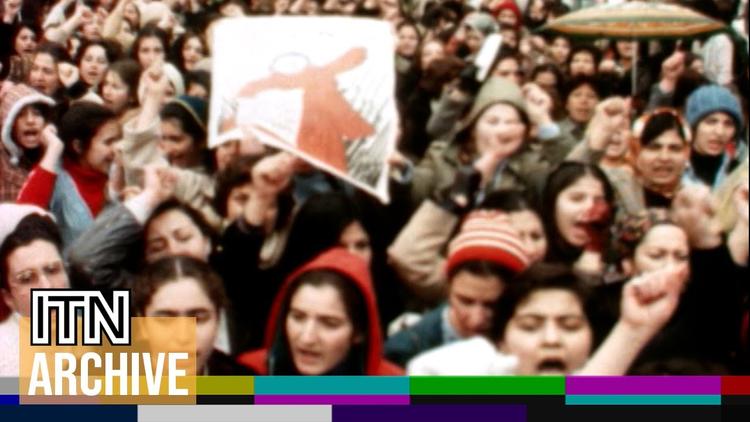 (The Conversation) – The world has been transfixed by images of Iranian women shouting “women, life, liberty,” leading protest rallies, dancing in the streets and burning their headscarves while facing armed soldiers.

The displays of courage by Iranian women are not unlike their massive participation in the 2009 rally against the contested presidential election that year, when the brutality of the regime was symbolized by the killing of young Neda Agha-Soltan, who was shot during the protest.

Today’s ongoing protests erupted following the killing of Kurdish-Iranian Mahsa Amini, who died from the injuries she sustained while in police custody for allegedly violating Iran’s conservative hijab laws.

The public protests continue despite an intensifying and extensive state crackdown that has already killed more than 200 people, injured hundreds and resulted in the arrest of thousands.

In unprecedented actions, many women — young and old — are expressing their support for the protest by cutting their hair, reviving a pre-Islamic practice of mourning by women.

Amini’s killing has sparked the most recent episode of public anger. But the public’s grievances over political oppression, economic hardship, environmental disasters, discrimination against ethnic and religious minorities, corrupt and unrepresentative state institutions and disrespect for the lives and dignity of citizens have led to a number of popular protests over the past few decades.

The Islamic Republic’s tone-deaf response to such protests is evident by its claims that Amini’s death was due to a health condition — akin to the callous coverups following the downing of a Ukrainian passenger plane in January 2020 and violent crackdowns on civilians, including youth. These denials have left many Iranians feeling disillusioned by the theocratic regime.

With women at the forefront, the key demands of the current protests are respect for fundamental human rights, dignity and real change. Iranian women have always participated in protest rallies, but this is the first time their demands have been regarded as the nation’s demands.

Many women poured into the streets to help topple the Pahlavi dynasty in 1979, demanding democracy and freedom of expression with no gender-specific discrimination.

Soon after the revolution, however, the emerging conservative ruling clergy annulled the modest rights women had secured under the previous regime within weeks of coming to power.

While many Iranian women protested these reversals, they received little support from men and other competing political groups that prioritized the regime’s anti-colonial stance and believed women should tolerate injustices, at least temporarily.

Discouraged by men’s indifference, one of the first popular protests against the theocracy took place in March 1979, organized by women. The mandatory veiling that the regime mandated as a symbol of its identity remained a sore spot between the government and the public.

Recognizing that religious extremism often focuses on women’s bodies — not unlike some modern states — Iranian women continued, both from inside and outside formal state institutions, to challenge the reversal of their legal and social rights.

On many occasions, as our research has documented, women joined forces across the ideological spectrum to push for their demands.

For instance, secular and religious women worked together to reform a number of gender-discriminatory family laws in the 1990s and early 2000s. Women’s collaborations also resulted in the creation of a female voting bloc that saw the successful election of the reformist cleric Mohammad Khatami as president from 1997 to 2005, which helped usher in a number of important legal changes and political opportunities.

This development, however, threatened unltra-conservative elites who, under the next president, Mahmoud Ahmadinejad, began to place restrictions on women’s publications and many women’s non-governmental organizations.

The hardliners also harassed women’s rights activists and progressives university student groups. To appeal to some conservative elites, Ahmadinejad also strengthened the state’s security apparatus — including a police force to enforce a strict observance of the hijab — as deemed appropriate by conservatives.

In 2009, women once again felt energized when key reformist presidential candidates, in an effort to gain women’s votes, placed women’s concerns at the centre of their electoral campaigns. However, to their utter dismay, Ahmadinejad was declared the winner, leading to a wave of protests in which women again played a prominent role.

The candidacy of moderate Hassan Rouhani in 2013 for the presidency once again energized women voters, leading to his landslide victory. Shortly after, in 2015, Iranians celebrated the signing of a nuclear deal with the West, their faith in greater economic and social stability partially restored.

The celebrations were short-lived, however, when Donald Trump, United States president at the time, unilaterally pulled out of the deal and reinstated comprehensive sanctions on Iran and its population. This further angered conservative factions and increased their distrust of the U.S.

In the following elections, conservatives sidelined their main competitors and regained control of parliament and the presidency in 2020 and 2021, respectively, albeit with the lowest rate of electoral participation since 1979.

With full control over the state, the conservative faction has implemented a series of restrictions, among them unleashing greater surveillance and harassment of those who challenge the status quo, including the women who oppose mandatory veiling.

The protests that began in September 2022 continue as state violence increases. Despite internet restrictions, Iranians regardless of gender, ethnicity, class, age or ideology have been in the streets across the country’s diverse regions, expressing their loss of patience with the theocratic regime in a seemingly unified voice.

It’s not clear if these protests will lead to a political revolution. To many, the real revolution has already happened, given the broader public’s embrace of women and minority demands in these protests for real democracy and respect for human rights.

The question is whether the solidarity holds — and whether the Iranian regime is this time willing to listen.